Birthday cake cupcakes with sprinkles. A small batch cupcake recipe for birthday cupcakes for celebrating a kids birthday party, or gifting a friend or coworker on their special day! This recipe for 4 cupcakes will come in handy! Be sure to pin it to save for later! 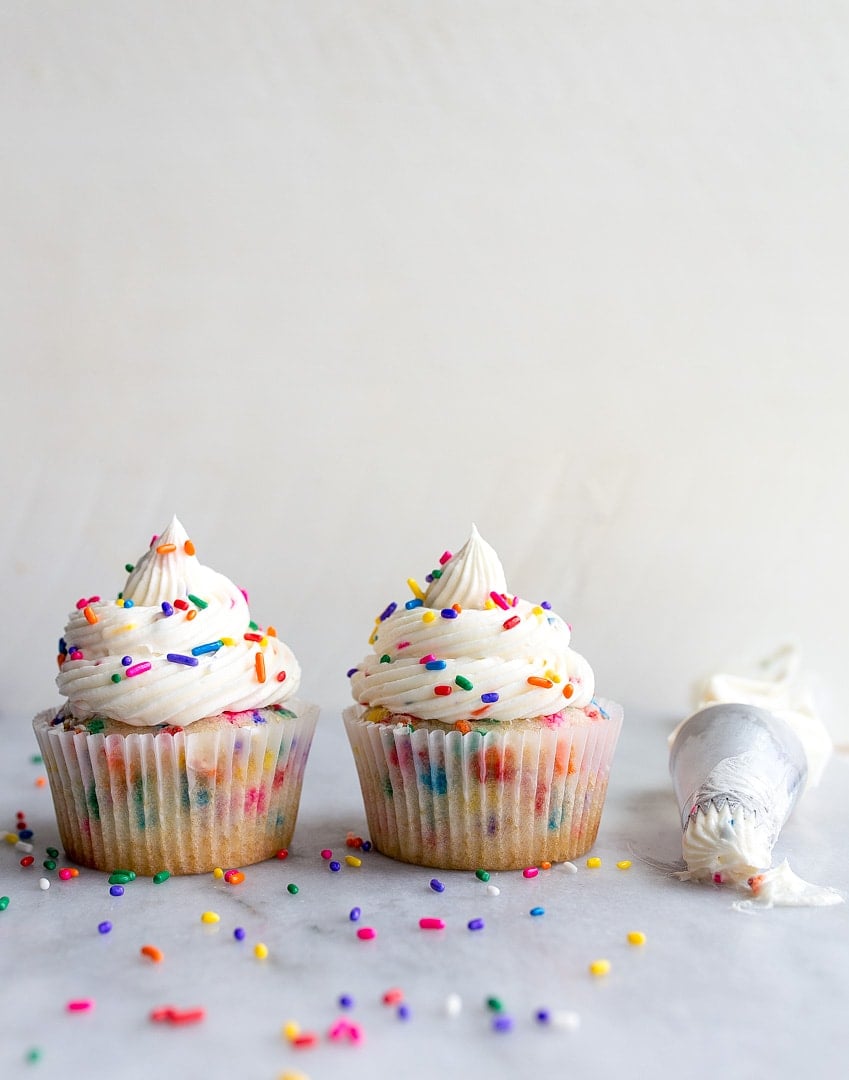 The other day, my daughter and I were invited to a low-key birthday celebration for one of her friends from school. It wasn’t the typical birthday party with a huge cake and formal setting; it was a fun, relaxing play date. Can I admit that these are the only kinds of kids birthday parties I like to attend?

Even though the party was low-key, I still felt like sprinkles needed to be involved in some way. So, I altered my recipe for wedding cake cupcakes to become birthday cake cupcakes with sprinkles. In order to make the cupcakes have a softer texture more similar to cake mix, I use oil instead of butter.

The resulting birthday cake cupcakes recipe is so good, that I just might make these weekly! 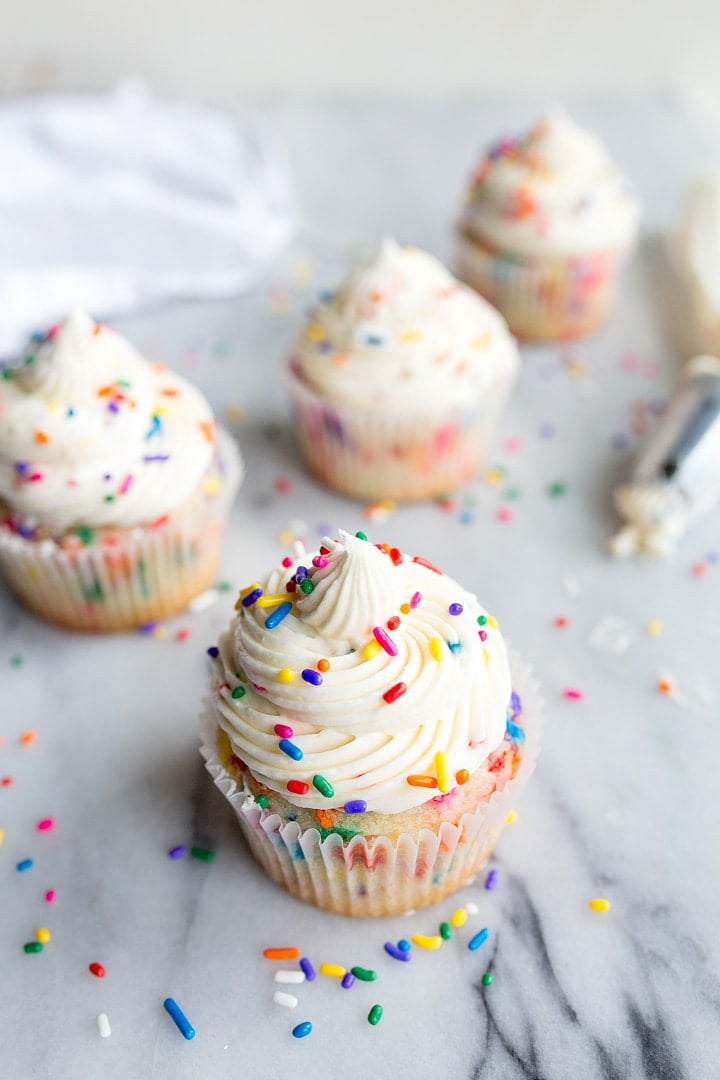 Learning how to make birthday cupcakes at home is a skill that will make you lots of friends in life!

I love that this small batch recipe of cupcakes only makes 4 because kids don’t really need that much sugar on their birthdays. I actually waited to give Camille refined sugar until she was 2 years old. As much as I would have liked to give Camille these, I opted for my refined-sugar free maple syrup cupcake recipe instead as her first birthday cupcakes! (Yep, I’m one of those moms!)

But now that she’s well beyond that stage, I know she’s going to ask for these best birthday cupcakes for her next birthday!

These aren’t just for kids, though! It’s a great birthday cupcakes recipe for adults, too! You can even leave out the sprinkles and make plain small batch vanilla cupcakes, if you want. (But honestly, who doesn’t love confetti cupcakes?) 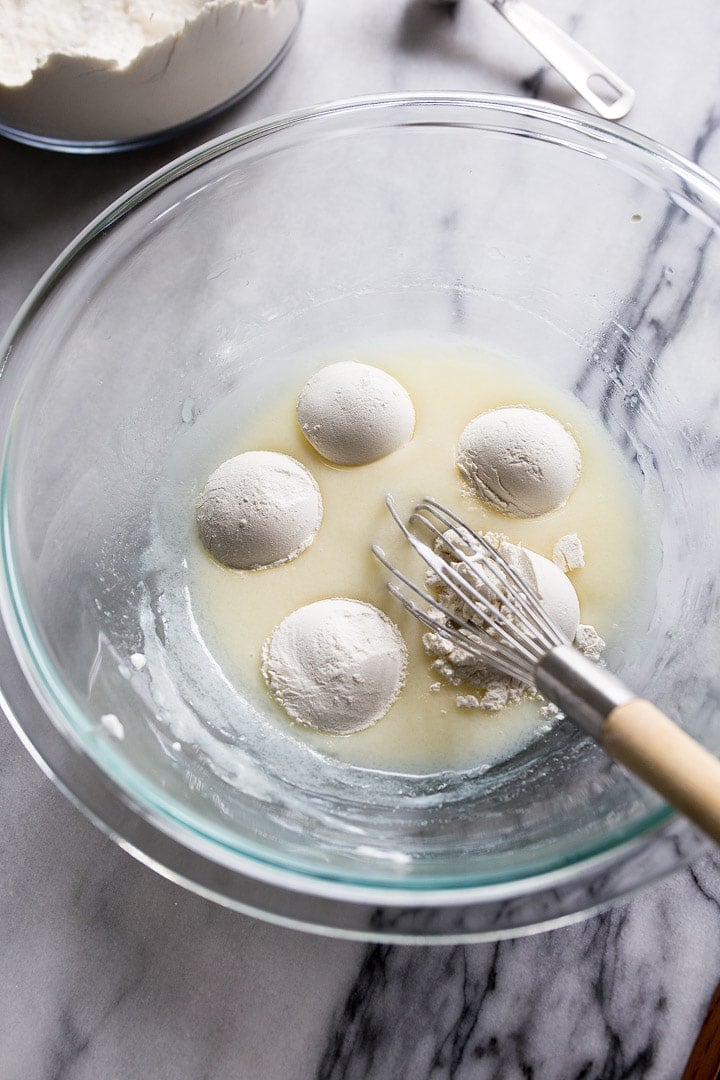 -use oil instead of butter for soft, moist cupcakes

-full-fat sour cream is best, but you can use Greek yogurt

-since we’re small batch baking, I tend to lose count of 6 tablespoons of flour, so I space the scoops out in the batter to help me keep track (see photo above).

-2 full tablespoons of sprinkles is perfect for a recipe for 4 cupcakes. Plus, extra sprinkles in the frosting, too! 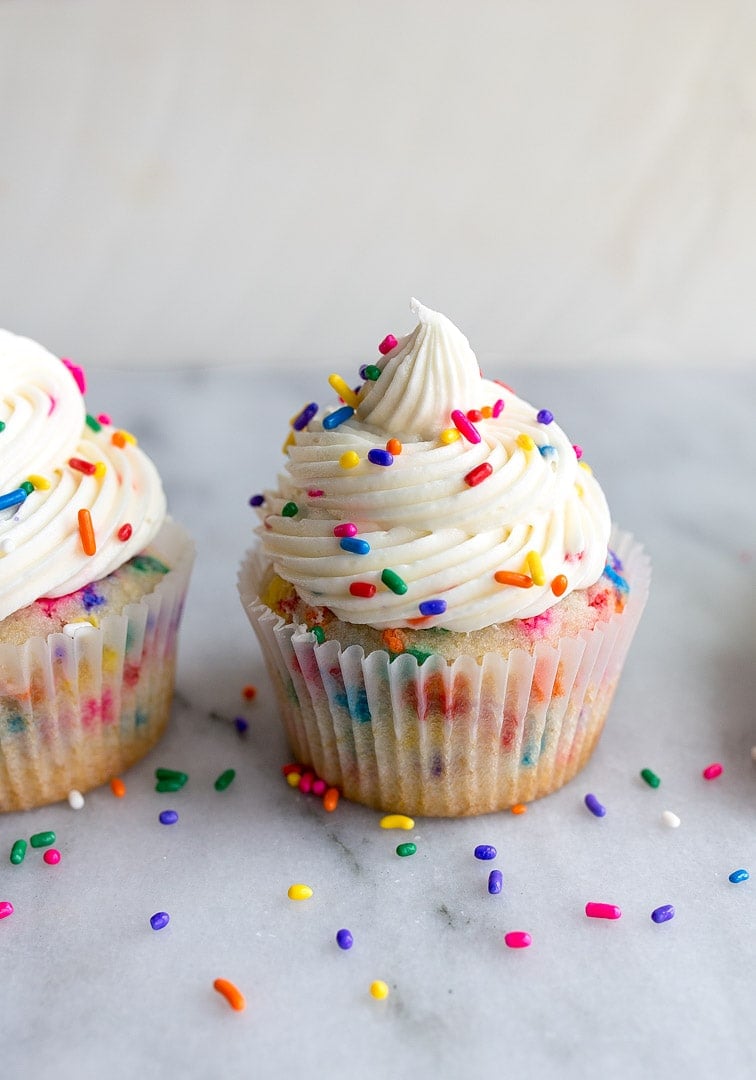 We should talk about this buttercream frosting. It’s soft enough to be piped in a piping bag (I always use these disposable piping bags to make for easy clean-up), but you can also use a knife to swirl it on top of the cupcakes instead.

I used a large 8B open star tip from Wilton to make the swirls of frosting. Start in the center of the cupcake, go around the edge, and then repeat while pulling up to make a pretty pile.

Piping pretty frosting takes practice, so don’t be afraid to scrape it off the cupcake back in the bag and start again!

If you make these cute birthday cupcakes, let me know! I’d love to see them!

For the birthday cake cupcakes: