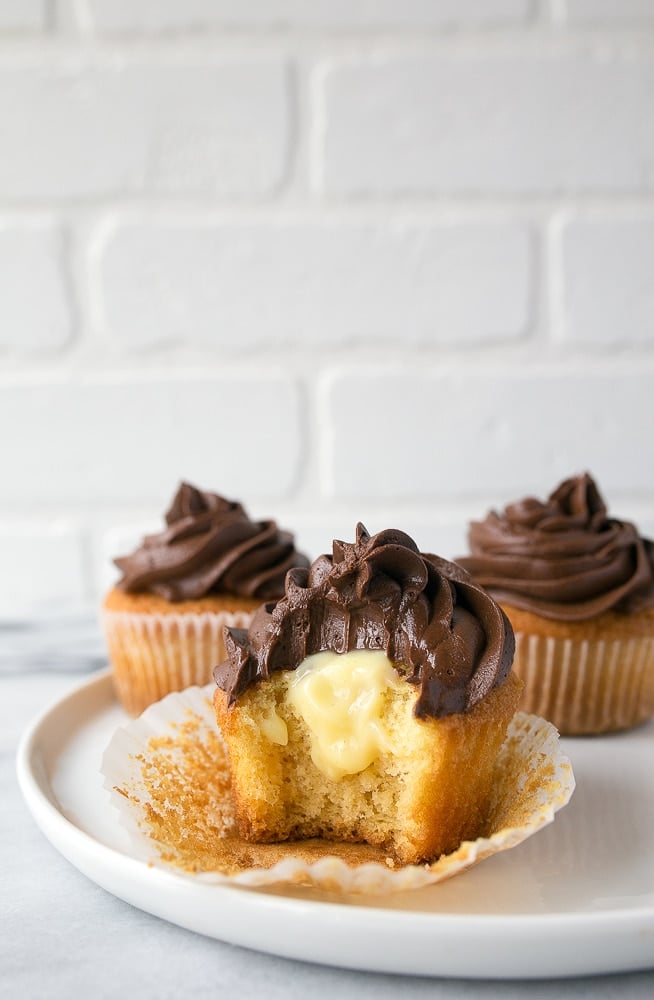 I dripped Boston Cream Pie filling on my shirt, not once, but TWICE while eating these cupcakes.

That's how good they are.

Usually, after cream filling from a cupcake drips on your shirt, you vow to be careful with the remaining bites. I was not. I ate with abandon. I didn't care that I had already potentially ruined my shirt. I just kept eating and eating. I had 2 cupcakes, one right after the other. (And then I pushed a stroller uphill to the park, heh). 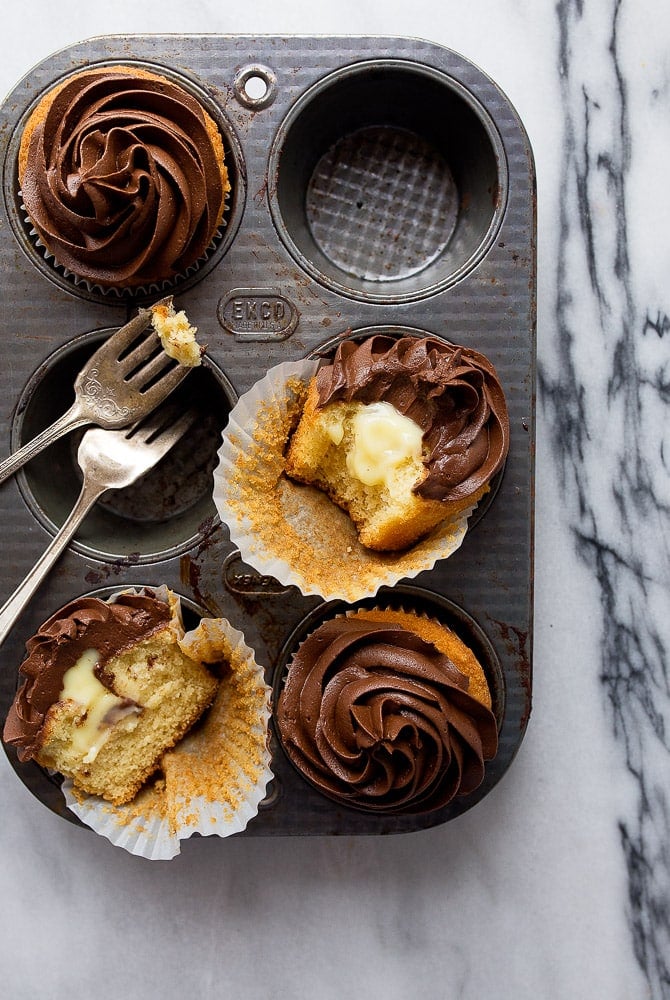 These are so very good.

If we really take a deep look at Boston Cream Pie, it's easy to see why it's one of the best desserts on earth. It's made up of a vanilla cake, vanilla pastry cream, and a chocolate ganache frosting. It hits all the flavor profiles of vanilla and chocolate at the same time.

It's tender cake, creamy filling, and rich frosting all at once. What else can you ask for in a dessert, really?! 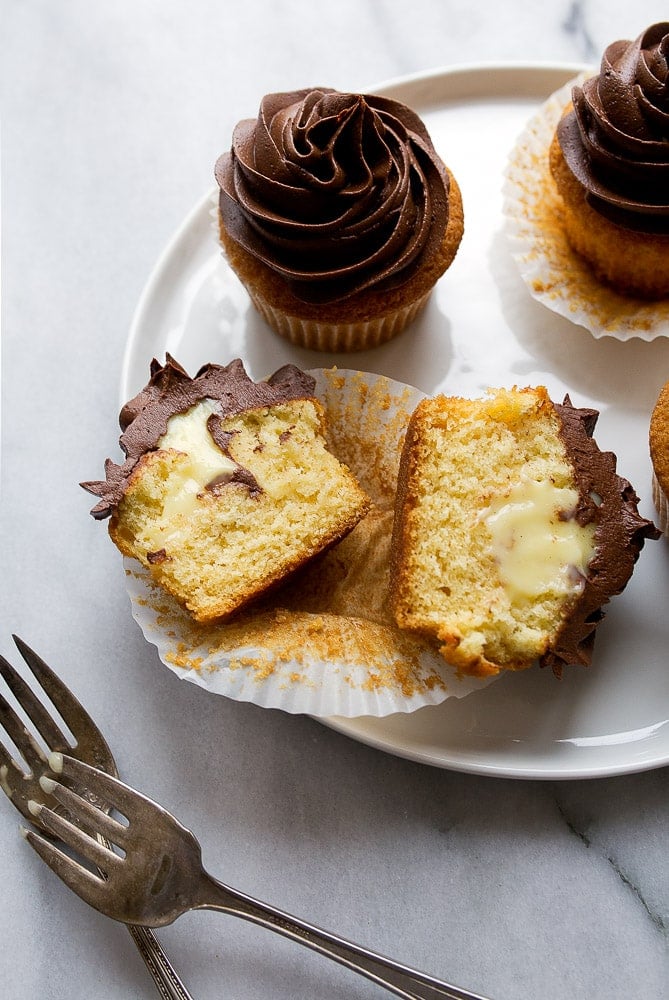 I have a little secret to share. When I dreamt up these Boston Cream Pie Cupcakes (I decided to make cupcakes rather than my usual mini cake in a 6" pan because I wanted swirls of frosting), I planned on making the small-batch pastry cream from my small batch eclairs to stuff them. But, I did something naughty. I bought a box instant pudding instead.

I feel a little guilty, but it wouldn't be right to spend over an hour making 4 cupcakes that will be eaten in 4 minutes. It felt right to take the easy way out. I saw at Target that Jello is making these new 'natural' pudding mixes, and something about the packaging just lured me in. (No, this isn't sponsored in any way, but this is what I'm talking about). The mix says to use 2 cups of milk, but I used 1 ½ so I would have a thick pudding closer to pastry cream. I don't regret it!

The thing is, you can't not smile while eating these cupcakes. And you also can't over-do it because the recipe only makes 4 cupcakes. You don't have to say it. I know I'm your girl. 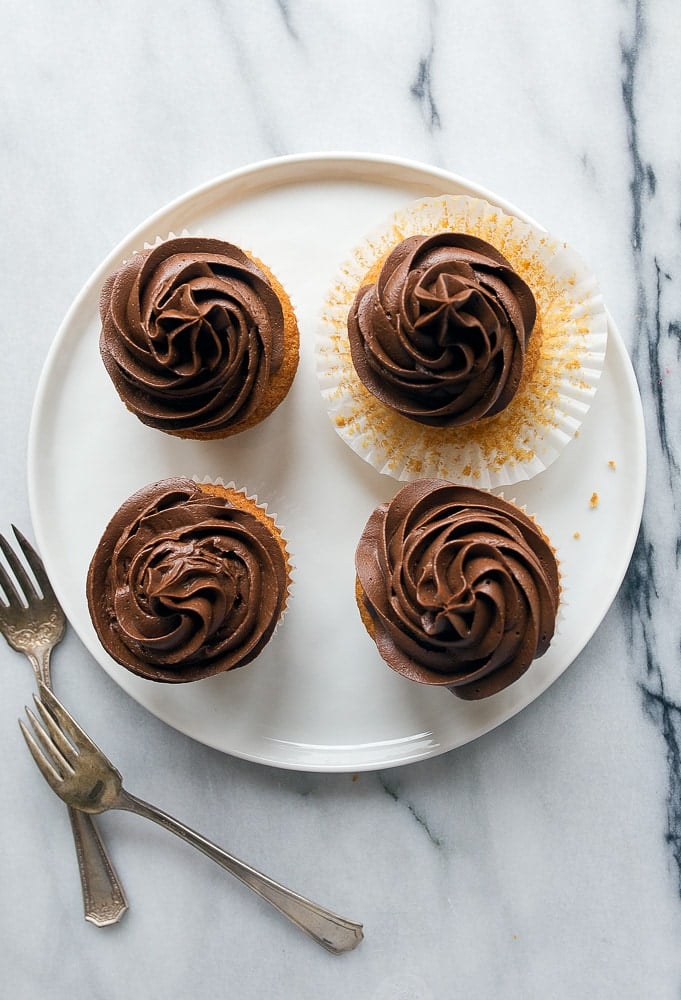