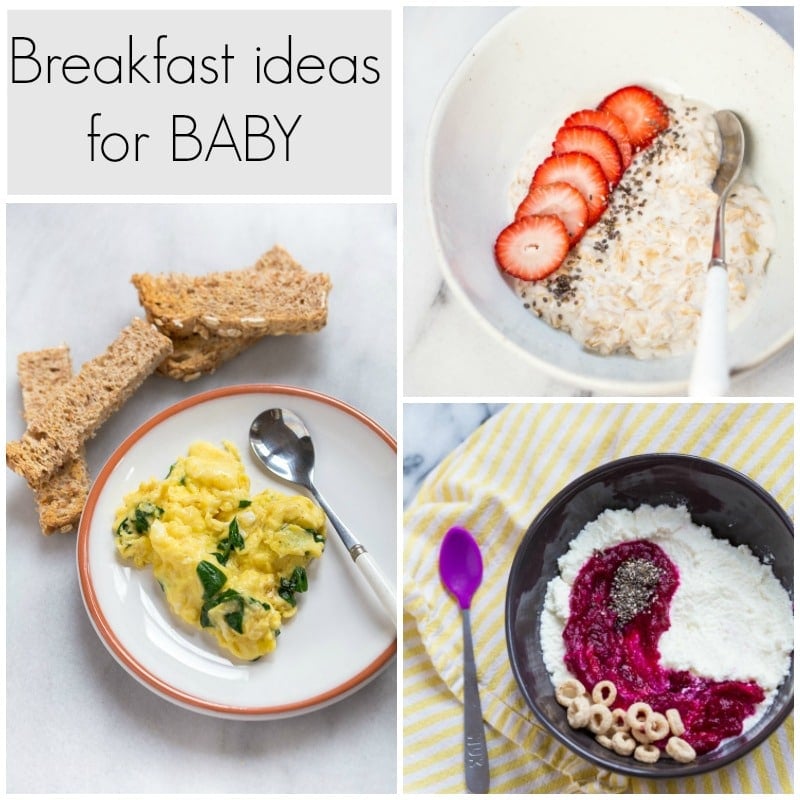 When it comes to feeding my almost-11-month old, variety is becoming a thing. I'd rather have Camille eat a few bites of many foods than an entire bowl of the same thing. Exposing her to food that varies in taste, texture, and temperature is key to avoiding a picky eater, in my opinion.

Camille has not reached the lovely age of 2 when kids start refusing all new foods, but I have hope we can sail through the brief phase quickly. Right now, I'm building her 'food bank' with a huge variety of foods to help deal with future eating problems--at least that's what I'm telling myself.

And as luck would have it (maybe), she will only eat a few bites of the same food a few times, before wanting something new. In most cases, I can revisit the original thing she was eating, but not without a few bites of something else. A girl likes variety!

For feeding my baby, I always start with the thing I want her to eat the most of (like, protein), and then move to a side dish for a few bites, and hopefully swing back around to the protein for 2-3 more bites. I finish with fruit or plain yogurt, both of which she loves. I do have concerns that I'm setting her up to always crave sweets at the end of a meal, because I usually give her fruit after lunch and dinner. But, aren't we supposed to get 3-5 servings a fruit a day? How am I supposed to deal? I'm 100% positive these are things you only worry about with the first kid.

I'm also worried she's eating way too much, because she doesn't seem to have an off switch.

Last night for dinner, she had: 2 cubes of baby Bolognese with spaghetti squash, grass-fed cheese chunks, a few florets of curried cauliflower, a few bites of pear, a few spoonfusl of plain (grass-fed) yogurt, and a chopped date. She also grabbed a few chickpeas off my plate. Today for lunch, she had a sweet potato-grain bowl ( I shared the recipe on instagram), banana slices, pineapple cubes, cheese chunks, and a (low-salt) brown rice cake with a smear of peanut butter. (Thank you, Jesus for giving me a baby without nut allergies!)

I remember when she was 6 months old and first getting into solid foods, and I felt so frustrated by the 'wait 3 days and see' before introducing a new food. That was torture for me. I wanted to give her the world of tastes! Fast forward to today, and this kid happily eats her dinner plus as many bites of ours as we give her. In the beginning, it was always fruit puree in oatmeal for Camille for breakfast. Now, she can have anything she wants with these baby breakfast ideas!

These are her top 3 favorite breakfasts lately. I hope they inspire you! I eat the same thing right along side her. Have you ever seen this?: 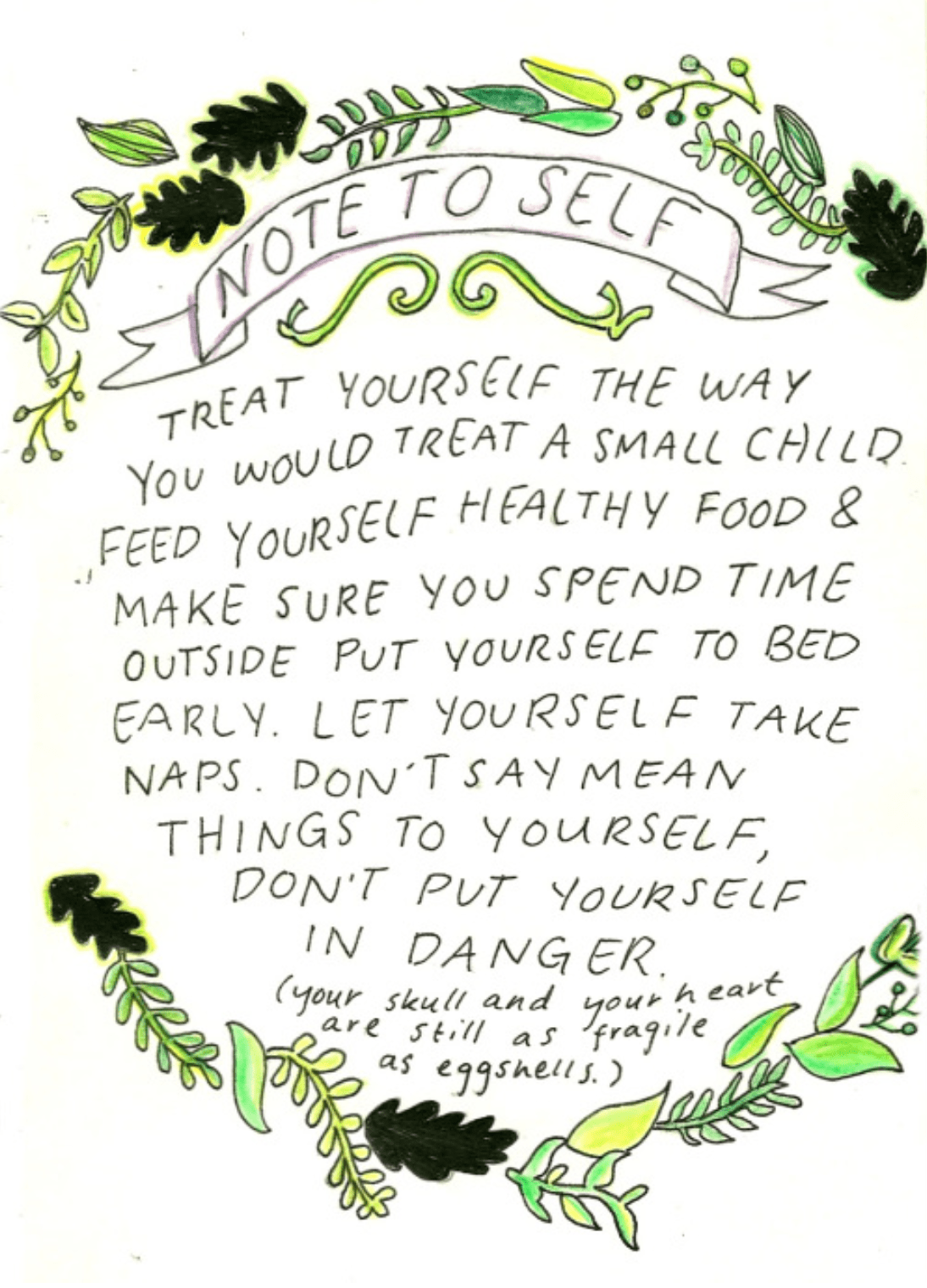 I've been living by it lately, and I've been feeling so much better! I put a lot of effort into making sure Camille eats healthy, balanced meals, but then I was eating frozen hash browns and gulping black tea with tons of cream. No wonder I felt exhausted! Now, I eat almost the same thing she eats (though, a lot more of it!), and drink tons more water! When I fill her sippy cup, I fill my glass water bottle. These baby breakfast ideas are great for Moms and Dads, too. 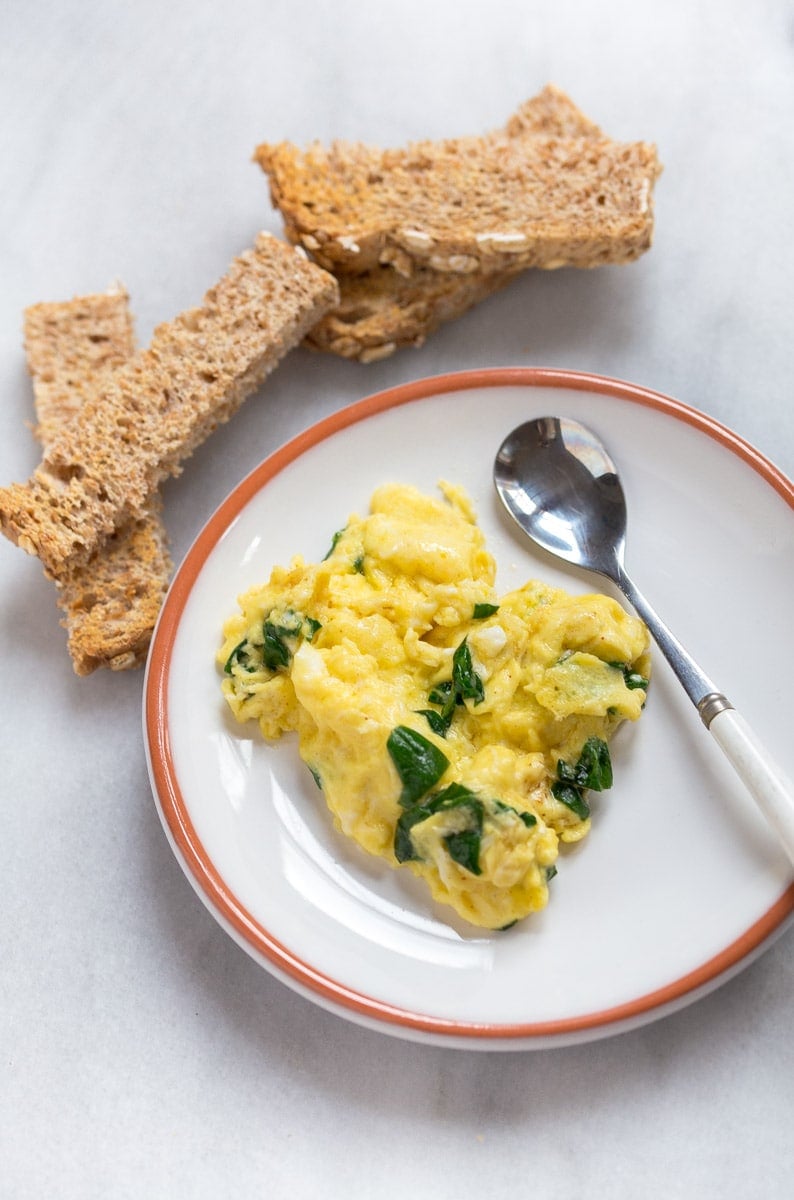 Most commonly, I stir in finely chopped spinach or kale. Once, I used leftover steamed artichoke hearts from dinner. While it was incredibly delicious, artichokes make eggs grey. I'm lucky she ate it (but probably because she saw me gulping my serving down!). Another combination we love is scrambled eggs with sauerkraut.

I read somewhere on the internet that you shouldn't give egg whites to babies younger than 1 year. I asked my pediatrician, and she pointed out that many of the articles on food allergies on the internet are several years old. The new paradigm for feeding kids is to expose them to everything with abandon (except honey). So, I got the green light for scrambled eggs, and picked up some local eggs from pastured chickens.

Let's talk about raw vegetables. I feel a little funny about raw greens for baby, since they are a common source of food-borne illness, so I always add them when the butter melts to saute before the eggs go in. Maybe I'm paranoid, but I also have a Master's degree in vegetable production and have spent a fair amount of time in spinach fields. ;)

More finickiness: there is only one brand of store-bought sliced bread that I deem acceptable for anyone on earth. It's called Ezekiel bread, but it also has other monikers, like 'sprouted grain bread.' The only ingredients are sprouted grains, yeast and water. I am so disgusted when I read labels on sliced bread at the grocery store. But Ezekiel/ sprouted grain bread is made of real ingredients. (I'm definitely not being paid to promote them; I just believe so much in it). I toast one slice, slice it into soldiers and she gnaws on it. She usually only eats 1-2 sticks.

I generously spread her toast with grass-fed butter or coconut oil, whatever we're in the mood for. 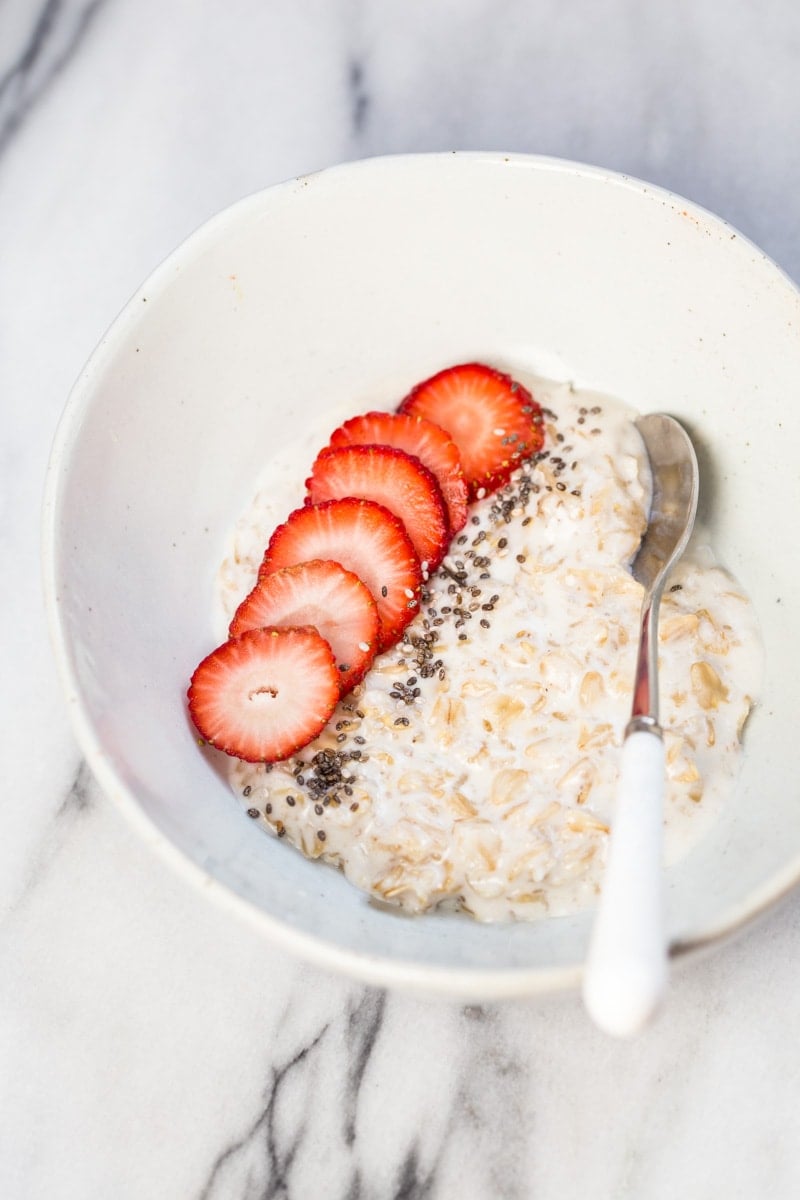 Oh, Camille loves a good bowl of oatmeal. I make it with full-fat coconut milk from the can and seasonal fruit. Sometimes stir in chia or hemp seeds for fun. I usually finish with a small dollop of coconut oil on top. She laps this up! Of course, the day I made the bowl you see pictured, she sucked all the oats off the strawberries, spit them out, and ate the berries only. But, hey, it was a weird day for her, because she normally gulps down her oatmeal.

This is my favorite discovery yet! I was getting a little bored with our breakfasts, and found a lovely little tub of local ricotta. Heidi's latest cookbook has a recipe for a breakfast ricotta bowl, and I took it and ran with it. This one has cherry-beet puree, a sprinkle of chia seeds for crunch, and a handful of cereal O's. I'm working up the nerve to replace the cereal with finely chopped walnuts. Do you think that's asking too much for a kid with zero teeth?

The cherry beet puree is something I make quite often, and the recipe can be found in my Baby Food Ebook. I always have a giant bag of frozen cherries in the freezer, and we always seem to have a few straw beets in the crisper from making juices. These vegetable-hybrid apple sauces are something I make quite often and keep on hand for her: kale-applesauce, carrot-applesauce, cherry-beet sauce--they're all winners.

I love when we do ricotta breakfast bowls, because Mama's breakfast bowl gets the works! I add a chunk of honey comb, bee pollen, cacao nibs, and sliced bananas to mine. Have I told you how much Camille loves bananas? After eating her giant lunch, the kid will take down an entire banana. She's in the 5oth percentile for weight...I thought I'd just throw that out there. My kid eats a lot.

So, tell me: what does your babe eat for breakfast? And are you eating something healthy right along with baby?