Cauliflower fried rice for breakfast! This Whole30 breakfast option is a fun way to eat eggs and bacon in a familiar way! 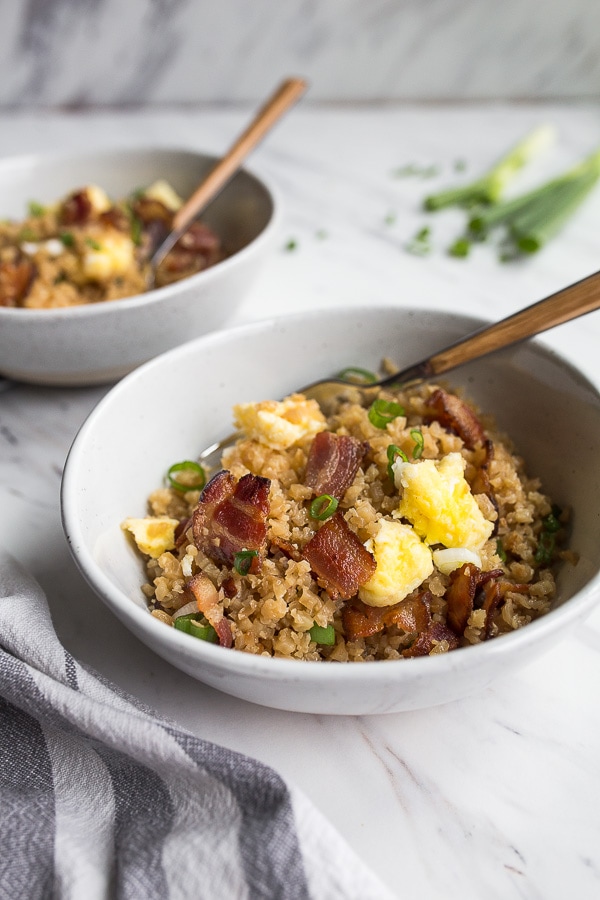 As it turns out, one can only live on so many slices of sweet potato toast during Whole30. I'm craving something warm and salty as freezing rain hits the windows this morning, and this take-out inspired meal is just the thing.

For me personally, the success of Whole30 relies on getting through my first meal of the day. It has to be easy, mindless and use minimal dishes. Please don't make me use a knife in the morning--kitchen scissors are okay, though. (Side note: I use kitchen shears to cut bacon and herbs when I don't want to use a knife). I know that other people struggle with the 3pm dessert craving, or the last meal of the day. It's important to know yourself and identify your weak points. If we attack our weaknesses head-on, we have a better chance of success. 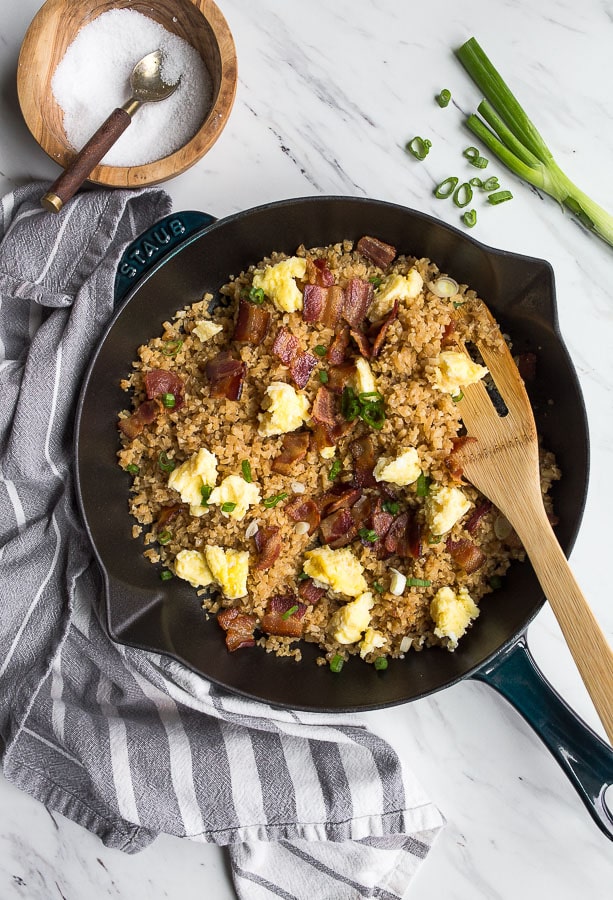 Every day, after I finish a Whole30 breakfast, I feel calm and ready to tackle the rest of the day. I'm also armed with Tracy's list of Whole30 snack ideas. I love that Tracy's snacks are actual real food and not random food combined that's meant to taste like a food you used to be able to eat before you decided to do Whole30. Heh.

To be perfectly honest here, when you already eat mostly healthy and homemade food, Whole30 isn't too big of a challenge. What I realized is that I use grains as a crutch. I also use potato chips as a crutch at snack time instead of something that would actually nourish me and make me feel better than gobs of salt, but that's another story.

Fried rice was such an easy lunch or dinner for me, but it's also seriously lacking in the vegetable department. That is, unless you count the 1 carrot and handful of peas I sometimes add that then gets divided between 3 bowls. So, using cauliflower instead of rice actually makes me feel better because I know I'm eating a vegetable. The taste is remarkably similar, too.

How to make cauliflower fried rice:

I hope this Whole30 breakfast recipe carries you through another week of the challenge. I've got plenty of lunches and dinner recipes coming soon, too! Stay tuned!

*If you can't find cauliflower already 'riced,' check the frozen vegetable section. If you still can't find it, grab a 1-pound head of cauliflower, cut it into chunks, and then pulse it in the food processor until it resembles rice.

**Coconut aminos are the Whole30 version of soy sauce. Use soy sauce if you're not doing Whole30.