Chocolate cream pie recipe for two, made in a mini 6" pie pan. Scroll down for a chance to win a mini pie pan! Don't miss the how to video to the right! 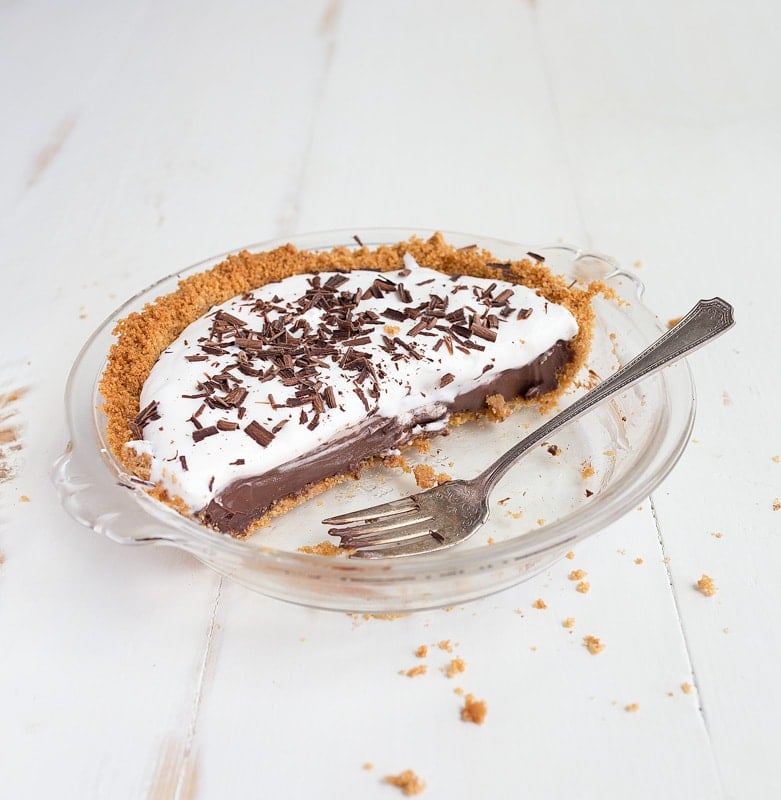 I don’t get to say THANK YOU enough around here.

And before you write this off as some blanket ‘thanks for visiting my site’ letter, please, sit and stay awhile.

While I am grateful you are here, there were a lot of people here before you.

Mainly, my grandma. She small-batch baked. She was forever cutting recipes in half because it was just her & my grandpa. Even when my Mom was in the house, she made small batch recipes because 3 people don’t need 3 dozen cookies.

This small batch dessert thing is in my blood.

This mini 6” pie plate pictured in these photos belonged to my grandma. My mom grew up in the 1950s; I want you to know that someone else was small-batch baking and buying mini pie plates even back then.

So, while it seems like a mini pie plate is something kitchsy found in a hobby store, I’m here to tell you that it’s been around for a while.

I was a single grad student when I created this site. I started it because I was scaling down my mom’s dessert recipes while living far away from home in California.

The first recipe I ever scaled down was her Texas Chocolate Sheet Cake into 2 oversized ramekins. They’re 10-ounce ramekins, and I don’t even know how they found their way into my kitchen. I certainly didn’t purchase them with the intent of ‘blogging’ about it and taking pictures. They just appeared in my kitchen.

It took me 3 tries to scale the recipe down. I ate the first successful attempt while reading The Pioneer Woman’s blog on my green IKEA couch, and thought, "Hey, I wanna share recipes too! Maybe someone else out there wants a small cake instead of a big one".

It was very humble in the beginning. It was honest, pure, and from the heart. 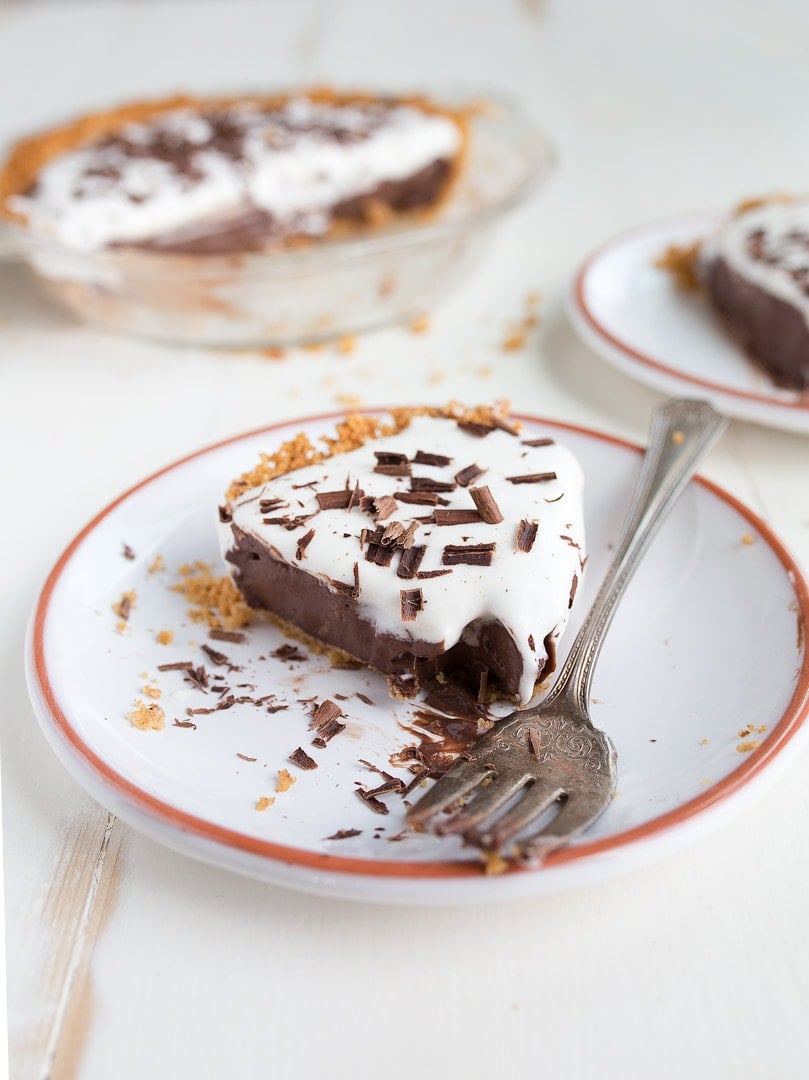 And, I don’t exactly know what happened, but this site here brings me a lot of heartache.  Whether it’s the nature of owning your own business or the comparison trap, this site floods and haunts my brain all at once.

Sometimes I need a big glass of wine and a benedryl to get some relief. Sleep is the only relief because spending time doing something else besides working is ineffective because of guilt. I can take my kid to the playground but if mentally, I feel like I need to be working, it’s not the same.

I’m good at scaling down recipes and it is a true source of joy for me. When I make a giant recipe for cookies or a big 3-layer cake, it makes me angry. I hate having to scoop the cookie dough so much, in and out of the fridge, washing the baking sheet between batches (because a hot pan makes cookies spread too much while baking, you know). And while I do like making big cakes on occasion, the amount of ingredients astound me. Three cups of flour is a mountain to me. It doesn’t feel right in my hands. I can’t even count that high when I’m baking; I have to count out loud and even then, I mess up frequently.

Anyway, I’m here to say thank you to my grandma for instilling in me the love of small-batch baking. Though I don’t remember her doing it much as a kid, I know she’s the source of all things.

I don’t talk about it much (and I have no idea why), but my grandma and her sister ran a very famous restaurant in Dallas. When my mom was little, Rose’s Bluebonnet Sandwich shop was the place where all downtown Dallas workers stopped by for a plate lunch. Rose got up early and flipped the barbecue in the smokers; her arms and hands were black from the smoke. When Bonnie & Clyde was being filmed in Dallas, she was tasked to feed the crew during filming. Rose fed people well. And my grandma helped her during her entire life.

My grandma helped her fend off the celebrities and press that wanted to sing her praises of the best hamburgers ever, because the two of them really couldn’t handle any more business. I remember my grandma counting tickets at the end of each day, and I think 75-120 burgers was the usual amount. When D Magazine would write about her, the two of them would groan and complain as the line formed out the door. When Don Henley (Dallas resident!) dedicated a song to her burgers at a concert my parents attended, we laughed because we knew Rose was gonna be pissed.

We called her restaurant Rosie’s, never Bluebonnet, and none of us has ever had a  better burger anywhere. 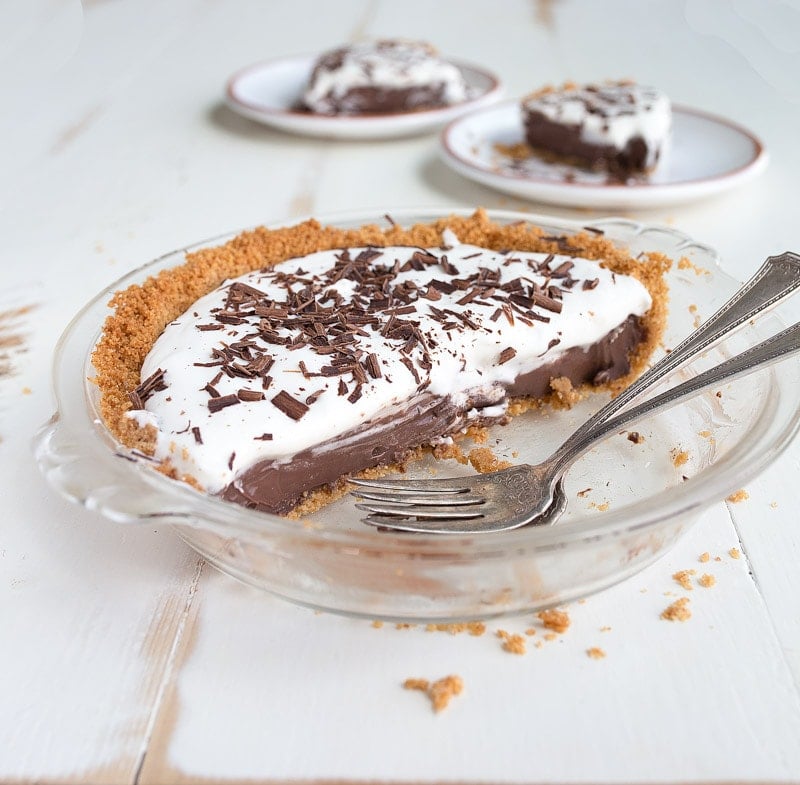 Rose passed when I was in college. I didn’t quite know that the the summers I spent working in her restaurant would mean anything to me later in life. I only knew that all of the adults around me talked frequently about how she should retire and take a break from feeding and serving people. She’d been doing it 'too long,' in their opinion.

But she didn’t. When she called for an ambulance on a Friday afternoon (after lunch service and cleaning up the kitchen), she knew if she went to the hospital, she wouldn’t be coming home. She was right.

I can’t ask for anything. All I can do is what I want to do...what makes my blood pump in the morning, even though there are ugly sides to it.

This is the very first recipe I posted on my site in 2010. Even though the first recipe I ever scaled down was Texas Chocolate Sheet Cake, I chose to share this recipe first as a way to honor to my grandparents. 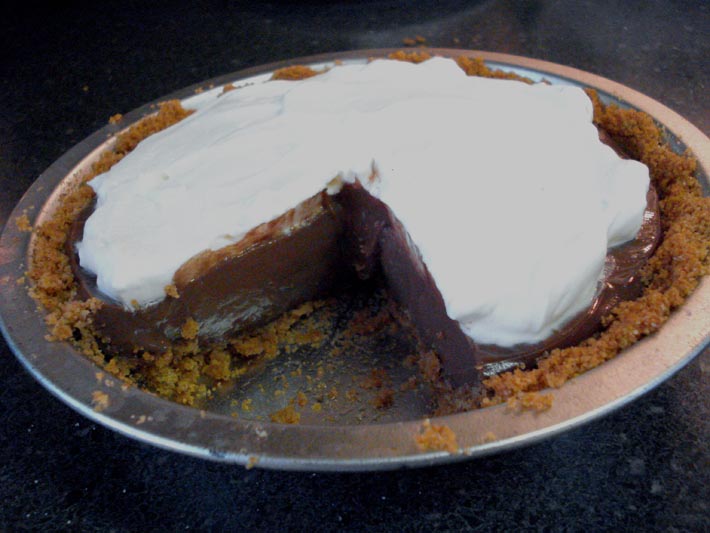 I wrote exactly 46 words about why I chose to make it, including a few lines about why you should make it too—like I was so certain anyone was reading and that I could convince people to do things in their kitchens.

(I chose this recipe to share first because it was my grandpa’s favorite pie that his step-sister Stacey made for him. He served in Pearl Harbor. He was a medic in the Army who very much wanted to go to medical school but the stock market crash had something to do with his cotton farmer daddy not having enough money to send his kids to college. His daddy had two families because my grandpa’s mom passed away early in life and he remarried. When my grandpa came home from the war, Stacey made him this chocolate pie. He ate the whole pie in one sitting. He said the food was awful in the Army, as I imagine most farmer’s kids found out when they served).

Much like I can’t understand now why 2018 is going the way it’s going, I couldn’t predict how much this choice of first recipe to share would give me a foundation today. A place to start over in 2018. A place to draw the line and figure out how I feel and how much I’ll let other people affect that.

I took new photos and we made a quick video (it's at the top of the post)...because I’m still in the business of trying to convince you to do things in the kitchen.

I actually updated the recipe too, because the original recipe had a pudding filling that was too much like pudding. It was delicious, but this is 2018 where food photos count, and pies must hold together in one pretty piece, or else! Only sort of joking, we added an egg yolk and an extra tablespoon of cornstarch. It’s still the best chocolate pie recipe I’ve ever had.

There are still remnants of Rose in Dallas. I’ve just moved back here after 12 years away, and I’ve never felt more comfortable in my own skin in this town. I love Texas. It’s an identity for me.

There’s a restaurant in Dallas called Mesero that has a burger dedicated to her (The Rose Burger). My parents found it by accident while eating there, and listened to the owner describe his love for Rose and her food.

She was a beacon. And she did it all with her sister (my grandma). And neither of them are here anymore to help me out of this mess I’m in now.

But as strong women, they would tell me that women don’t really need help, we just need time to figure things out.

I've been told that I cook like Rose. I'm a mess in the kitchen. I just throw things together and somehow, it works. I cook with a lot of confidence--I generally know what I'm doing in the kitchen and how it will turn out. I'm not afraid to fail, because I'm confident that even my failure will be passable. I'm the person that makes new recipes for company. The stress and anxiety it causes is never worth it, but I do it anyway.

Thank you for being here. Truly.

I hope you enjoy the recipe video with this post. Let me know if you have any questions; I'm here to help. 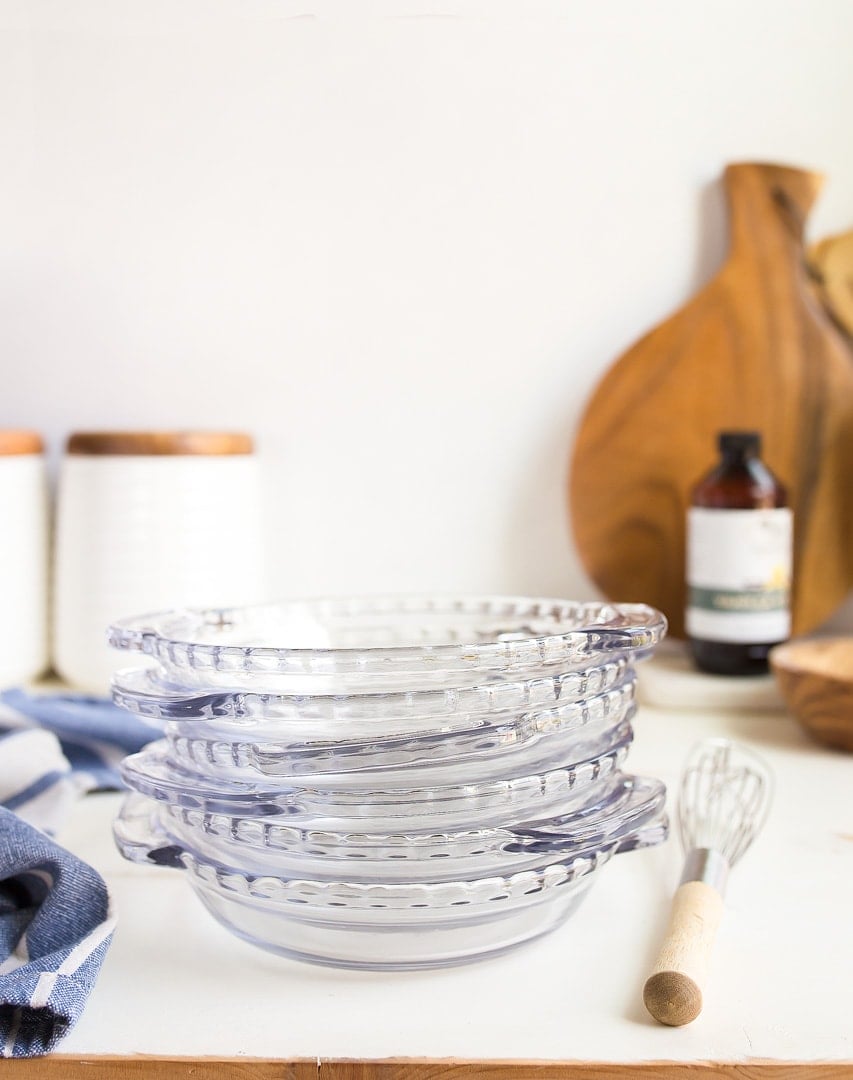