A small batch of creamy, decadent coconut cupcakes that care crammed with coconut flavor! We're using coconut oil, canned coconut milk and toasted coconut flakes for maximum flavor in such a small bite. This recipe makes 4 cupcakes, but you can double or triple it to make more. 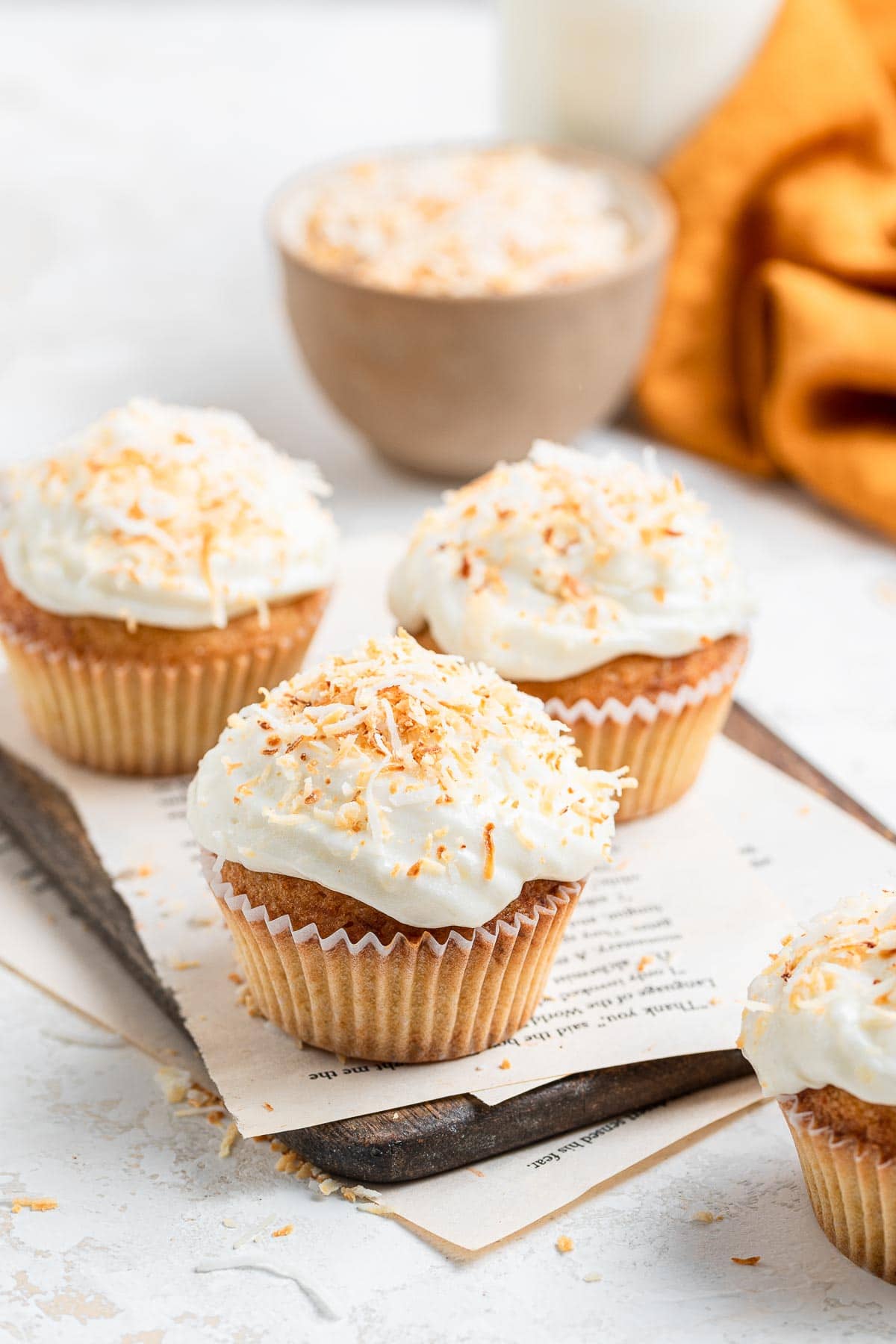 It might not seem like the right time of year for coconut cupcakes, but we have a tradition in the South of coconut cake for Christmas. I'm not quite sure if it's because the long, cold days of winter mean hardly any fruits are in season, so coconut seems like a great choice. Or, if a tropical escape to the islands with coconuts and pineapple becomes very enticing during the cold winter makes us crave coconut desserts. Either way, coconut is common in cold months.

Furthermore, every December, Southern Living magazine has a white cake with coconut on the cover. I look forward every year to how they decorate the cake. Making a giant 3 layer cake is always such a big task, so I'm happy to make this recipe for a small batch of coconut cupcakes. The recipe makes 4 cupcakes, but you can double or triple it to serve more. In our family, we often have a dessert buffet table at holiday events, so small batches of a few different types of desserts suits us nicely.

How do these coconut cupcakes taste?

I really want to talk about this, because the texture of these cupcakes is unique. They are not light and super fluffy like a cake mix cupcake. I find light and fluffy cupcakes boring and too airy. However, these cupcakes are not super dense like poundcake, either. They fall somewhere in the middle, and they're perfect. The structure of the cake holds the pieces of coconut flakes, so that it's evenly distributed in the cupcake and doesn't sink to the bottom. Their texture is like a cake that is sturdy enough to hold filling. It's like a slice of coconut cake that you can hold in your hand. 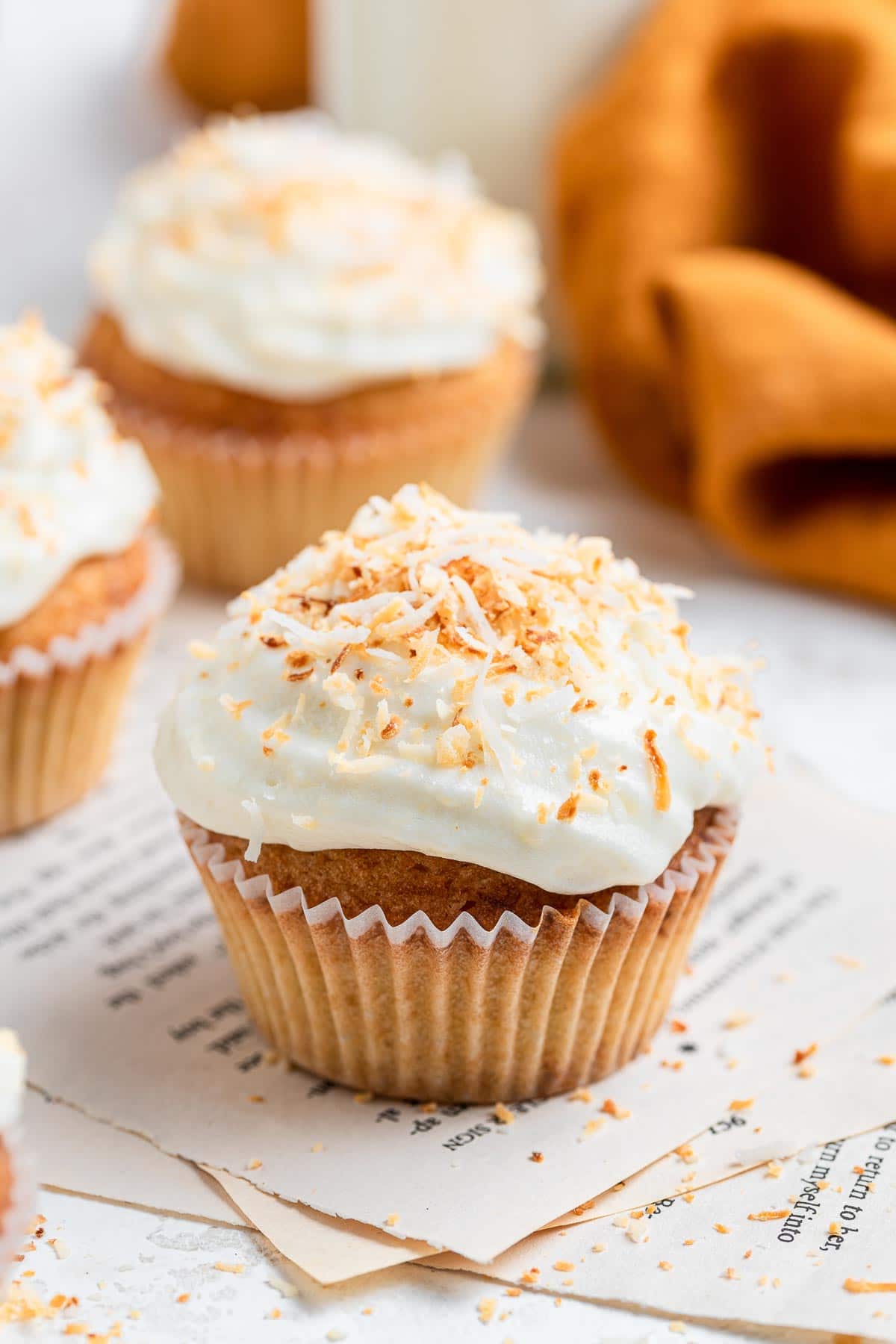 How to make coconut cupcakes: 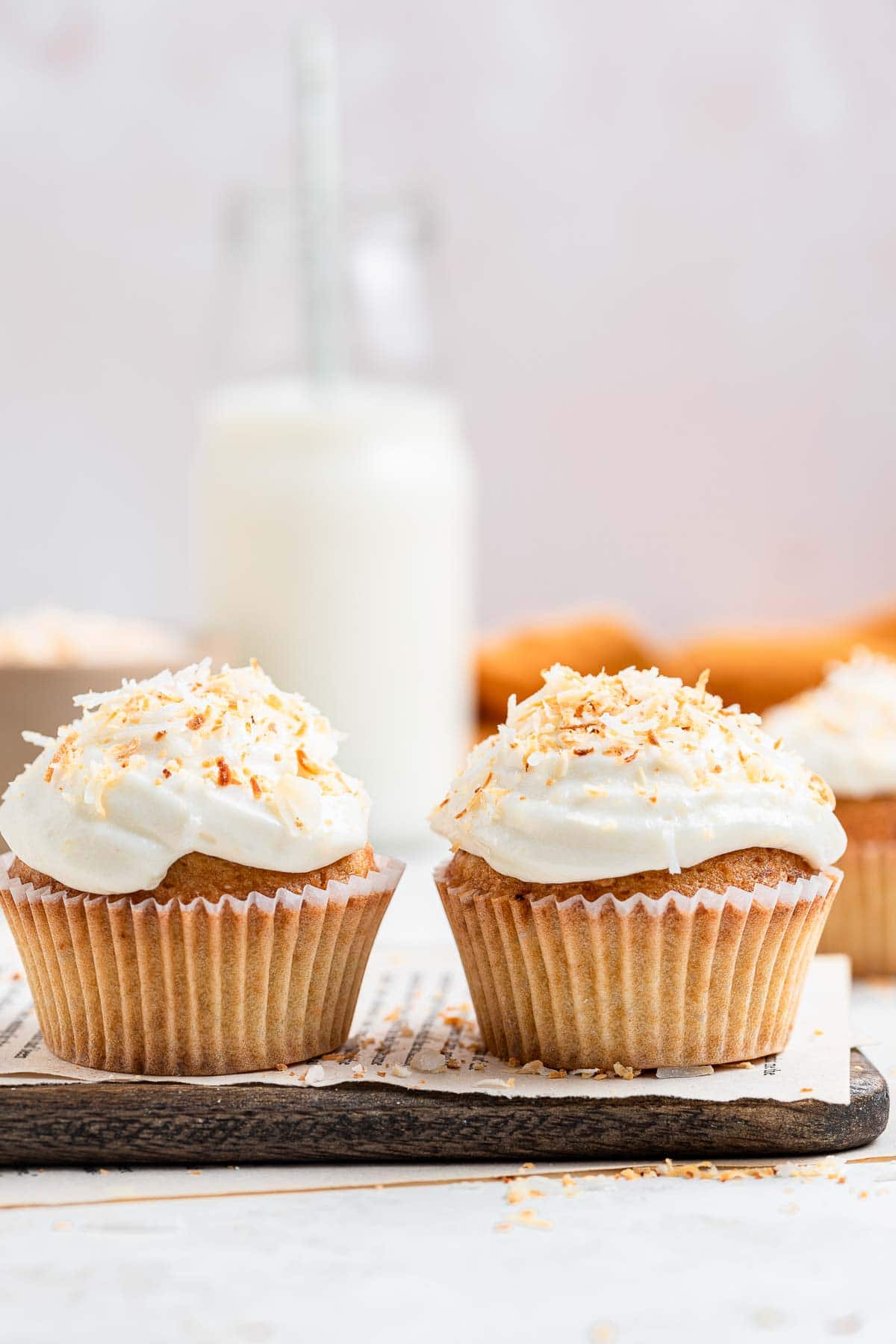 How to decorate coconut cupcakes:

You can absolutely pipe this coconut cream cheese frosting on top and sprinkle coconut flakes on top. However, this frosting is so rich, that I think it looks lovely spread on top with a butter knife and barely dripping down the sides.

Can you freeze coconut cupcakes?

You can make the cupcakes ahead of time and freeze in an airtight container for up to 2 months. Move them to the fridge overnight before you want to serve them, and leave them out at room temperature for a few hours before frosting them. You can also make the coconut cream cheese frosting ahead of time, scrape into a plastic bag, and freeze for two months. Defrost it overnight in the fridge, re-whip it with an electric mixer and frost the cupcakes with it. Do not freeze already frosted cupcakes--freeze them separately.

*Oil: For these coconut cupcakes, you can use a neutral, flavorless oil, such as canola, vegetable or grapeseed. Or, you can also use virgin coconut oil, for extra coconut flavor. If you use coconut oil, be sure to melt it in the microwave.
Canned Coconut Milk: The best canned coconut milk to use is regular, not light. Before opening the can, shake it very well to distribute the fat before measuring two tablespoons of coconut milk for the cupcakes and one tablespoon for the frosting.
**Coconut Extract: If you don't have coconut extract, just use almond extract in its place.
Sweetened Coconut Flakes. Sweet coconut flakes give the best flavor, but you can use desiccated (unsweetened) coconut flakes, as well.