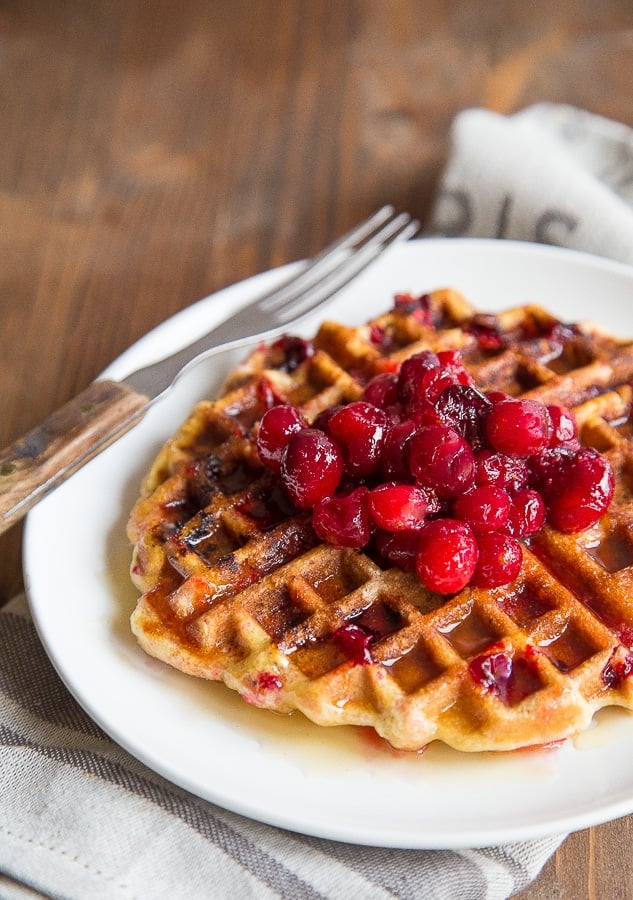 Cranberry cornmeal waffles (a small batch of waffles). The best way to use up leftover cranberry sauce!

I’ve been reading cookbooks like novels for years. Since before I realized I wanted to work in the food world. Since before I was on the brink of dropping out of grad school to attend cooking school. (I didn’t. I should have).

Before I even moved out of my parents house, my Mom and I would sit on the couch each night after supper and pour through the latest food magazines and cookbooks. It’s always been one of my favorite pastimes. We still do it when I go home to visit. In fact, as you read this, I’m home in Texas for Thanksgiving…most likely reading food magazines on the couch with my mama.

I’ve pick up tips and tricks from all of these cookbooks and food magazines along the way, and I store them in my brain vault. I can’t tell you the name of the movie I saw last week, or even remember something you told me yesterday (I’m the best secret keeper ever!), but I can remember a trick I learned to make extra crispy waffles from Pam Anderson. No, not that Pam Anderson. THIS Pam Anderson. The superior version of Pam Anderson.

Pam’s trick is to separate the eggs, whip the whites, and then fold the whites back in at the end. The light, airy nature of egg whites make for airy, crispy waffles. Pam A. knows her waffles. She knows her stuff in the kitchen in general, but her waffle trick really stuck with me.

This is a small batch of cranberry cornmeal waffles, so we’re only using one egg. You can surely beat and separate one egg. I believe in you! If not, just whisk the whole egg in, the waffles will still be amazing. Not the absolute crispiest they can be, but amazing.

The cider syrup was a bit of an after-thought. I bought a giant jug of fresh apple cider for mixing with Bourbon in the evenings. I haven’t been drinking much since August (thanks to a sugar detox), and it was just sitting in my fridge. When I reduced some down for my apple cider caramels, a light bulb went off in my head. Apple cider syrup is a great substitute for maple syrup, and can we call it sugar-free? Or at least naturally-sweetened? We can! And then, we can file it in the kid-friendly section, since we’re always looking for naturally-sweetened recipes for kids!

P.S. Please come back and tell me that you agree with me:  apple cider syrup is even better than maple syrup. Scandalous, I know! But true. So true.

For the small-batch cranberry sauce:

For the cider syrup: