Jump to Recipe
Crepes for two are such a perfect breakfast or dessert for two that is easy and simple to make! 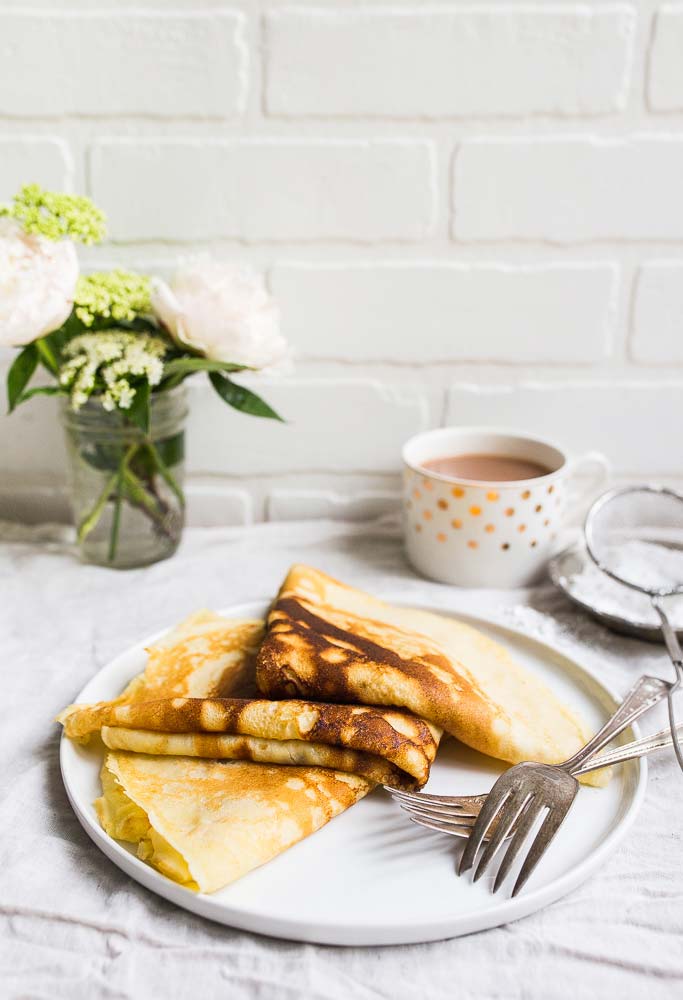 This isn’t particularly flattering about me, but I have to confess: I used to live near a crêperie and never ordered crêpes!

I lived near Crepeville for almost a decade, went there often during farmer’s market breakfast dates (yes, those are a thing in California), but I always ordered bagels. But let me defend myself: the bagel came smeared (schmeared?) thick with cream cheese, a pile of artichoke hearts, and niçoise olives. It was a salty breakfast lover’s dream, which is me–I like salt in the morning, not sweet. I save all of my sweet cravings for dessert after dinner.

There’s no world where I would turn down food with both olives and artichokes. So, I happily ordered my salty bagel, my friends and boyfriend du jour ordered crêpes, and life was good. Yes, I eyed my friends’ crepes, especially when Nutella was involved, but I resisted, nonetheless. 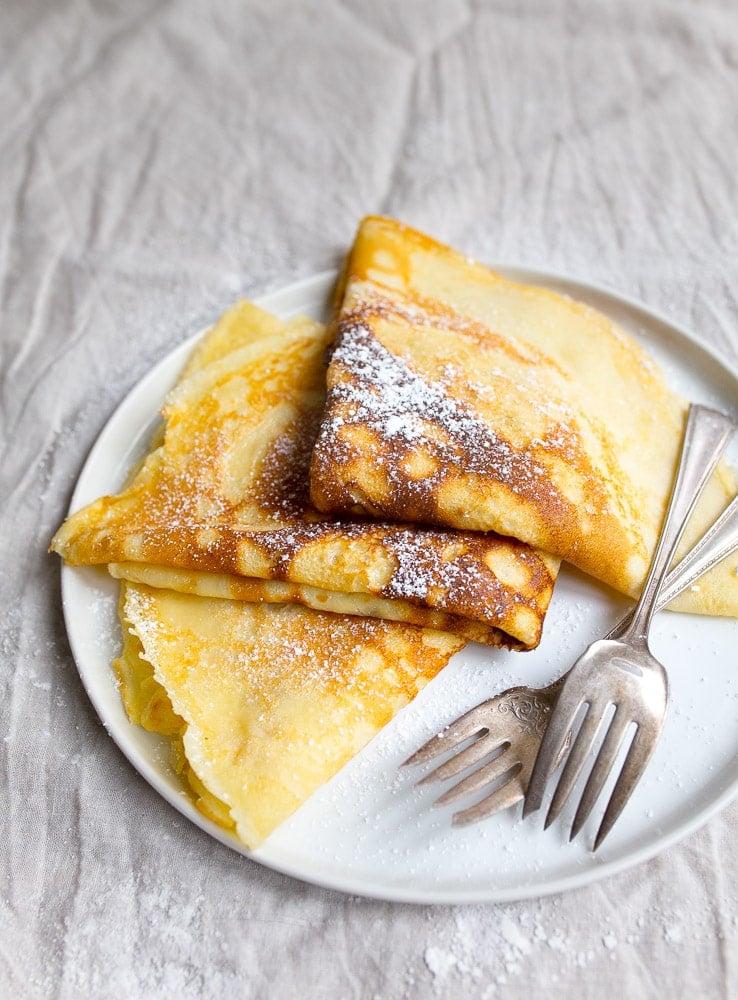 I vaguely remember an early date with my then-boyfriend-now-husband (in which he told me was dating someone, and I sat there silently in my head saying OMG THEN WHY ARE WE HERE? WHAT ARE WE DOING? IS THIS A FRIENDSHIP? WHY ARE YOU SO GOOD LOOKING?), and he ordered crêpes.

He offered me a bite (I think it was a strawberry and chocolate crepe), and I can’t remember if I said yes.

But I do remember he was wearing a flannel shirt. Basically, I remember every detail of the date, except whether or not I had a bite of his crêpe. So, I can’t honestly say if this is the first time I had a crêpe or not. It was definitely the first time I made them.l

Making crepes for two from scratch:

I ordered myself a pretty crêpe pan in one of my Francophile fits (every 6 weeks or so), and have been wanting to make crepes for two. 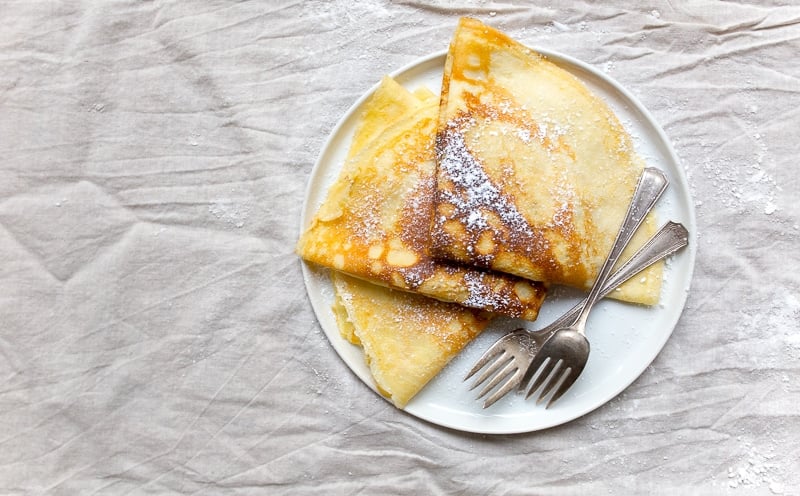 I thought they would be hard, but they were so easy. Everything comes together in the blender. Don’t miss the how-to video at the top of this post that goes over exactly how to make crepes for two. Here’s the blender I use.

I thought they would be dry and need a cream sauce on top, but they don’t. Crêpes are just simply perfect AS-IS.

How to make crepes:

I had lots of misconceptions about crepes, but they were all wrong: they’re not bread-y or egg-y. They just are light, fluffy and creamy at the same time. They’re crêpes for two, and you’ve got to make them for yourself!

It’s hard to describe, but if I had to, I’d say cooked custard. Creamy in your mouth, even though they appear dry like bread. In a way, crepes are magical like that.

And as someone who is overly sensitive to egg-y flavors, I can assure you: these have absolutely none.

The best way to make crepes also happens to be the easiest way: completely in the blender! It feels counterintuitive to make batters in the blender because we’re often told not to mix flour too much, lest the gluten develop. But when it comes to crepes, they contain such a small amount of flour, that’s we’re fine! We’re basically just making a custard in the blender that we’re cooking in small sheets.

You can take these in a savory direction, or you can go sweet. When I make these savory crepes, I roll them up with diced ham and grated Gruyere cheese. I served them to my parents this way for the first time, and they flipped for them!

For the savory version, decrease the sugar from 1 tablespoon to 1 teaspoon, and double the amount of salt to 1/4 teaspoon. The reason we’re not omitting all of the sugar is because it helps with the browning process in the pan! The brown bubbles that form as the crepes cook are largely a result of the sugars caramelizing and cooking.

I make these sweet crepes most often by rolling them up with fruit and chocolate or caramel sauce. A high-quality delicious homemade jam is great spread on a crepe, too!

However, you can stack them up in many layers to form a cake! Stuff caramel and whipped cream between each crepe layer, and you’ll end up with a beautiful, delicious layered dessert! This just might be my birthday cake of choice this year!

The recipe makes just 3 large crepes for two, because my site is for small-batch recipes. You might have already known that, but I just want to point it out before you continue. It’s the perfect amount for romantic breakfast in bed, or for a quick dessert for two after dinner.

I haven’t tried doubling the recipe myself, but if you do and it works, please let us all know in the comment section below. I would love to hear from you!

And while the old adage goes that the first crêpe is for the trash can, you obviously don’t want to do that because then you would only have 2 crêpes left. (Woe, the small batch lifestyle).

To make sure that first crêpe isn’t a total waste, let the pan really pre-heat (longer than you normally would, give it plenty of butter, and don’t be in a rush to flip it. It will release itself from the pan when it’s cooked. It will if you believe! Also, watch the how-to video to get an idea of what the butter should sound like in the pan before it’s time to add the batter and start cooking.

Oh, and THIS is the exact crepe pan I use. I also have a recipe for Dulce de Leche crepes here on my site, but it’s a totally different method. That recipe comes from someone’s cookbook, and is for Swedish style crepes. My recipe here is for French crepes, also known as the best crepes.