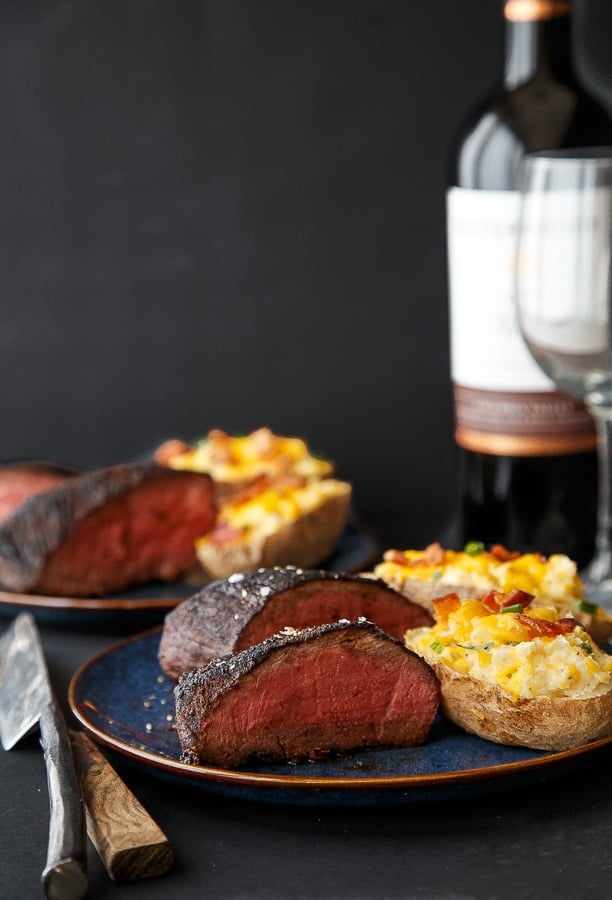 We’re still rolling along here with our 30 days of chocolate theme, but this time, I put chocolate in your dinner! This was another fabulous suggestion by a reader. Thanks, Krista!

I’ve been known to add ground coffee to my steak rubs, but I had not ventured to try cocoa powder. I combined the cocoa powder with smoked paprika to oomph it’s smokiness. The steaks don’t taste like chocolate, per say, but they do have a rich crust that has the earthy taste of cocoa powder. The cocoa powder helps the steaks get a nice dark char on the outside, too. For this reason, we’re going to sear them on the stove and then finish them in the oven to your desired temperature. Finishing steaks in the oven takes the guess-work out of it for me. I use my meat thermometer, and take them out at 140-degrees. Next, I wrap them in foil to rest, and then serve the perfect medium-rare steak. A perfect home-cooked steak is a thing of beauty. 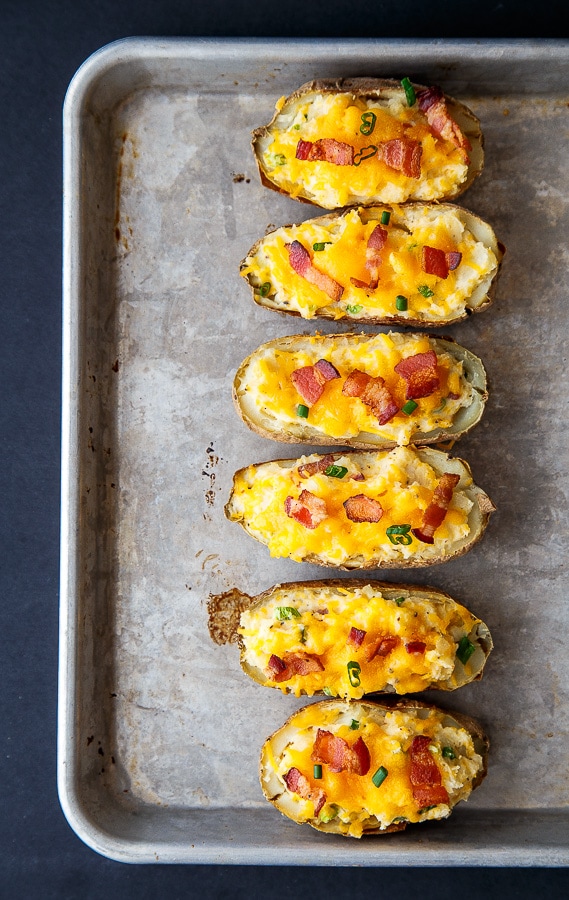 Another thing of beauty? A side dish of carbs. Maybe it’s all the game-day appetizers I’ve been spying on Pinterest lately, but I couldn’t get potato skins out of my mind the other day. I wanted them for breakfast. So, I made a few extra slices of bacon that morning and saved them for these twice-baked potatoes.

I went the extra mile with these potatoes and used real sour cream. I’m not sure if you’ve jumped on the Greek yogurt bandwagon like me, but it has pretty much replaced sour cream in my life. However, I think it’s time to go back to the way things were: sour cream for life. I forgot the richness of sour cream. My tongue was temporarily muted by the tanginess of Greek yogurt. Please take me back, sour cream, and I’ll never leave you again.

I’m not saying your boyfriend called me to tell you to make this for his Valentine’s Day dinner, but if he did, I would totally back him up. And boys, too:  your woman wants a steak with a side of non-judgement carbs. Trust me.

For the twice-baked potatoes:

For the cocoa rubbed steaks:

Let the steaks rest at room temperature before searing to allow for more even cooking.