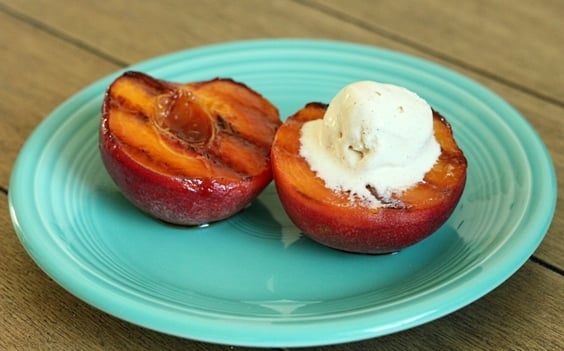 Most of the time, our first venture into cooking involves following a recipe.  Sometimes it’s our mother’s recipe, sometimes it's from a cookbook, or other times we’re simply reading the back of a box.

I remember the first recipe that called me into the kitchen.  It was a recipe for minestrone soup.  It called for almost half a jar of dried rosemary.  As I stirred, it floated to the top and reminded me of toenail clippings.  To this day, dried rosemary is dead to me.  The soup was bland as army food and it made enough to feed one too.  I lived alone, and I ate my way through that whole pot.

For a long time, I followed recipes to a T.  It never occurred to me to branch out.  If that Italian beauty on the Food Network said it was delicious, I made it exactly how she made it.  It wasn’t until a few years later that I had the urge to come up with something on my own.

My first ‘no recipe cooking’ endeavor was grilled peaches.  It was one of those first few nights in California where I attended a cookout with some new friends.  Everyone took turns grilling their contribution to the meal, and soon, all that was left was dessert.  Thinking back, I’m sure none of those Californians expected dessert after such a heavy meal, but I came here ready to preach the Southern gospel: ‘no meal is complete without dessert.’  I stirred together a sauce to brush over the peaches.  I don’t think it was my own epiphany—I had seen someone else grill peaches before (most likely on TV), but I couldn’t recall the exact ingredients.  I used what I had on hand and came up with a cinnamon, brown sugar and Frangelico sauce.  I dipped the peaches in it, placed them on the grill cut-side down, flipped them and brushed more of the sauce on top.  I dropped them onto everyone’s potato salad-stained paper plates and watched their faces light up with the first bite of warm peach.  Feeling like a food genius, I vowed to stop using recipes.

I’ve had my fair share of cooking flops along the way (you can not make béchamel with buttermilk), but one thing that fuels me to keep trying is these grilled peaches.  If my first attempt tastes this good, then there’s gotta be more delicious success on the way.

Premium quality cinnamon is paramount for this recipe.  Like always, I recommend Spices, Inc.  I used spicy Saigon cinnamon, but sweeter Ceylon would be a great choice as well.

For the cinnamon ice cream:

*Note: If you don’t want to go through the trouble of making cinnamon ice cream, add ½ teaspoon cinnamon to your brown sugar sauce instead. It’s just as delicious.