The most crowd-pleasing appetizer that has ever existed is here. Ham and cheese puff pastry squares are so elegant and impressive, yet they only take minutes to make! You probably already keep all 5 ingredients on-hand, and you really can't mess this recipe up. It's a hearty appetizer with the delicious combination that everyone loves: ham and cheese! 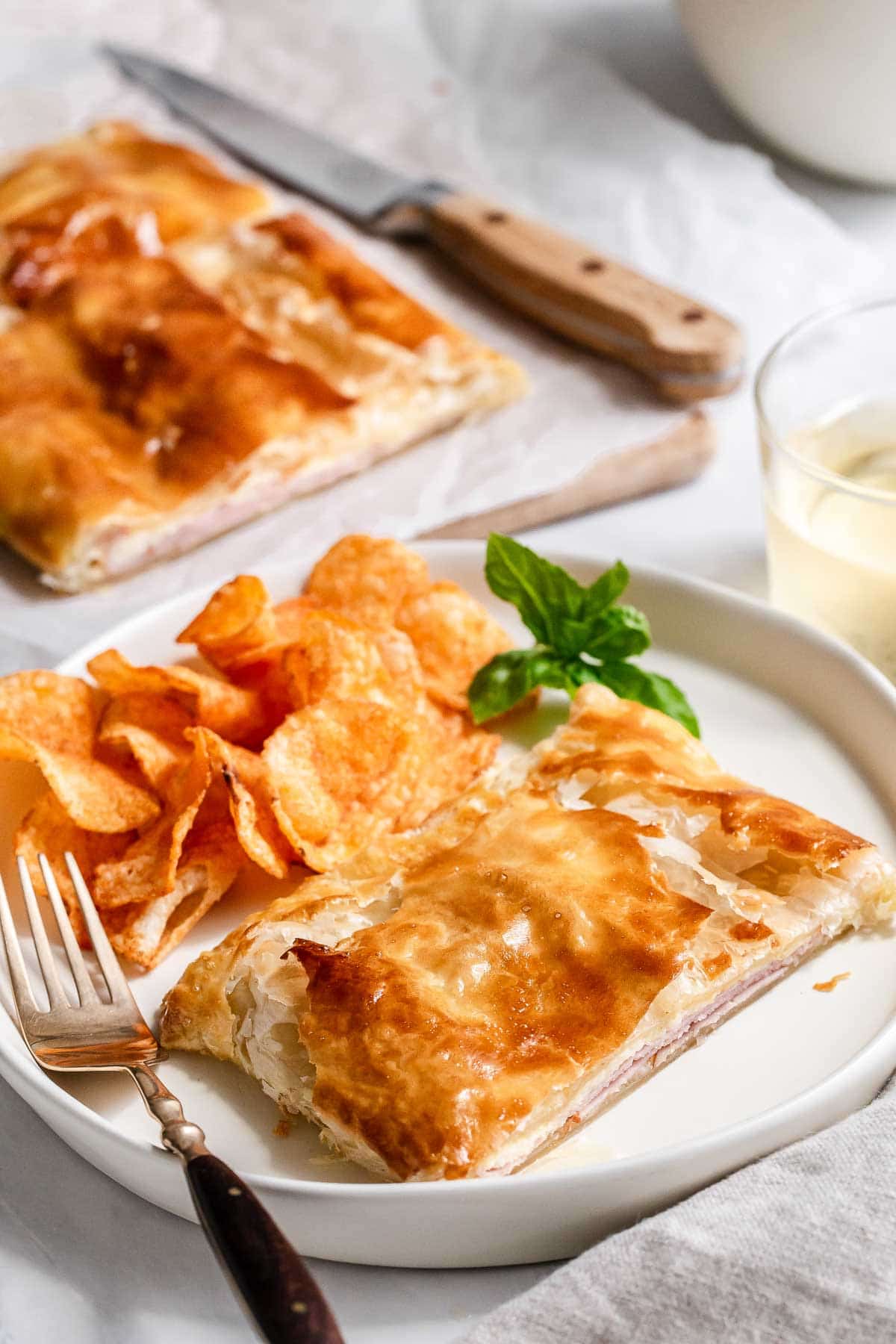 The amount of puff pastry I've consumed over the past few weeks might be alarming to some, (like my doctor) but not to others (like the French). I'm just saying, if you pass me on the street and want the secret to my glowing skin: butter.

I had to test my 15-minute puff pastry recipe a few times, and then I tested dessert recipes with it. Desserts like sweet ones with apples, and simple things like palmier cookies. Oh, and let's not forget that 'dessert,' where I brushed dough with even more butter and showered it with cinnamon and sugar. I was just showing off for that one. After the last batch of puff pastry was gone, I had the idea to make you a quick, savory appetizer for Thanksgiving. So, I made another batch of dough. Oh, bless these struggling arteries.

One batch of this ham and cheese puff pastry makes 4 reasonably-sized ham and cheese sandwiches, which we ate with Caesar salad for dinner one night. (Salad negates butter, if you didn't know). As an appetizer, you can get 8 bites out of it. You can scale up from there, according to your party plans. It's just so dang simple. Grab some sliced ham (thin, but not shaved) and your favorite cheese (I like an aged white cheddar), brush on a little mustard, crimp, and bake.

Sweet and savory things to do with puff pastry:

How to make ham and cheese puff pastry

It's really true, you can make this in minutes. Just ensure the puff pastry has been out of the freezer for a few minutes to soften first. Grab fancy mustard from the fridge (any kind is fine, more details below), a few slices of ham, and an egg yolk for brushing on top to give it the rich golden color.

To serve this as an appetizer:

Once cool, you can use a very sharp knife to cut this into 8 appetizer-sized portions. To cut evenly, cut into four squares, and then slice at an angle to make 8 triangle shapes. You can scale this recipe up for a larger party, of course.

To serve this as a meal:

I like to cut the square into 4 smaller squares and serve this with a salad to make a complete meal. My beetroot and feta salad is especially great with this! If it's summer, try my nectarine salad on the side instead. 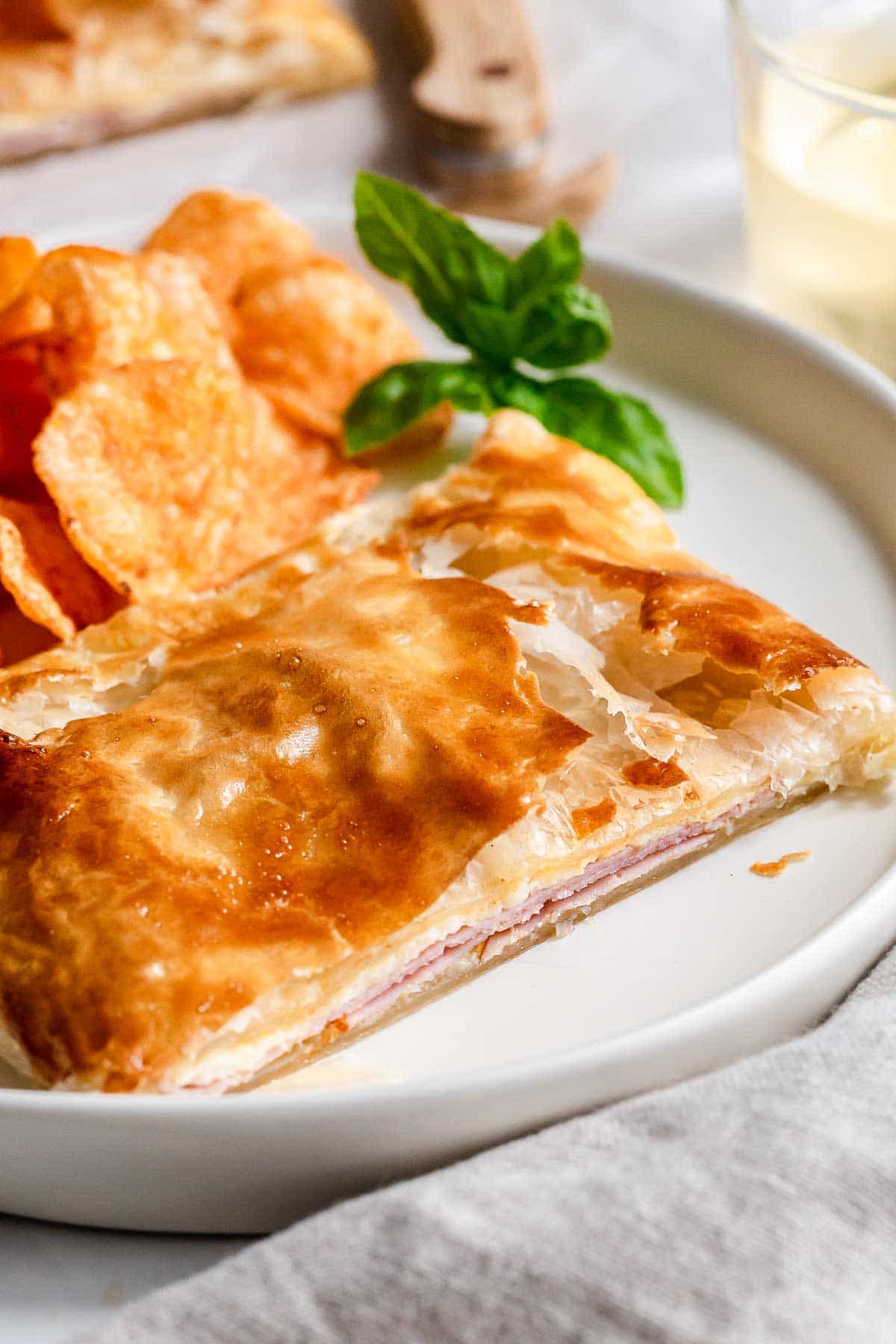 Other ham and cheese recipes you will love:

Puff Pastry: This can be from the box, or you can make my recipe for easy homemade puff pastry. If the puff pastry is frozen, let it rest on the counter for 15-20 minutes to defrost enough so that you can roll it without cracking. If you made my homemade recipe, let it chill in the fridge 1 hour, and then let it rest on the counter for 10 minutes before rolling.
Mustard: Fancy Dijon mustard, spicy brown mustard, coarse-grain mustard, or even bright yellow mustard are all great here.
Deli Ham Slices: You need six thin slices of ham, like the kind you put on sandwiches. You want thin slices, but not shaved ham.
Aged Cheese: An aged white cheddar is what I reach for most, but Gruyere, Gouda, and even Parmesan.
Egg Yolk: This gives the puff pastry a beautiful golden brown color that reminds me of perfect crust from a bakery.