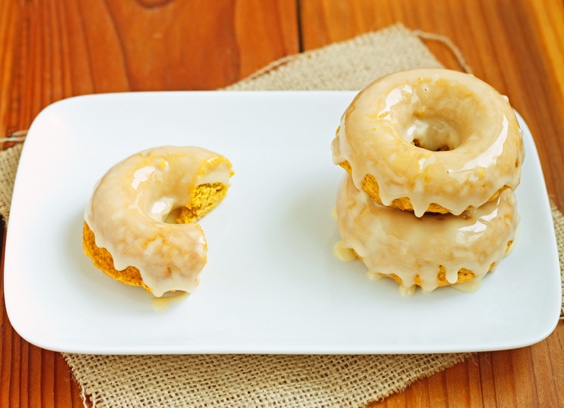 Do six donuts serve two people?  Are you the judge of that?  Surely you can't be the final authority.

I like to break my donut adventures into three parts.

The first part passes by quickly, so you better keep up:  I eat the first donut within the brief period of time that my body is awake but my brain has yet to tell my mouth how to form complete sentences.  If I must communicate with you in order to get at that donut, you will see frantic pointing in the direction of said donut, wide eyes glaring at you with eyebrows an impossible 6” above, and fierce toe tapping.  The kind of toe tapping that makes your shin muscle sore the next day.  Before I’m done stumbling around the kitchen and slamming a tea pot on the stove and crinkling every tea bag wrapper so loudly that the birds stop singing outside, the donut vanishes.

The second foray in my donut adventure is the donut I eat with tea.  I alternate bites with sips of hot tea so that each bite melts in my mouth.  In my mind, this is the first donut.  Then, come 10:30 or so, I forget what donut one and donut two tasted like.  I better check again.  But I don’t need a whole donut, not skinny ol’ me with a stomach the size of a pea.  Like a particularly adept surgeon, I slice off part of the donut arc and pop it in my mouth.  Lardon after sugary lardon, I’ve eaten a third donut.  Well, at least I didn’t scarf all three down at once like a man.

So yes, half a dozen donuts serves two people.

My donut pan is non-stick and is made by Wilton. Here's an Amazon link: http://www.amazon.com/Wilton-Nonstick-6-Cavity-Donut-Pan/dp/B004CYELOQ