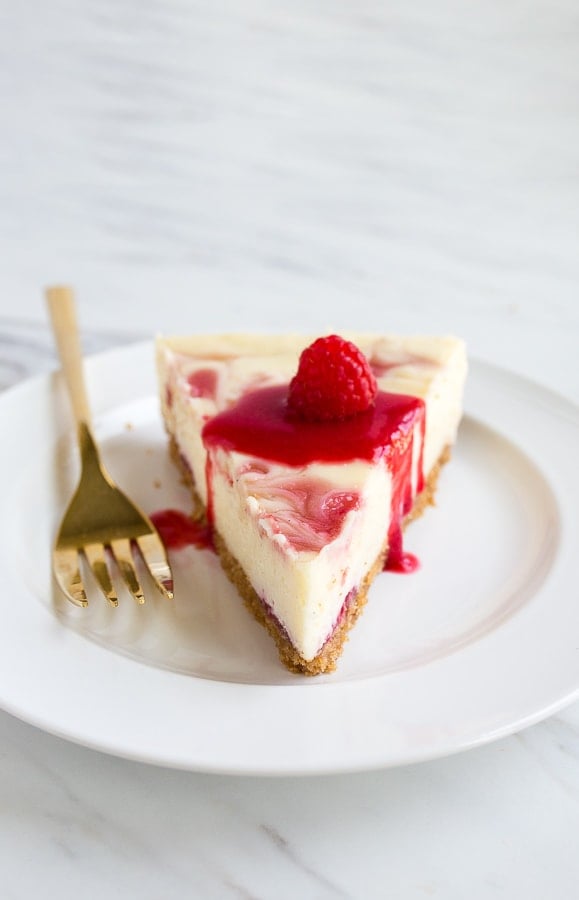 I’m not sure if it’s a blessing or a curse, but I never have extreme food cravings while pregnant. I’m definitely hungrier than normal and eat nearly constantly throughout the day, but I don’t wake up with pickle or ice cream cravings. Or, worse: pickle ice cream cravings.

However, I won’t lie–I saw dill pickle cotton candy at a local candy shop, and I was intrigued. And while I probably would have enjoyed it, my love of dill and vinegar precedes pregnancy. Anything delicious sounds good to me!

My first pregnancy occurred mostly in the winter, and I thoroughly enjoyed all the cozy comfort food of the fall and winter months. Plus, maternity clothes are so much more simple: I made it all the way through with just two pairs of maternity jeans and some long sleeve maternity shirts and sweaters. Being pregnant over the summer has meant a lot more ice cream and cold, creamy cheesecake! 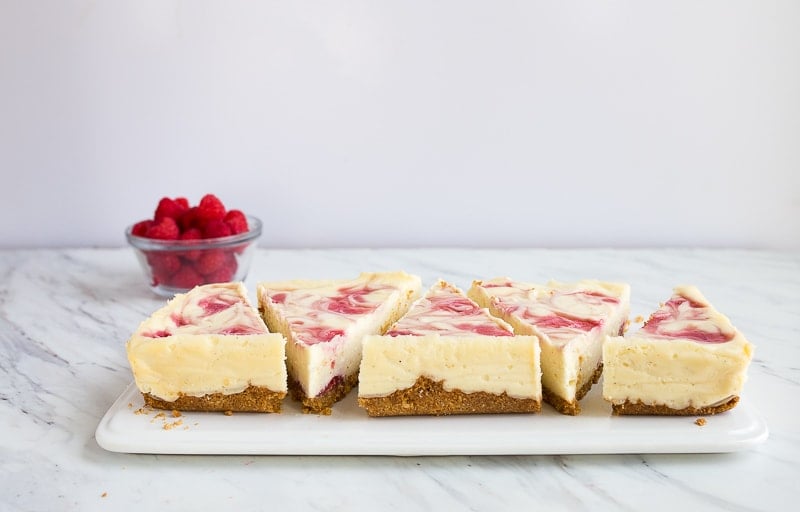 How to prevent cracks in cheesecake:

I’ve been making my loaf pan cheesecake for years, and you guys love this recipe! I have variations of it, including: lemon blueberry cheesecake, key lime pie in a loaf pan, and angel food cake in a loaf pan. And yes, I hear your plea for a chocolate version–it’s coming soon, I promise!

When I do book signings and book tours, I almost always bring cheesecake. My cheesecake recipe is perfection: it bakes up perfectly flat without bubbles or puffiness. What’s my secret for preventing cracks in cheesecake? I’m so glad you asked! 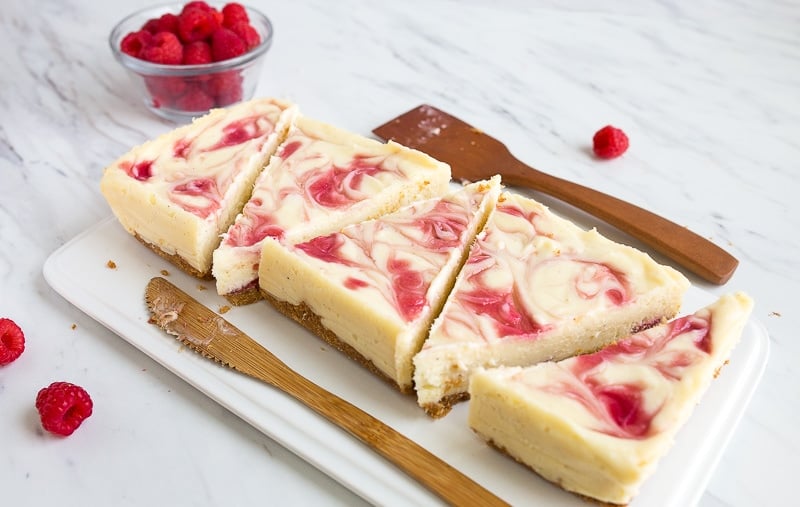 Is a water bath necessary for cheesecake?

I’ve only used a water bath (or bain-marie) one time  for a cheesecake recipe, and that cheesecake cracked. Plus, the water seeped under the springform pan and soaked my crust. To spend the time, energy, and ingredients making a cheesecake one time and have such an epic flop was enough for me.

I bake cheesecakes in standard size 9″ bread loaf pans. This is the one I use and love. I own three of them, and I use them often, especially for brownies for two.

These pans are aluminum, which is thin and conducts heat easily and evenly. Dark colored metal bakeware is one my all-time pet peeves in life. Dark colored pans are made of all different types of metals, which all conduct heat differently. Also, dark pans get hotter faster in the oven, all things to avoid when you want an even bake. 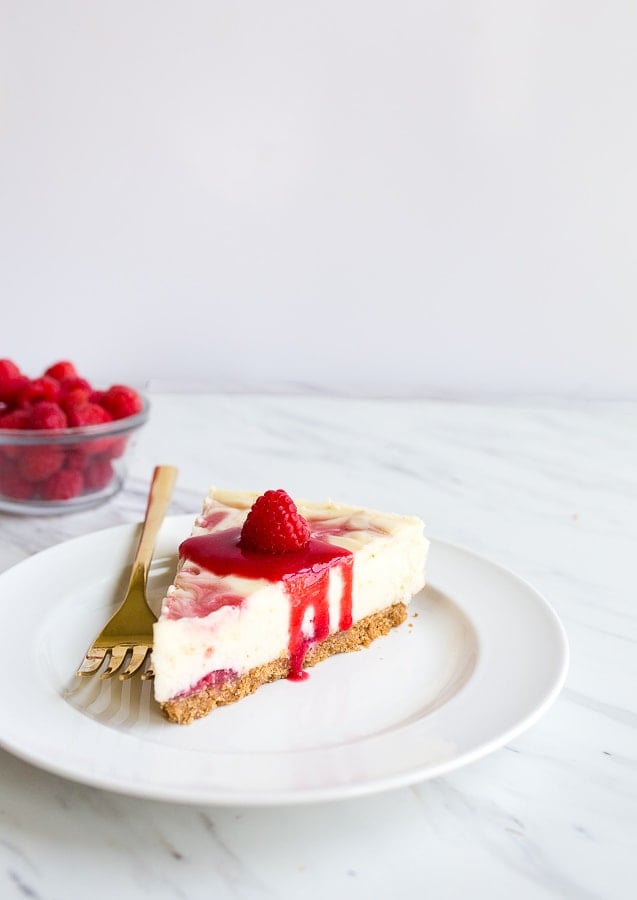 Okay, now that we are confident that will we will raspberry white chocolate cheesecake success, let’s talk about the crowning jewel on this dessert: the raspberry sauce for cheesecake!

This fresh raspberry sauce is bright, tangy and tastes exactly like a super ripe fresh raspberry. The sugar should be dissolved by the food processor. If the final sauce has some gritty sugar in it, let the mixture sit in the fridge for an hour and stir. The sugar will melt as it sits in the acidic fruit juices.

This is what she looks like, right out of the fridge after being chilled overnight. No cracks, no bumps, no lumps, even though we swirled in fresh raspberry sauce and dolloped raspberries on the crust.

It’s cheesecake perfection, and I hope you love it! My cheesecake recipe is made in a loaf pan and only makes 5 perfect slices, if you’re new to my small-batch desserts site.

For the raspberry sauce for cheesecake:

1. Preheat the oven to 325, and line a 9 x 5 x 3-inch loaf pan with parchment paper. It doesn't have to cover all sides--just the two longest sides.
2. In the bowl of a food processor, make the crust: combine the graham cracker sheets, melted butter and sugar. Pulse until combined and the mixture appears like wet sand.

3. Press the crust into the bottom of the loaf pan, and bake for 15 minutes. The edges of the crust will start to turn slightly golden brown. Remove from the oven and let cool. Turn the oven down to 300.

4. Next, make the raspberry sauce: add the granulated sugar to a mini food processor and pulse until powderey. Add 1/2 cup of raspberries and pulse again. Pour into a small bowl and chill until needed.

5. Then, add the chopped white chocolate to a double boiler (or a heat-safe bowl placed over a pan of simmering water). Melt the white chocolate while stirring frequently. I really don't recommend melting white chocolate in the microwave, but if you must, be sure to turn the power down to 50%. Stir after each 20-second pulse until smooth and creamy.

6. Next, beat together the cream cheese and sugar until light and fluffy. Beat in the egg, followed by the vanilla and melted white chocolate. Do not over-mix.

9. Dollop a few tablespoons of the raspberry puree on the surface, and swirl in with a toothpick or butter knife. Save the remaining sauce for serving.
10. Bake the cheesecake in the 300-degree oven for for 35-40 minutes, until the entire surface is set and not sticky. It will have a slightly golden yellow hue. A toothpick inserted should not come out with wet batter.
11. Let the cheesecake cool near the oven (drastic temperature changes cause cracks in cheesecake). Once fully cooled, move to the refrigerator for at least 4 hours.

12. Slice into 5 equal pieces, and serve with the additional fresh raspberry sauce and white chocolate shavings, if desired.