Small batch cinnamon rolls for weekend mornings. This cinnamon roll recipe makes just 1 pan of rolls, about 7 or 8 rolls. They're perfect for a small family. 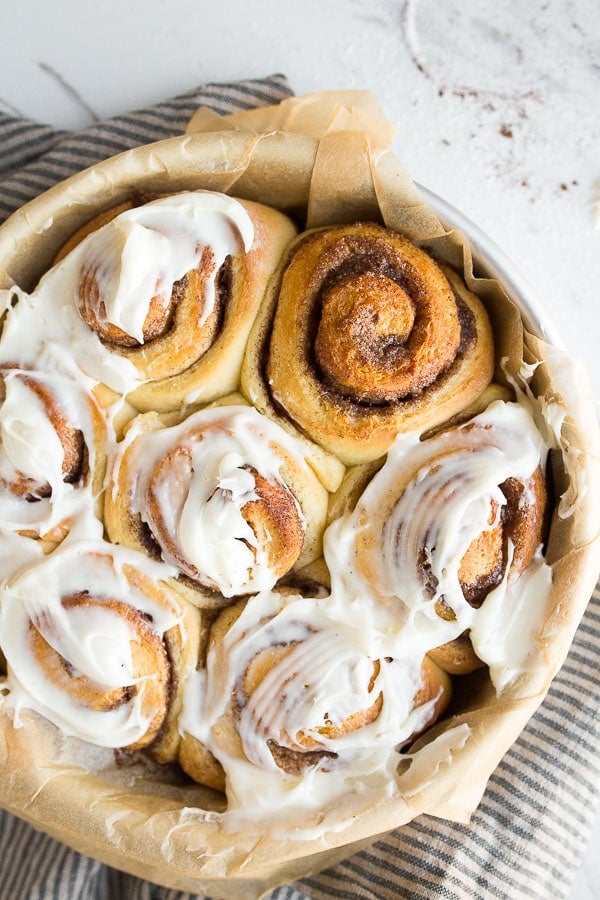 Each year, I like to share one regular-size recipe with you. Over the years, I've made you a pumpkin pie with coconut milk made in a regular 9" pie plate instead of a mini one. Last year, I shared a batch of my family's Czech kolaches that makes one dozen rolls. (Though, regular kolache recipes make dozens of rolls, so I feel like this is a still a small-batch recipe).

Anyway, this year, I polled on instagram which kind of recipe you would like to see. Christmas morning recipes slowly climbed to the top of the list. And truthfully, I've been thinking a lot about what I might serve this Christmas morning.

This is the first year that Camille really 'gets' Christmas. Last year, we had cranberry cornmeal waffles, and she fumbled her way through unwrapping gifts while asking 'why the wrapping paper, mom?'

But this year, she totally gets it. She sat on Santa's lap, told him 1298 things she wants for Christmas (all out of ear-shot of Mom, so it's a guessing game now), and she's reminding me dozens of times a day to buy carrots for Santa's reindeers. 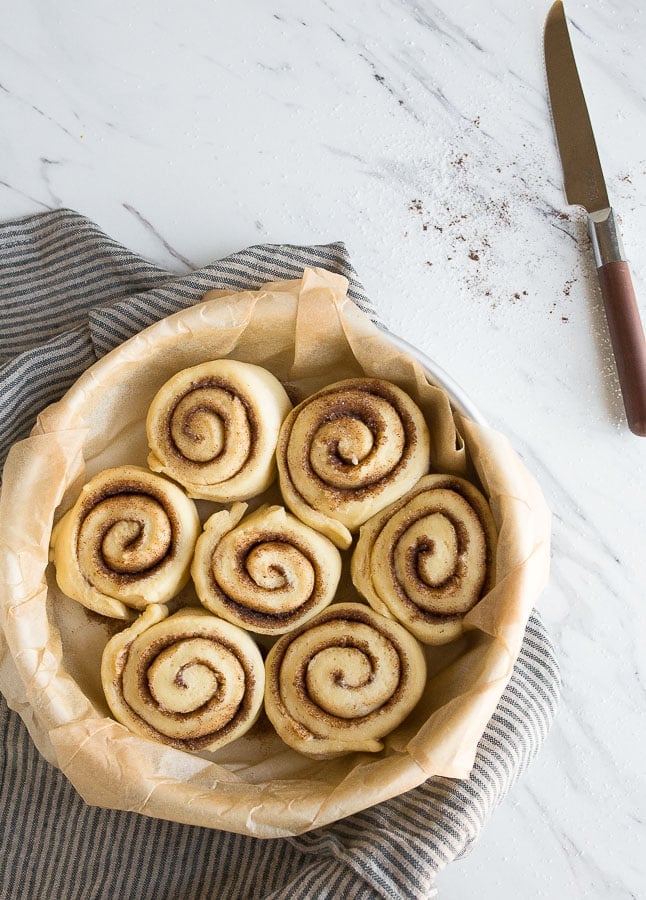 It's safe to say we're deep in Christmas spirit and thinking of ways to make each day special and joyful.

It's time to introduce Camille to the joys of a cinnamon roll slathered in cream cheese frosting. Sure, she's had donuts before, but a cinnamon roll is a whole different thing of beauty. She can unravel the roll, lick the frosting, and put sprinkles on top, too.

I have a quick cinnamon rolls for two recipe on this site, but they're made with baking soda instead of yeast to help you get them on your table in less than 45 minutes. Christmas morning warrants real cinnamon rolls, made with actual yeast.

I'm still going to take the easy route and make these overnight cinnamon rolls. Take advantage of being able to get your kids to bed slightly earlier than usual on Christmas Eve, and make a batch of cinnamon roll dough before bed. Spread the butter, cinnamon and allspice filling on top, roll it up, slice and arrange them in a round pan. Pop them in the fridge overnight to rise slowly. In the morning, pull them out of the fridge to do a final rise on the counter at room temperature. Preheat the oven, and bake just before the kids wake up.

You can even make the cream cheese frosting the night before and let it come to room temperature while the rolls rise before baking. 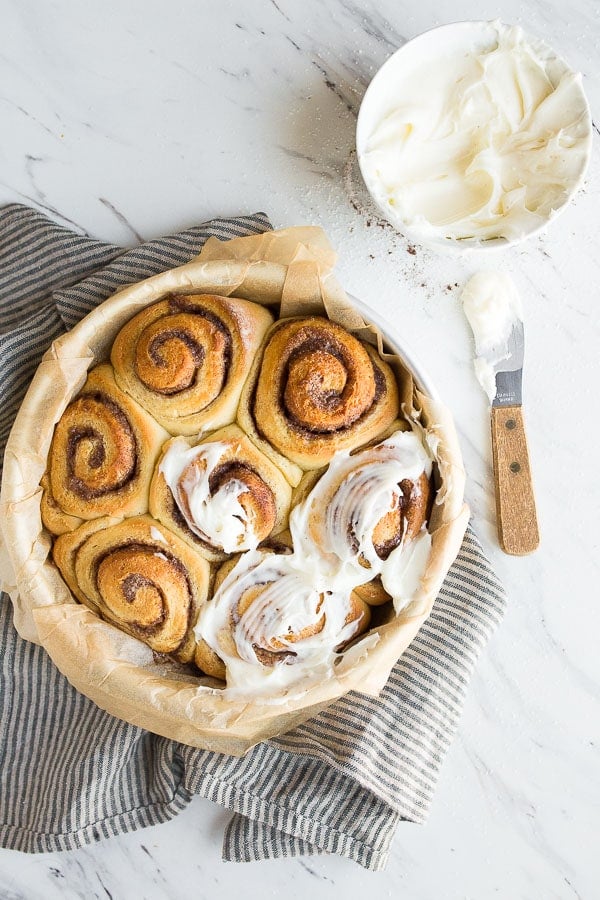 Why a long, slow rise is best for yeast doughs.

I've been watching quite a bit of Great British Bakeoff (every single episode, to be exact), and if I've learned anything it's that Paul Hollywood recommends a slow rise for yeast doughs. He claims the flavor is enhanced by a slow rise, and after one bite, I completely agree. When yeast rises slowly, the benefit is a richer flavor in the final result.

A slow rise in the fridge overnight is definitely the way to go with cinnamon rolls.

This small batch cinnamon roll recipe makes 7-8 rolls. I have 7 rolls here in the photos, because I became a little too obsessed with slicing off the ends to expose the perfect spiral. You will probably get 8 rolls out of this recipe. Don't be like me and cut off too much from the ends when you're slicing the roll.

I added a little allspice to the cinnamon and sugar mixture, because allspice is the aroma of Christmas in my mind. Camille added the snowflake sprinkles on top because her Frozen obsession hasn't wained since she saw the movie 3 months ago. 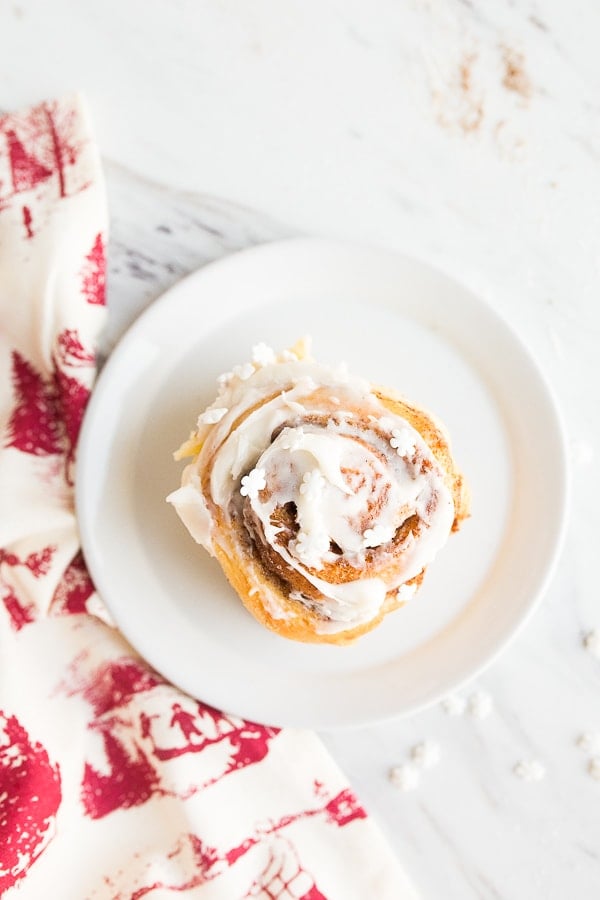 I'm still not sure if this is the only full-size recipe I'll share with you this year; I've got my eye on a Paul Hollywood recipe for German Stollen. But, I think you can use these small batch cinnamon rolls all year long. 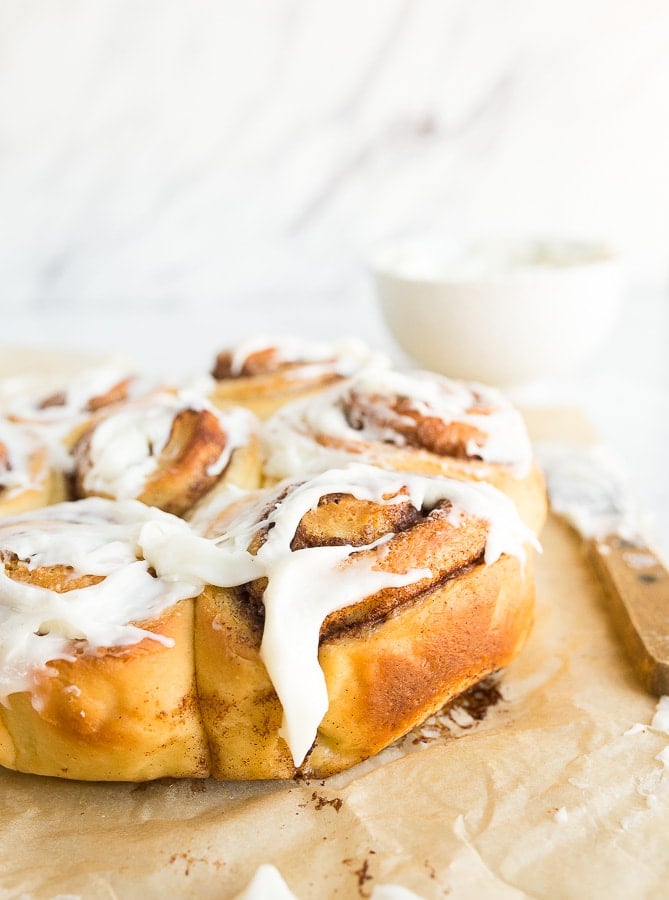