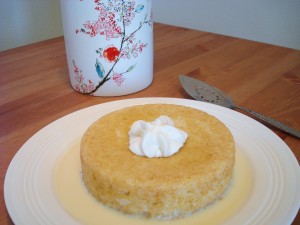 Almost every Tex-Mex restaurant has Tres Leches Cake on the dessert menu.  I believe Texans are so enamored of it because it contains sweetened condensed milk.  The Pioneer Woman likes to call it the nectar of the South.  I couldn’t agree more.  Tres Leches is a sponge cake drenched in a sweet, creamy sauce made of three milks.  It’s heavenly.  It’s a very strange cake in that it contains no oil or butter.  And I’ve even seen flour-less versions of it that use ground almonds instead.

Now, there are many variations of this cake to be had.  I’ve had delicious versions of this cake that contained Mexican vanilla.  While tasty, I feel that it competes with the milk flavor.  But if vanilla is your thing, by all means, stir some in!  I’ve also had versions that contained cinnamon in the batter.  I left it out of this recipe to stay true to the original, but I wouldn’t mind a bit if you added ¼ teaspoon of cinnamon.  Most folks prefer this cake frosted with whipped cream, but I’m not a big fan of whipped cream in general so I serve it on the side.  And finally, to many people, it’s not Tres Leches unless there’s a neon red Maraschino cherry on top.  Feel free to garnish.

For the milk sauce: