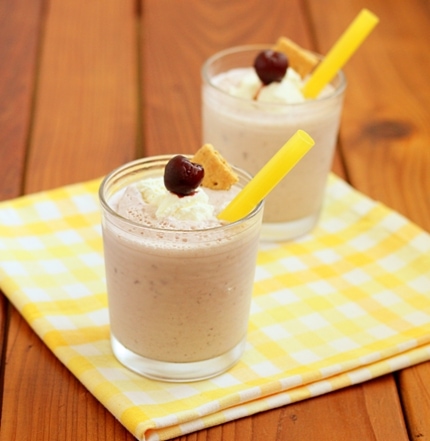 Let’s face it:  a milkshake is just a way to eat double the amount of ice cream in half the time.  And I’m okay with that.  Now that it’s summer (also known as the time of year I try to avoid using my propane oven as much as possible—life in the country ain’t so grand), we will be drinking our desserts.

A few Sundays ago, when we had a million things to do before sundown, we paused to pick 10 pounds of cherries from our tree.  It was time well-spent, as we have been gorging on double vanilla cherry jam (thanks for the relatively low-sugar recipe, Amanda) and cool rice salad with cherry vinaigrette from Heidi’s latest book.  I pitted the rest of the cherries, stashed them in the freezer, and dreamed of eating them in the cold winter months.  Well, I’m sad to say that the cherries are already gone.  We’ve been enjoying cherry lemonade and these milkshakes with crunchy chunks of graham crackers too much it seems.  It’s going to be a long year ’til cherry season rolls around again.

The tastiness of this recipe depends very much on the quality of ingredients you use.  This includes ice cream made from ingredients you can pronounce and spices.  The lovely people at Spices, Inc. who happen to have Texan roots (yeee-haw!), sent me a box of their spices to test with my recipes.  I feel like I have crossed over into another world and I never want to leave—grocery store spices and extracts pale in comparison to their products.  After one whiff of their ceylon cinnamon, grocery store cinnamon smells like cardboard.  Their almond extract has a subtly that is lacking in the alcohol-heavy versions from the grocery store.  I’m a convert.  You will be, too.