Pork schnitzel recipe for two. A comprehensive guide on how to fry golden brown delicious food, plus an explanation on why proper frying technique means the food doesn't soak up oil! This recipe is FULL of tips for frying, and you'll become well-equipped to go out and fry anything you want! 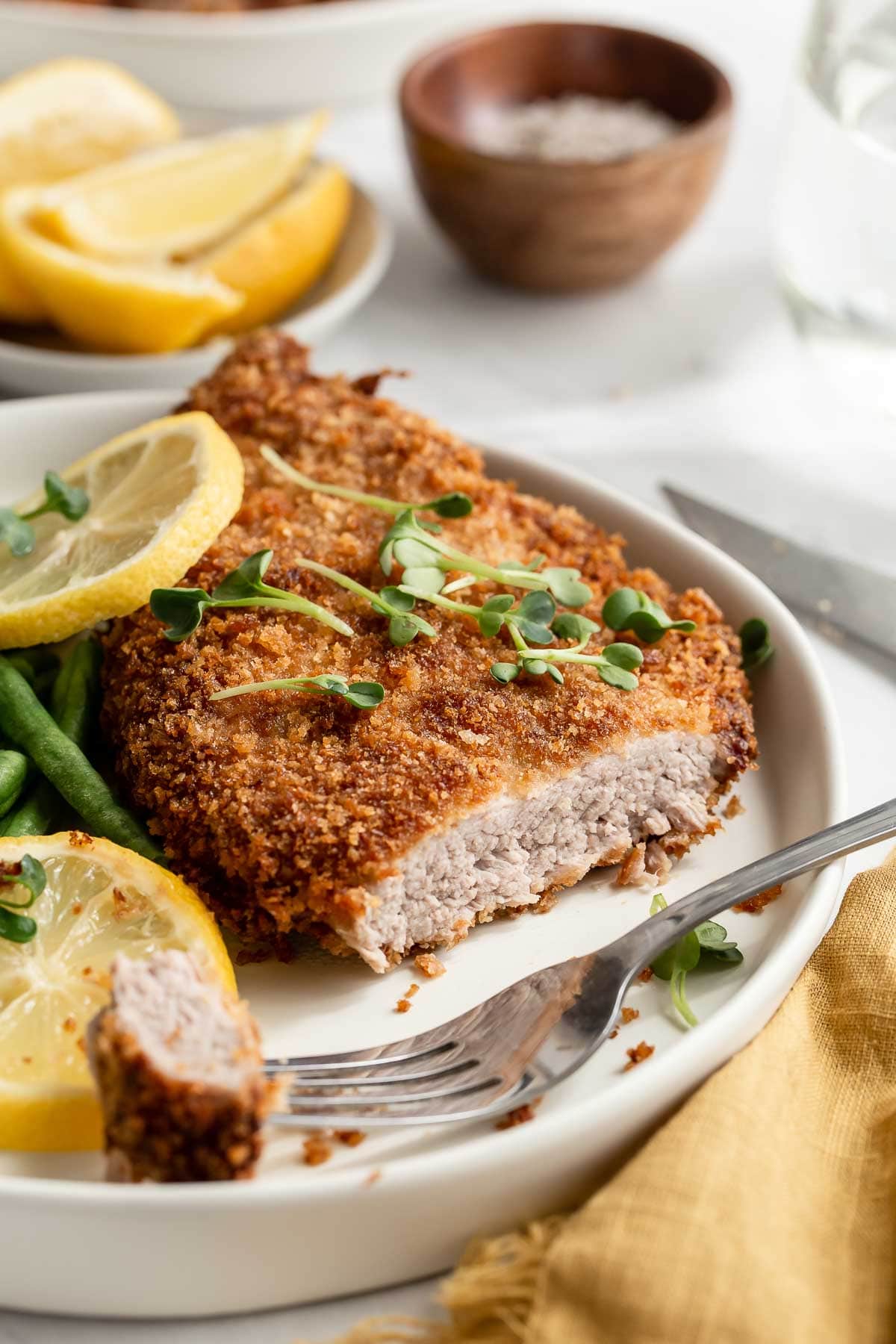 I'm considering changing the name of this blog. Something along the lines of Desserts for two...PLUS FRIED THINGS! I love to fry. I was born to fry! I believe I can fry! I believe you can fry, too! If it scares you, can we chat?

I understand frying for a crowd can be intimidating. I consider myself an expert fry mama (as opposed to fry daddy...), but even I wouldn't take on chicken fingers for a crowd. I would opt to bake them instead, like I do for my baked breaded chicken strips. Those are even freezer-friendly, friends!

Anyway, a few months ago, I had a dinner party where I fried pork chops for 8. That is precisely how I learned the lesson that large batch frying isn't fun for anyone, least of all the fry mama.  So, save frying for small batch stuff and date nights, ok?

Another common fear of frying is calories. As a lover of food, this is something I just don't understand on a deep personal level. But, I will indulge you anyway. I'm nit-picky about measuring oil when I fry. I know that my 1-quart enamel-coated cast iron pot needs exactly 2 cups of oil to fry something small. After I fry, I strain the oil back into the cup for re-use. Hardly any oil is missing. If you're frying properly, your food is not soaking up the oil. We can cover this more in a bit.

When to reuse fry oil:

I wanted to mention that I re-use my oil for frying about 4-5 times, because with each fry session, the crust gets a little browner. If I know it's the last use of the oil, I will fry fish for a deeply golden crust. Anytime you fry fish, the oil is pretty much a one-time use. Don't fry cod followed by funnel cakes. I'm speaking from experience here.

Personally, I fry in peanut oil and canola oil. In my opinion, the reason restaurant fried food is such a stark contrast of disgustingness is the type of oil they use (usually of dubious origin) and how frequently the oil is replaced with fresh oil (approximately never, according to a restaurant friend).

So why is my food absorbing such little oil, yet it has this beautiful, brown crust that shatters at the touch of a fork? I'm so glad you asked!

It has to do with temperature. Any recipe worth its weight will call for a certain temperature of oil. Um, please don't ignore it. It's not a suggestion. But also, my lovely future fry mamas and papas:  test the oil once it is at the recommended temperature. Drop a small piece of batter in the oil--it should float and sizzle immediately. If not, it's not hot enough.

When food swims in not-hot-enough oil, it absorbs the oil like a spa wrap treatment. Sometimes in the winter, my skin is so dry that I envy improperly fried food with that greasy coating. But honestly, after making my sweet potato fries recipe, 2 tablespoons of oil was missing. Divide that between two servings (let's pretend I shared those sweet potato fries and didn't lie to my husband about burning the first batch), it's an extra 100-150 calories from the oil.

I learned these great lessons of fried foods from America's Test Kitchen, and most specifically with their famous easy French Fries recipe. I didn't believe them that the fries wouldn't absorb oil during cooking. I measured, fried, and re-measured. Sure enough, they were right. (ATK is always right. Just learn that lesson right now).

I consider it dangerous knowledge that homemade fried food isn't really all that oily and chock full 'o calories. You are going to want to fry all the things! And that's okay.

So, let's recap, fried friends: Fry in small batches, measure your oil, ensure its temperature before adding the food, and don't re-use your oil too many times. 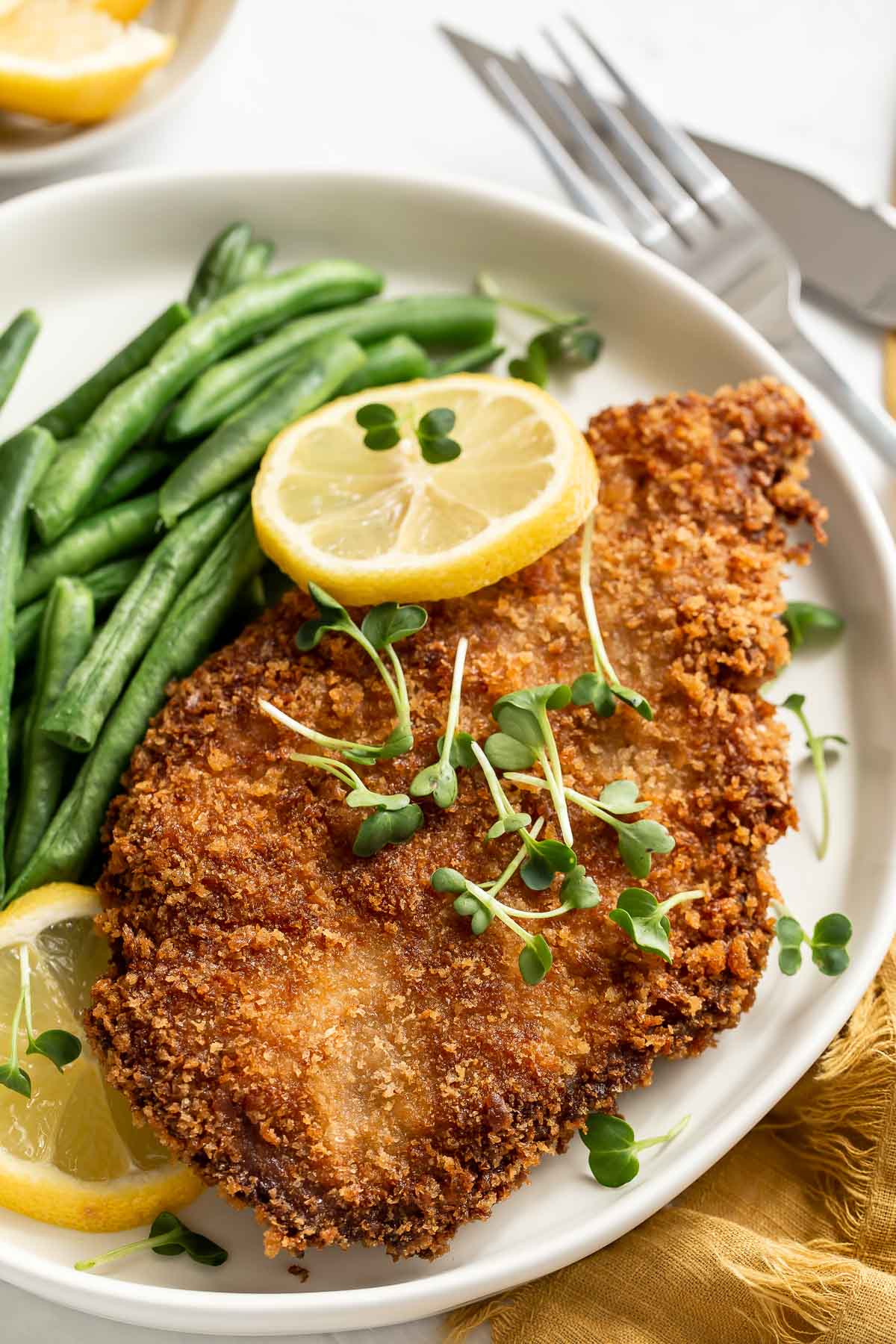 Now, can we make some schnitzel? Oh, how I love Schnitzel. My husband and I both have Czech backgrounds, so we cannot resist a plate of schnitzel with German potato salad and sauerkraut. This is a fantastic Sunday supper for us, and surprisingly easy to make for two. 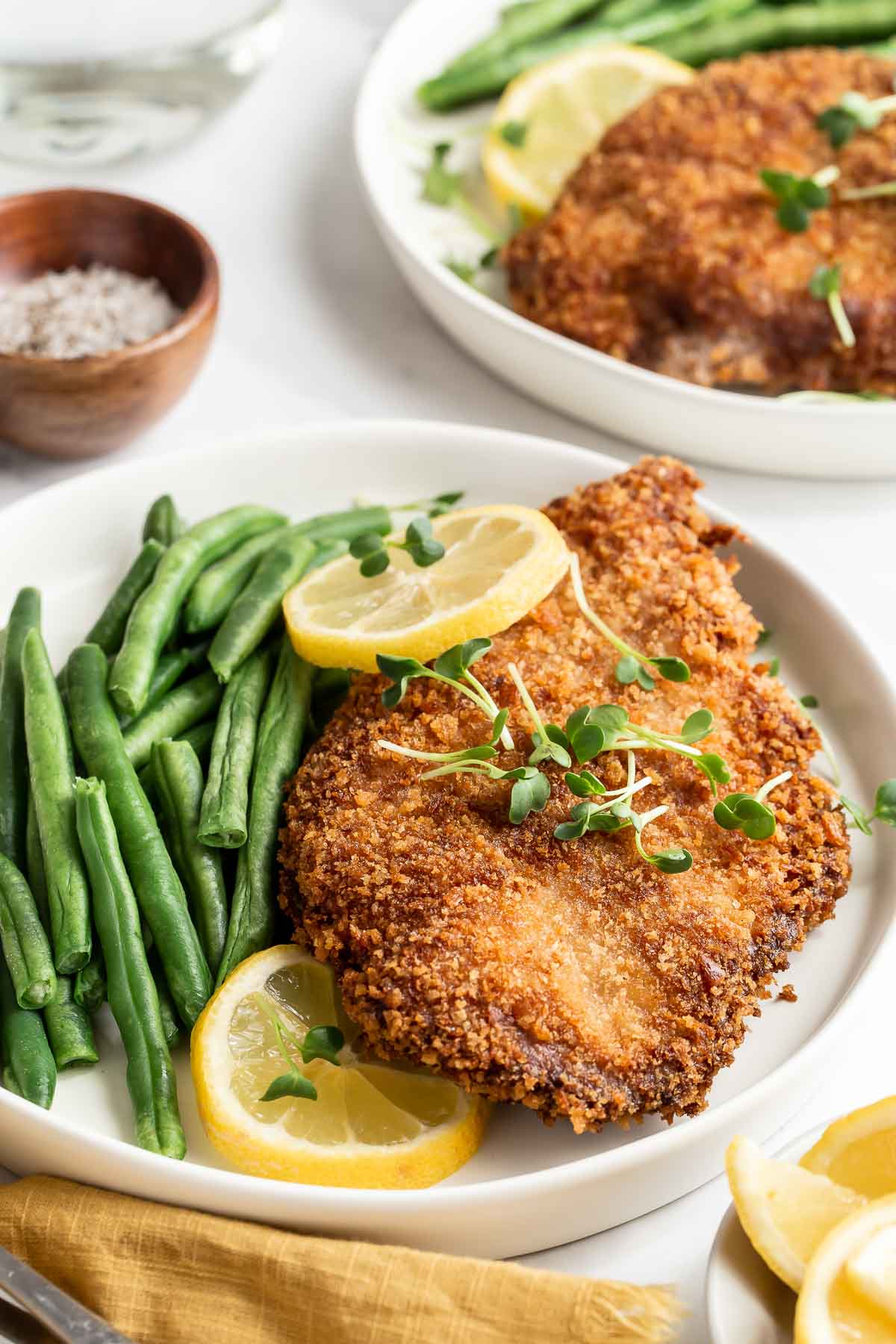 Which cut of pork is best for pork schnitzel?

When cooking pork schnitzel, it's best to use a small PORK TENDERLOIN. I love the marbling of a tenderloin, and you will not be disappointed with the flavor. Just make sure to cut it on a 45-degree angle before pounding. You can buy a larger pork tenderloin and cut as many pieces as you want to scale this recipe up for a crowd. I don't like pork chops for schnitzel because I find them too lean, and the fat is disproportionately around the edges.

What to serve alongside:

Pork Tenderloin: A small pork tenderloin that weighs less than 1 pound. Cut it in half on a 45-degrees angle, and then pound it until it's ¼-inch thick.
Panko Bread Crumbs: Sometimes called Japanese Panko bread crumbs. If you can't find them, use 3-4 slices of white bread ground them in a food processor, and then toasted in a low oven until crisp and dry.
Frying Oil: I recommend peanut or canola oil for frying.