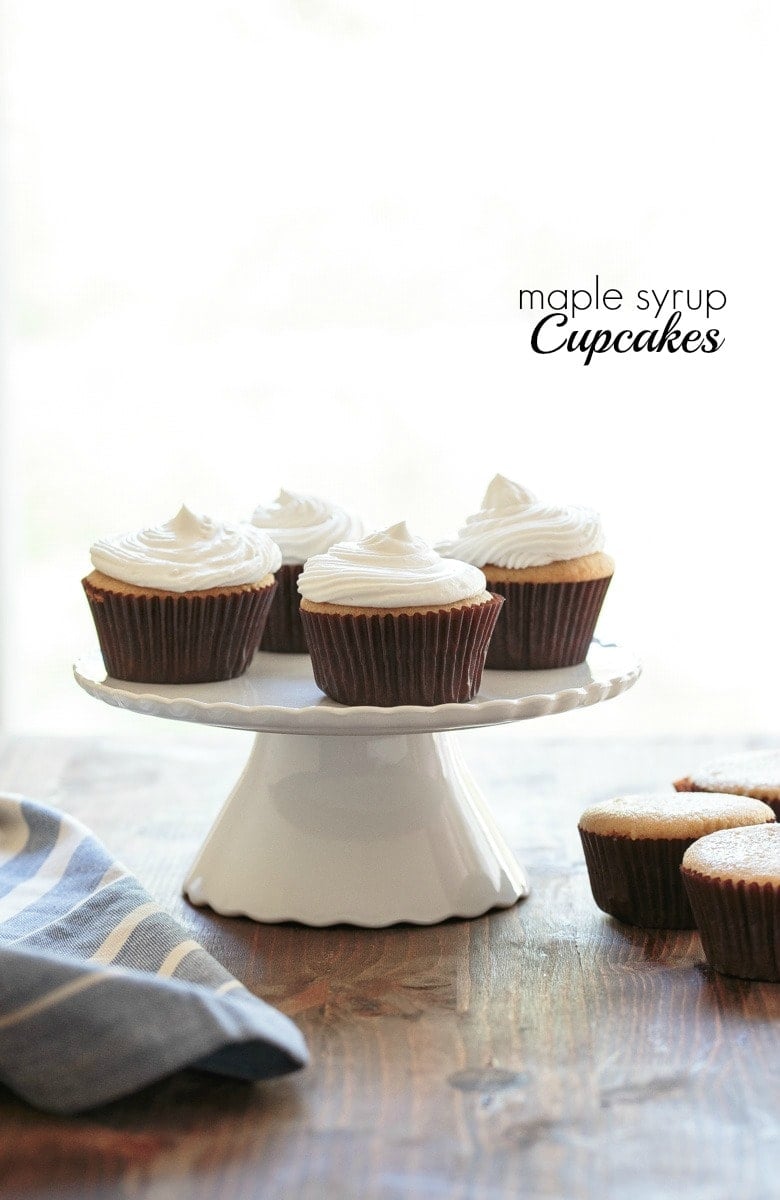 First birthday cake for baby is actually maple syrup cupcakes. They're naturally sweetened and the coconut whipped cream is so good! I'm re-sharing this recipe, and my sweet baby is now 2, not 1. All the tears.

That Mom that makes her kid a naturally-sweetened first birthday cake. Ugh. I kinda hate myself for this, except...these maple syrup sweetened cupcakes are DELICIOUS. You won't even notice they're not 'normal' cupcakes...you'll just notice the deep maple flavor. Even the raw batter is lick-able.

I like to think of them as 'better for baby' babycakes. Is the maple syrup sweetened coconut whipped cream on top too far? Wait, don't answer that. 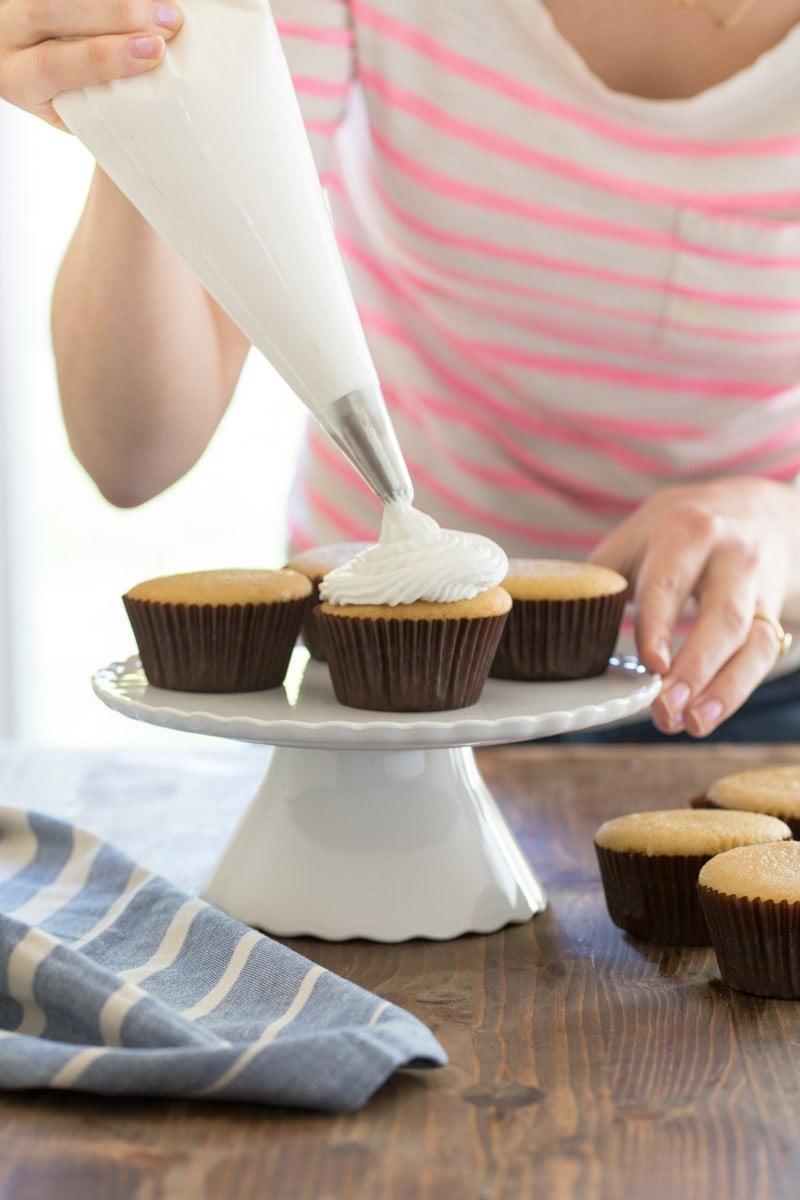 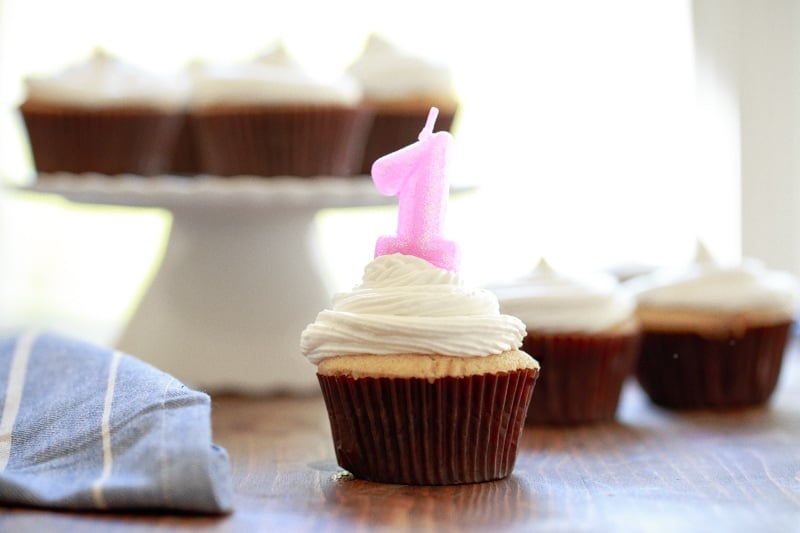 So, let's back up. I've told you before that I didn't read any parenting books before Camille was born. I only read books about how French children eat. Books like 'Bringing up Bébé' and 'French Kids Eat Everything.' All I knew is that I was NOT going to have one of those kids that only eats white foods. No no no. And I would never bring my kid to your house for a dinner party and pull out goldfish crackers and fruit snacks for Camille to eat instead of the homemade dinner you lovingly made. No no no again.

Anyway, those books told me that when you deny kids something (like sugar), they want it all the time. A little bit of the real thing in moderation sets them up for a lifetime of healthy eating habits.

And I've been denying her sugar anyway.

I just can't do it. She's such a good eater; I'm worried she'll stop eating her vegetables once she tastes sugar. Truthfully, that is what's holding me back. 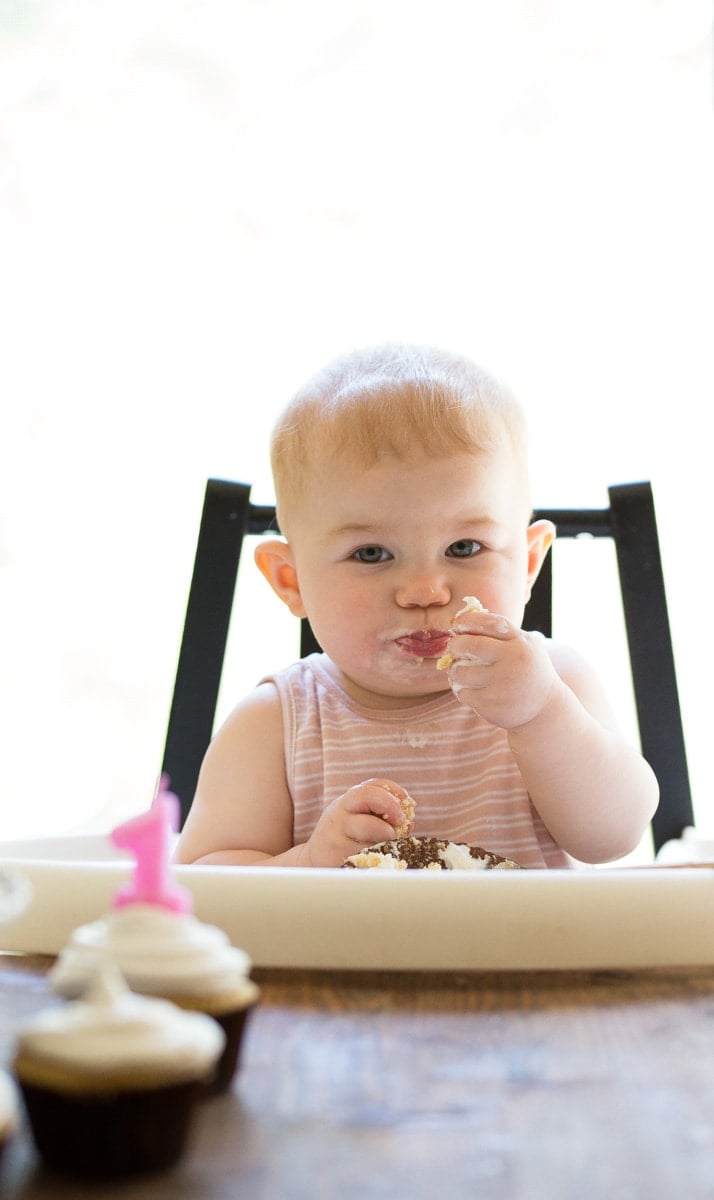 When she was 7 months old, I was licking an ice cream cone with her on my hip. She leaned in for a lick. She enjoyed it, but didn't beg for more.

Then, when she was 10 months old, I was making oatmeal cream pies from my cookbook, and she was parked on my hip while I was smooshing the marshmallow filling between the cookies. Out of nowhere, she just went for it. Both hands grabbed that cookie, and she knotted up her fists around it and started shoving it in her mouth as fast as she could. I couldn't really do anything but laugh. I felt like she earned it because she fought for it so hard and held it so tightly in those sweet little fists. I let her eat about ½ a cookie sandwich, which if you're doing the math (and I totally am), it was a whole cookie plus marshmallow filling. And I stressed about it so much.

I tried to get over it. Then, at 11 months, I was eating this caramel carrot cake during snack time and she was eating something boring like peas. I gave her 3 little bites of the cake without the frosting. She liked it, and asked for more.

And here we are. Maple syrup-sweetened cupcakes for baby's first birthday cake. Well, at least it's not whole wheat or gluten free, ok? I want her to know what real cake tastes like, after all. But side note: I did make these cupcakes for a kid's second birthday and used white whole wheat flour, per request. It totally works here, but they do taste kinda blah because of it. When I make it with regular all-purpose flour, they taste like a real cupcake that you would buy at a bakery. Yes, they are that good.

The frosting? It's nothing but whipped coconut cream and maple syrup. And it's so good, I'd eat it off a shoe.  I actually add it to my tea lattes during the afternoon sometimes.

My best friend Esther made her kid a watermelon cake frosted with yogurt and decorated with blueberries for his first birthday cake, and well, bless her heart. I think it's neat. Esther's kiddo had never had a drop of sugar on his first birthday. He probably still hasn't! I wish I could be more like Esther.

But I'm not. I'm a sugar pusher, baked-good peddler, making-my-living in the sugar bin gal. And it's time Camille found out.

And meanwhile, she was all 'THANK YOU JESUS FOR THE CAKE!' 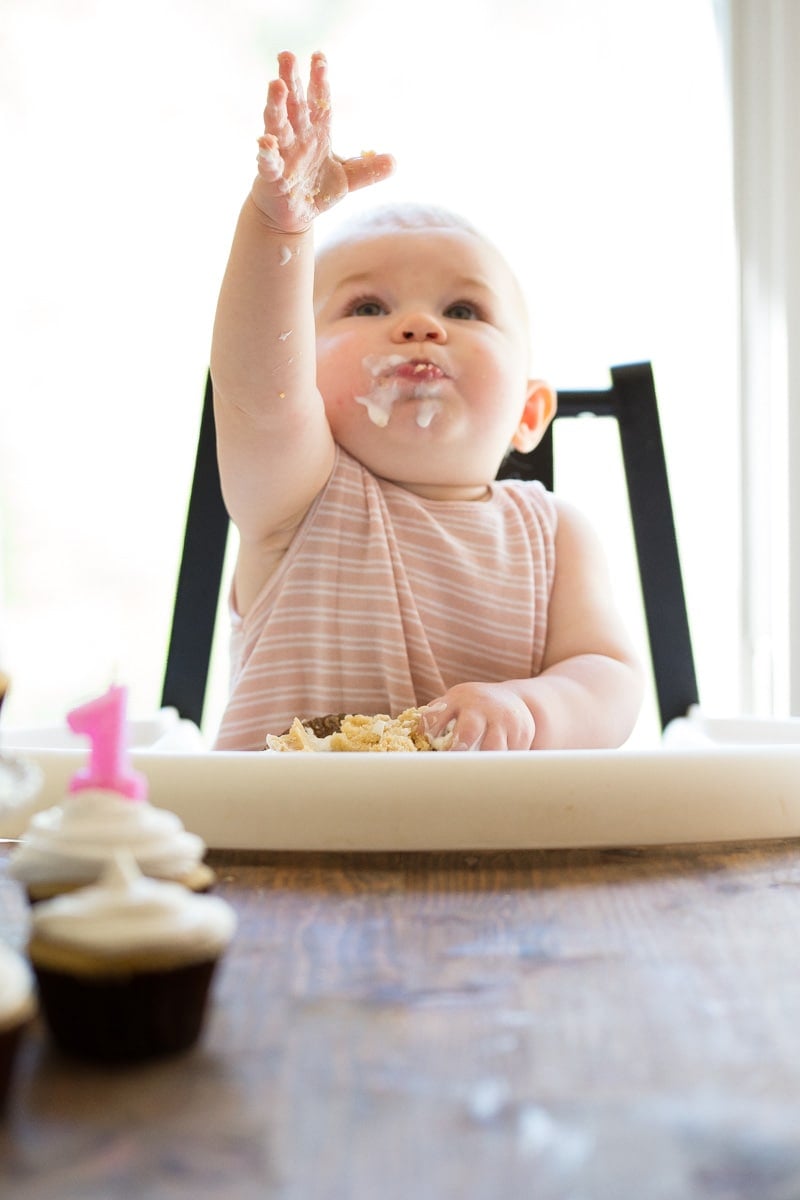 For the coconut whipped cream: