Vegan vanilla cake made without eggs! A small cake made in a 6 inch pan, but easily doubled or quadrupled for any pan size. It’s a vegan birthday cake for any size party! 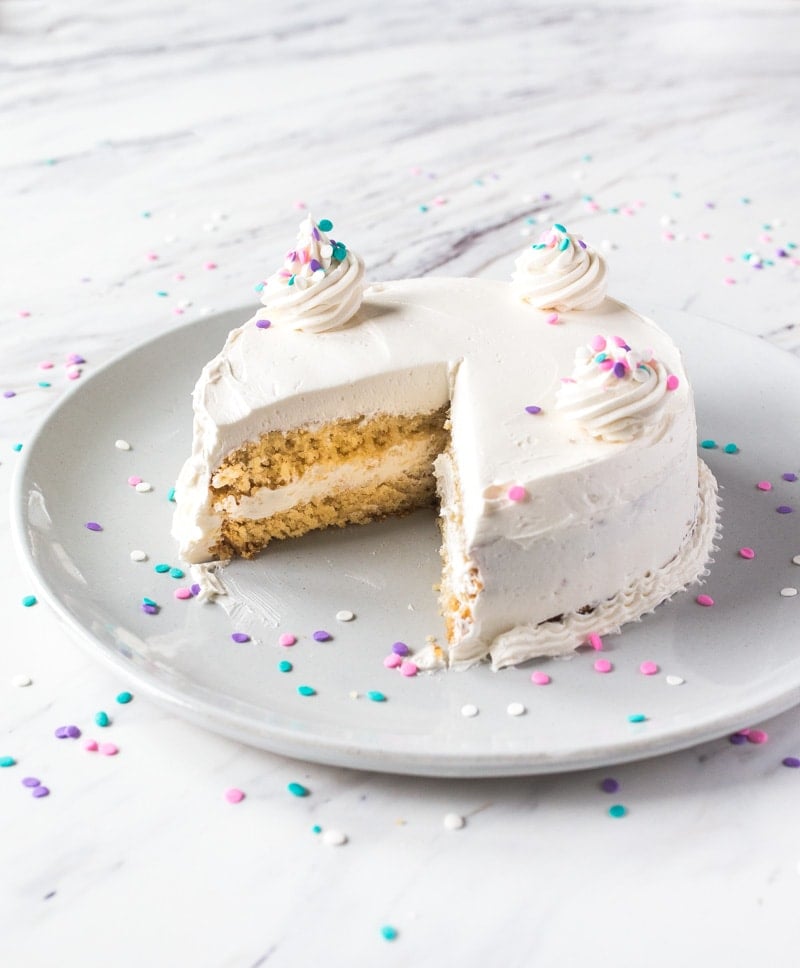 It turns out, if you make a vegan person vegan enchiladas and vegan chocolate cake, they're just going to want more vegan food. (If you're new here, I love butter and runny eggs, but my husband is a vegan).

It’s totally fine, though—I really don’t mind making all of my husband’s favorite cakes in a vegan version. And, as it turns out, we’ve had a lot of occasions where we have needed cake lately.

It could just be my imagination, but vegan baking is a lot easier than traditional baking. I don’t have to wait for butter and eggs to come to room temperature, and most of the recipes come together in just one bowl.

If all cakes were vegan, would I bake even more than I already do? (Most definitely). 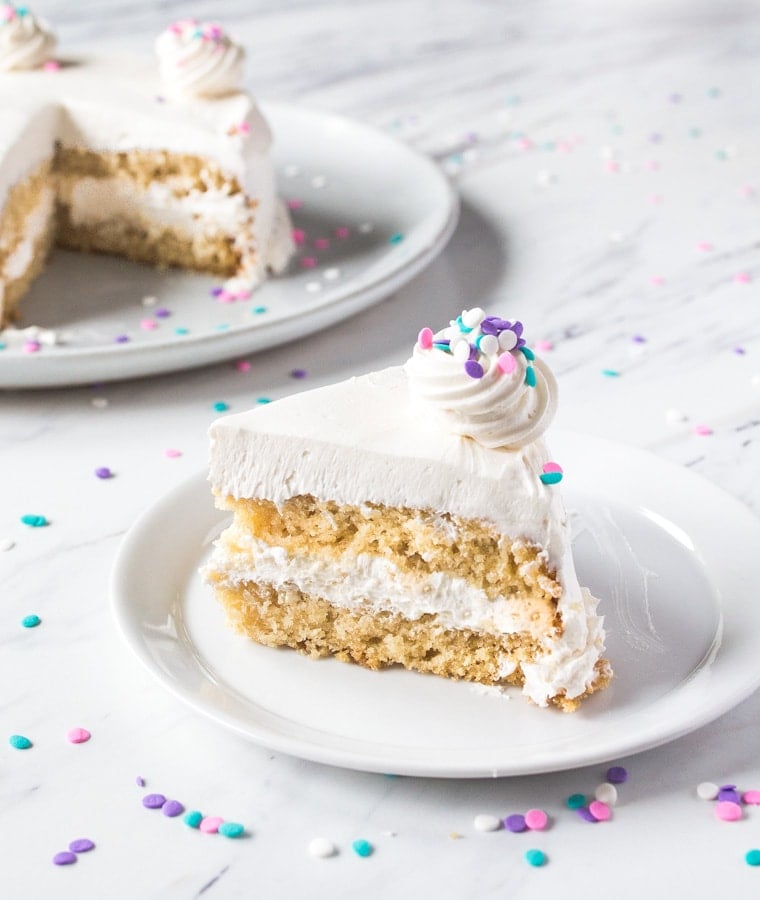 This cake is so quick to make! I had both the large vegan vanilla cake and the small batch version in the oven during the brief afternoon nap my son takes after lunch. The following day, I had both versions frosted and photographed before noon, even though my son chose to wake up from his nap an hour early. Maybe my baby smells cake in his crib, and I really can't blame him for waking up to that smell.

I know you’re going to ask, so I’ll mention that YES, you may stir sprinkles into the cake batter here, and make a vegan confetti cake! If you’ve had your eye on my mini funfetti cake, but have always wanted a version without eggs or dairy, today is your lucky day! 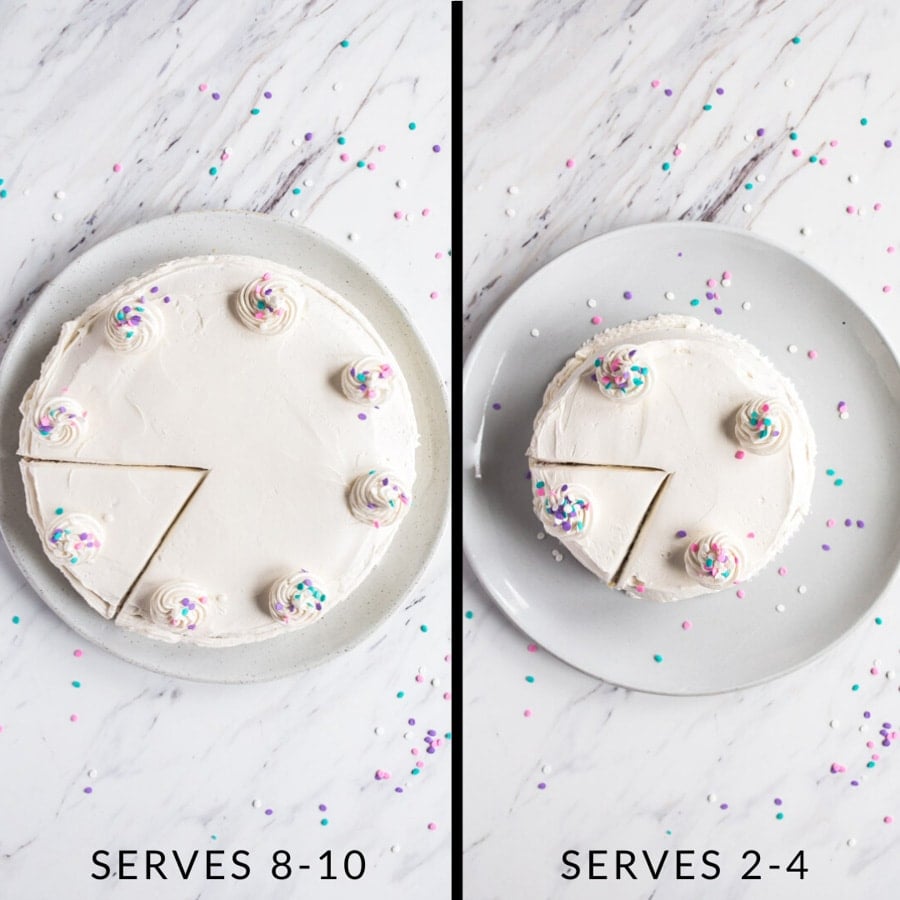 How to scale down a cake recipe:

Typically, when I scale down a cake recipe to a small 6 inch cake, the recipe divides in half easily. In the case of my vegan chocolate cake, the 6 inch and 9 inch version are the same recipe doubled. However, when it comes to this vegan vanilla cake, everything is doubled when scaling up—except for the vinegar!

For changing the cake size, the same instructions for most of my small cake recipes apply here:

-The recipe below is for one 6 inch small cake. Slice it in half and fill with buttercream to make it a layer cake as seen in the photos.

-If you double the recipe below, you'll get one 9 inch cake. However, be sure to only use 1 tablespoon of vinegar, not 4 teaspoons, if doubling. If you quadruple the recipe, you'll get two 9 inch layer cakes, just like a normal layer cake. Or, you can double it and bake two 6 inch small cakes for stacking higher.

Why do vegan cake recipes have vinegar?

I'm so glad you asked this question! You see, most regular non-vegan cake recipes contain a dairy product. Dairy products are acidic, and as such, they react with the leaveners in a recipe (the baking soda and baking powder). But since vegan cakes don't have dairy, we add a very small amount of vinegar to the cake batter to activate the baking soda. Cool, right?

For the vegan vanilla buttercream:

Preheat the oven to 350, and place an oven rack in the center position of the oven.

Spray one 6" cake pan with 2" sides with cooking spray, and then line the bottom with a circle of parchment paper and spray again.

In a large bowl, whisk together the flour, sugar, baking soda and salt.

In a large measuring cup, whisk together the milk, vanilla, oil, and vinegar.

Slowly pour the wet mixture into the bowl with the dry ingredients while whisking. Whisk until the cake batter is mostly lump-free, but try not to mix too much and make a dense cake batter.

Scrape the batter into the prepared cake pan, and bake on the center rack of the oven for 25-30 minutes, until a toothpick inserted into the cake comes out clean.

While the cake cools, make the frosting: beat together the softened 'butter' with the powdered sugar, vanilla, pinch of salt and splash of milk. Add extra milk if needed to bring it together.

Once the cake is cool, slice it in half horizontally. Place the bottom of the cake on a plate, and scoop ⅓ of the frosting on top. Spread the frosting almost to the edges. Place the remaining cake layer on top, and frost with the remaining frosting. If desired, portion some frosting into a bag fitted with an open star tip and decorate the cake with buttercream swirls and sprinkles.

To double this recipe, double it exactly, but instead of 4 teaspoons of apple cider vinegar, use just 1 tablespoon.