Maple bacon cupcakes are soft, tender maple flavored cupcakes with a small amount of bacon grease in the batter. Then, the frosting is maple flavored and crowned with a candied maple bacon piece. It's like your favorite donut, but in cupcake form! The recipe makes 10 delicious cupcakes. 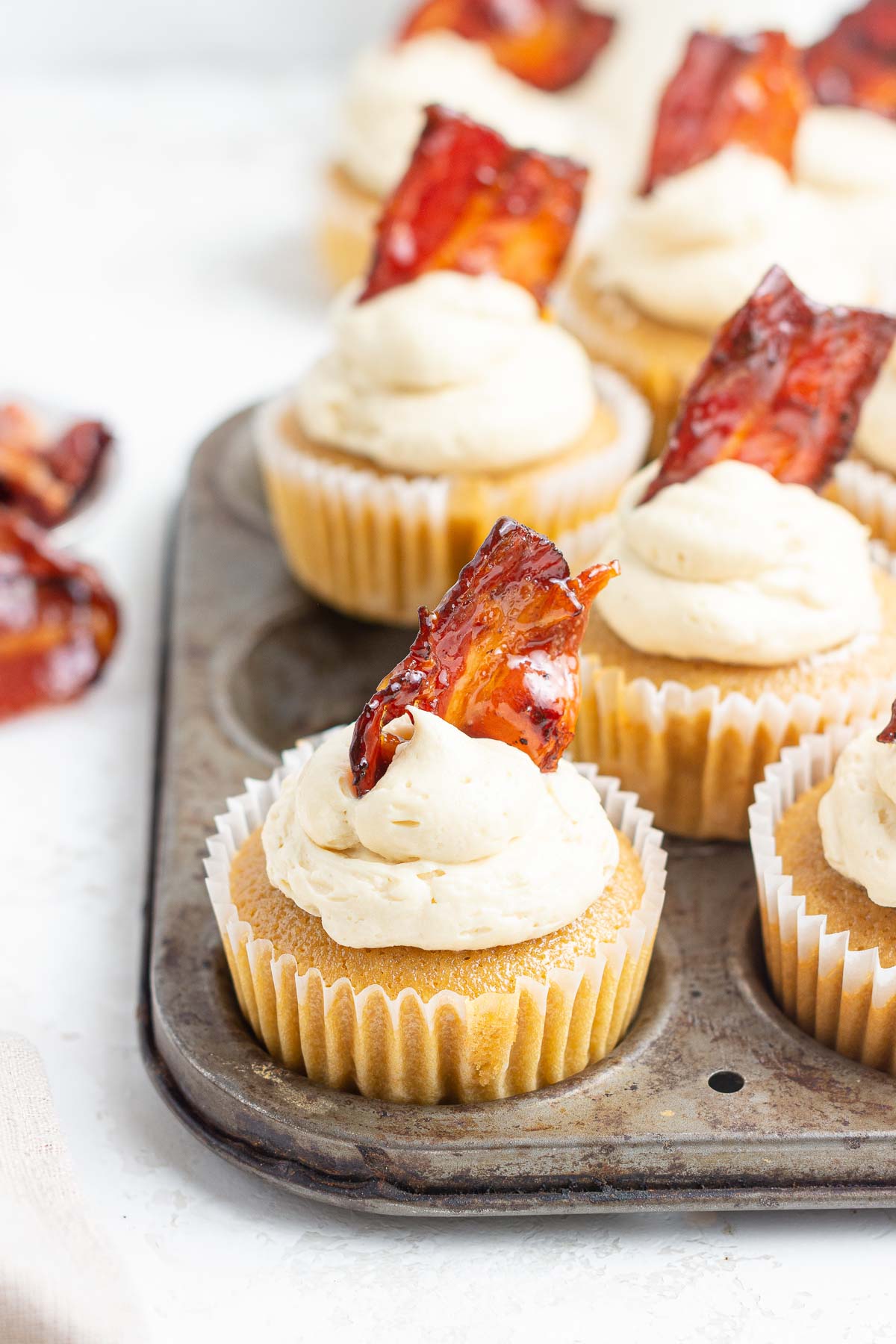 I have a lot of love for cupcakes made with maple syrup--the ones that I use for baby's first birthday cake, specifically. Everyone who eats them at my kids' birthday parties comments that the cupcake is so good! They don't even notice that it's made entirely with maple syrup, and no other sugars!

When we use all liquid sweetener, like maple syrup, we get soft, tender cupcakes that have the best almost cotton-like texture. I cannot stop eating these maple cupcakes, plain. There is one difference between these cupcakes at the ones I make for the kids: this cupcake has one tablespoon of bacon grease stirred into the batter. This is the first step to making these cupcakes maple bacon flavored.

These cupcakes are inspired by a maple bacon donut that I love at a friend's donut shop. The way my friend candies the bacon slices in maple syrup made me realize that it needed to be the crown on top of these maple bacon cupcakes!

These cupcakes are simply maple flavored because they're made with maple syrup, though they do contain a single tablespoon of leftover bacon grease from making the cupcake toppers. The buttercream itself is maple buttercream, and the candied bacon piece on top is the salty bite this cupcake needs.

This maple bacon cupcake recipe makes 10 cupcakes, but you can double it. Be sure to follow the directions, and make the bacon toppers first. You need the bacon grease from the pan for the cupcake batter, so don't make this recipe out of order. If you're looking for a delicious way to use the rest of the bacon package, try my chicken bacon pasta for two!

How to make maple bacon cupcakes: 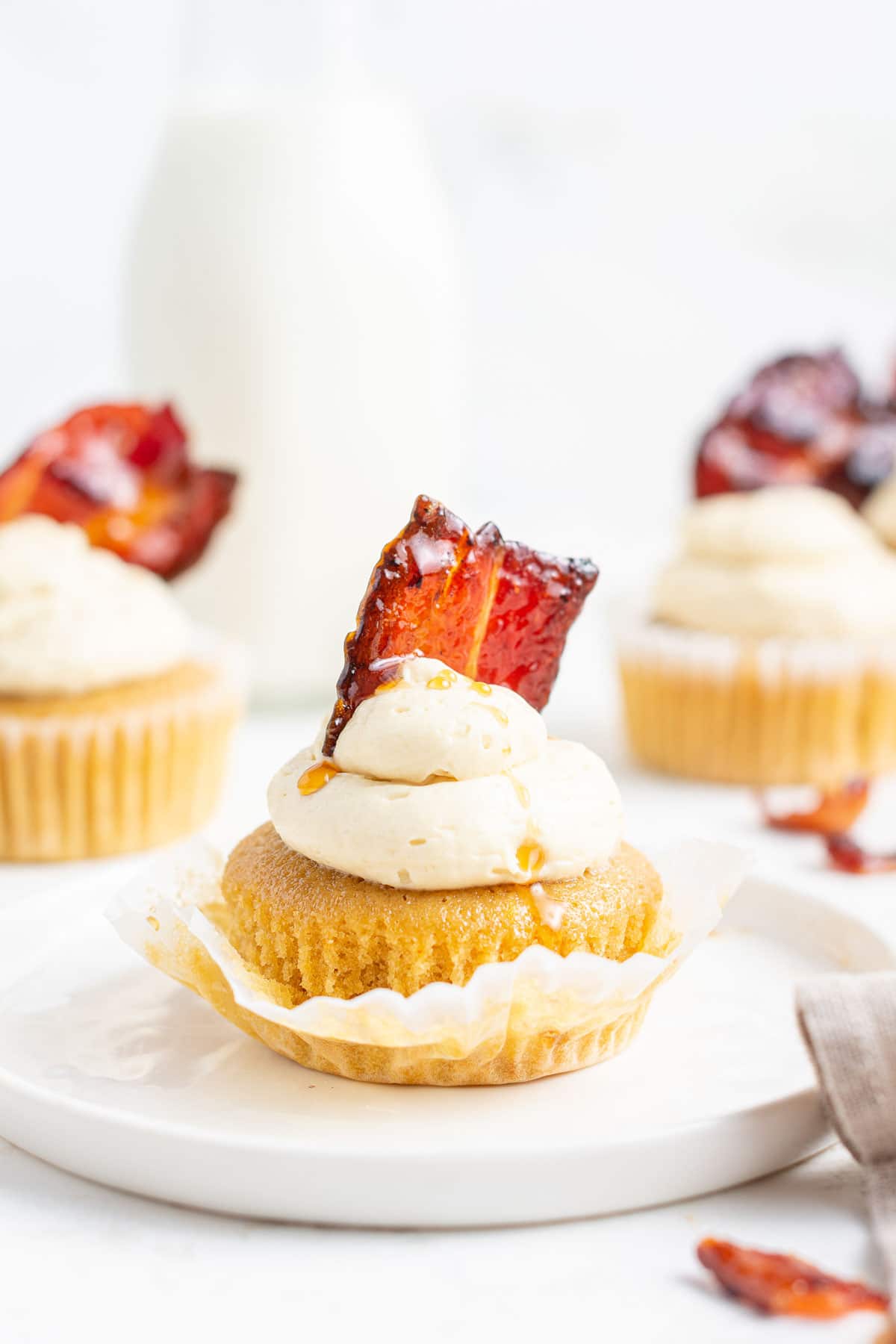 Can you make these ahead of time?

You can definitely make and freeze the maple bacon cupcakes ahead of time. Freeze them in air-tight containers for up to one month. To use, defrost overnight on the counter, and then frost with maple buttercream. The crisp bacon piece on top is best made the day you plan to serve the cupcakes.

Can this recipe be doubled?

Yes, you can double this recipe and make 20 cupcakes for a larger party.

For the maple buttercream:

1. First, make the bacon: Cut the bacon slices in half to make 10 equal-sized pieces, and place them in a skillet, not touching each other. Turn the heat to medium, and cook the bacon, flipping often, until it’s cooked all the way through, and just starting to turn crisp around the edges, about 7-10 minutes. When the bacon is done, turn the heat off. Pour off the bacon grease and reserve 1 tablespoon for the cupcakes. Leave the bacon in the pan. Drizzle 2 tablespoons of maple syrup over the bacon slices, and turn the heat back on to low. Bring the mixture to a simmer, allowing the bacon pieces to cook in the maple syrup and become sticky, about 4-5 minutes. Remove the bacon pieces from the skillet, and set aside to cool. 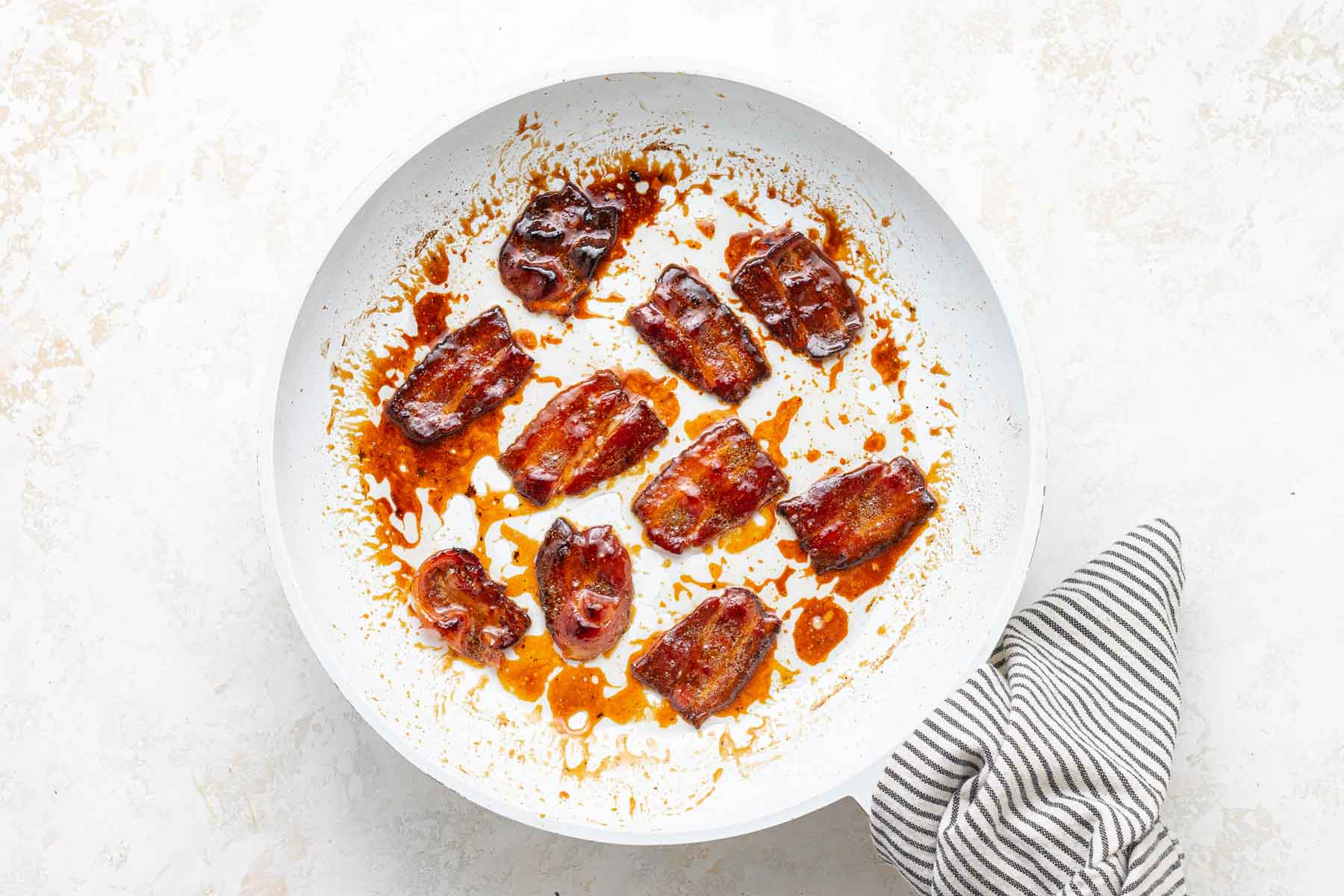 2. Preheat the oven to 325, and place 10 cupcake liners in a cupcake or muffin pan. Gather all ingredients to make the cupcakes. 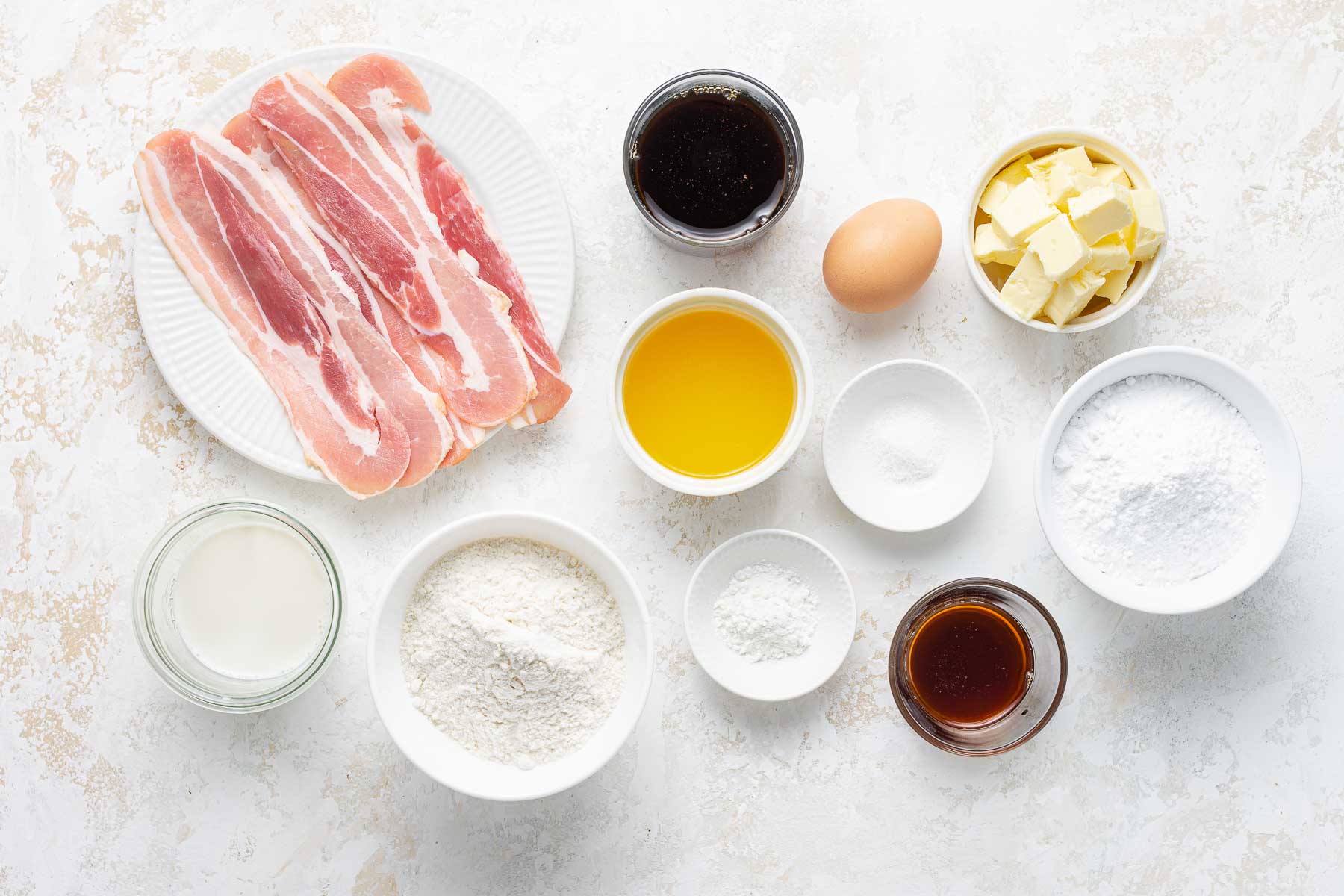 3. In a medium bowl, add 3 tablespoon of the melted butter, maple syrup and egg to the bowl, and whisk very well until well-blended. 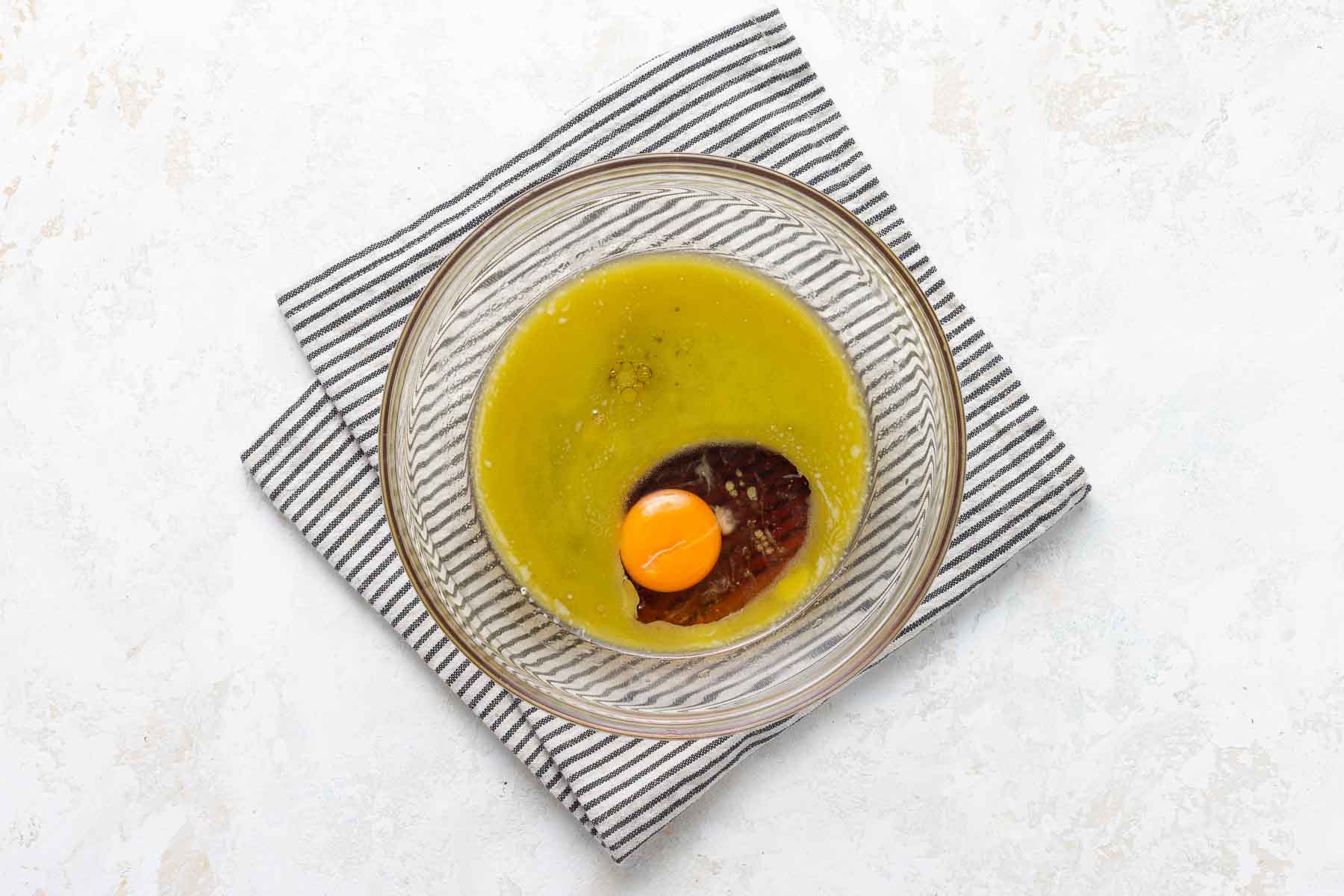 4. Whisk in the reserved 1 tablespoon of bacon grease, and whisk again.

5. Sprinkle the flour, baking powder, and salt evenly over the mixture in the bowl. Whisk in the flour while slowly pouring in the milk. Whisk until combined. 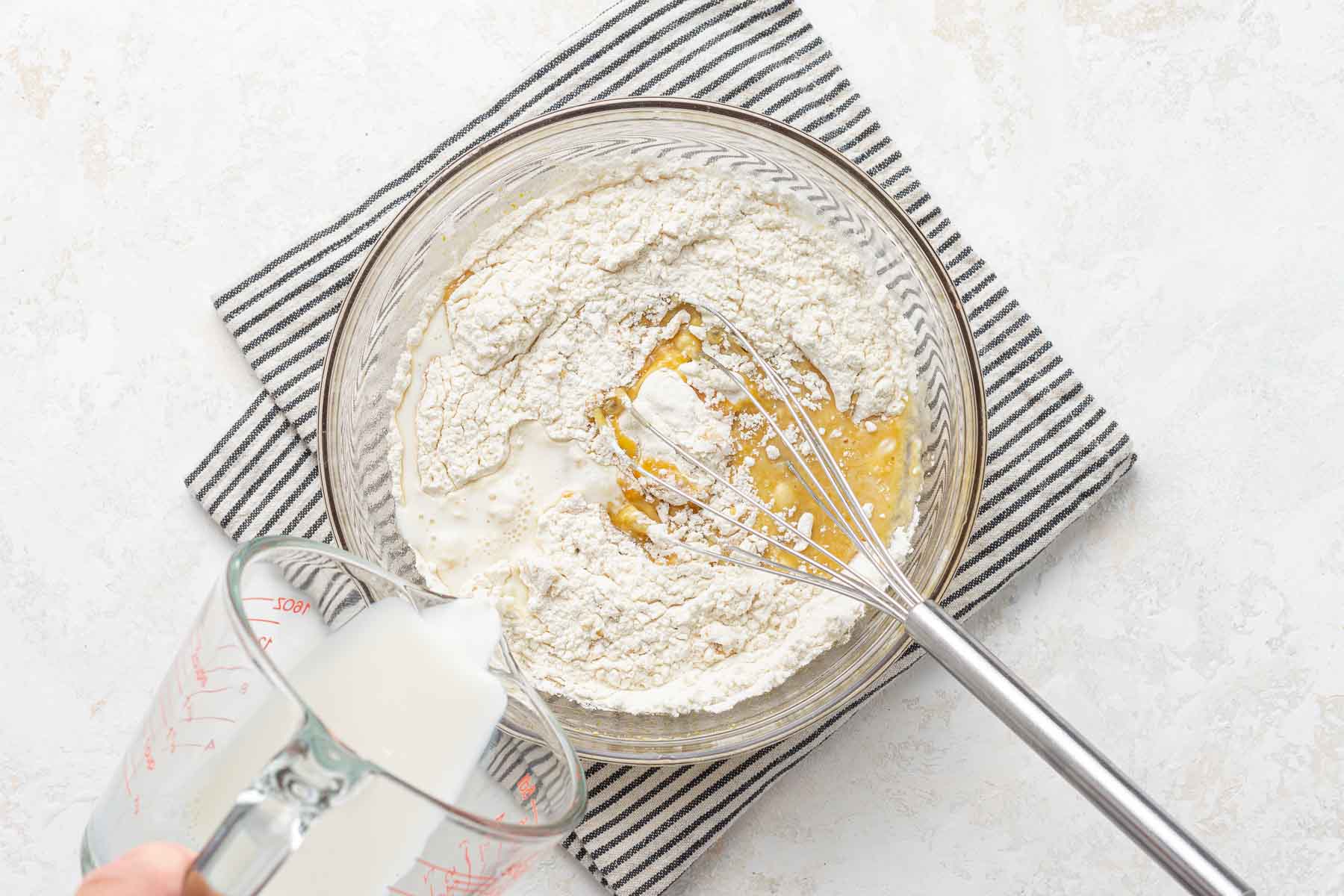 6. Divide the batter evenly between the 10 cupcake liners. 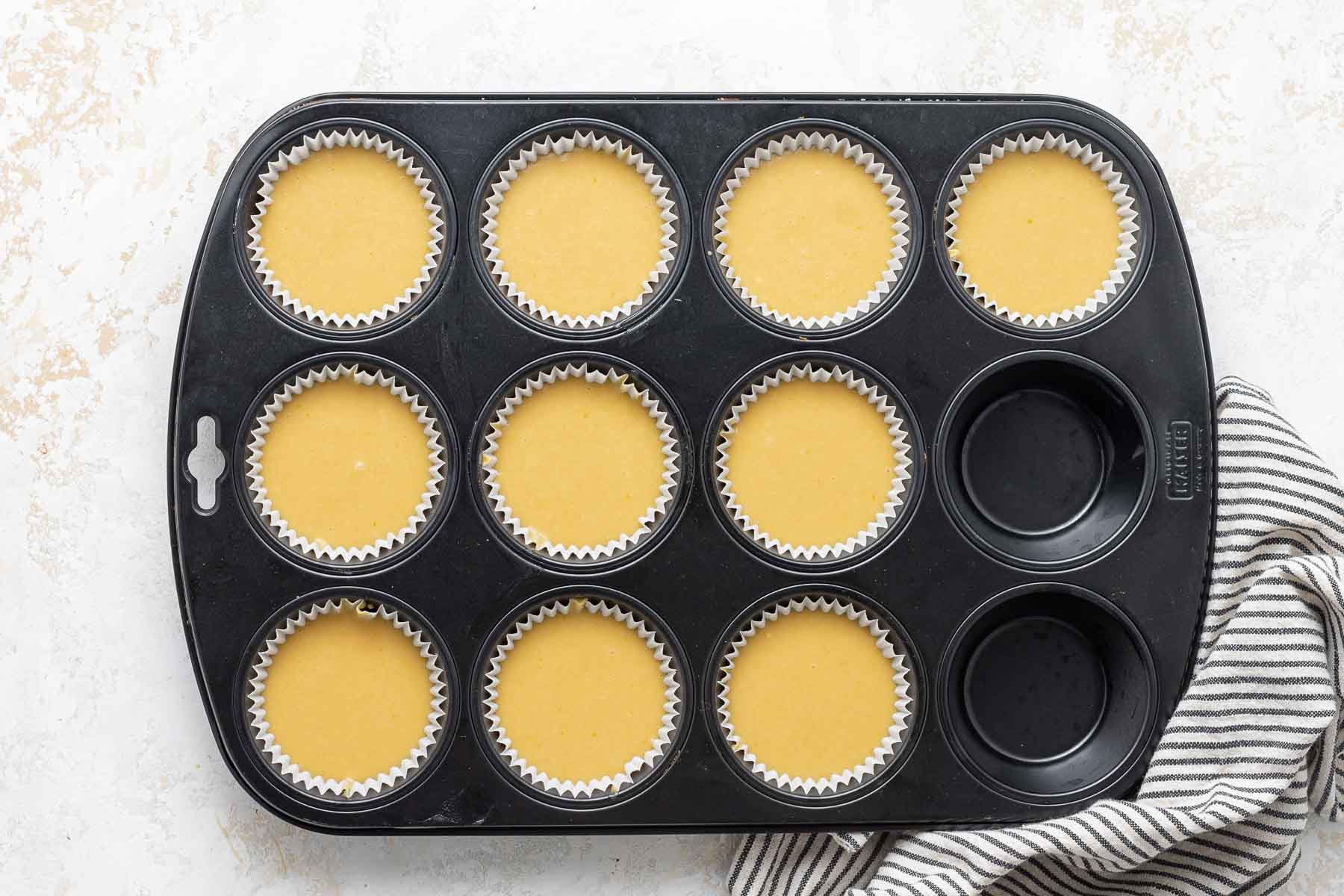 7. Bake for 19-20 minutes, or until a cake tester comes out clean. Once the cupcakes are cool, you can make the maple buttercream. 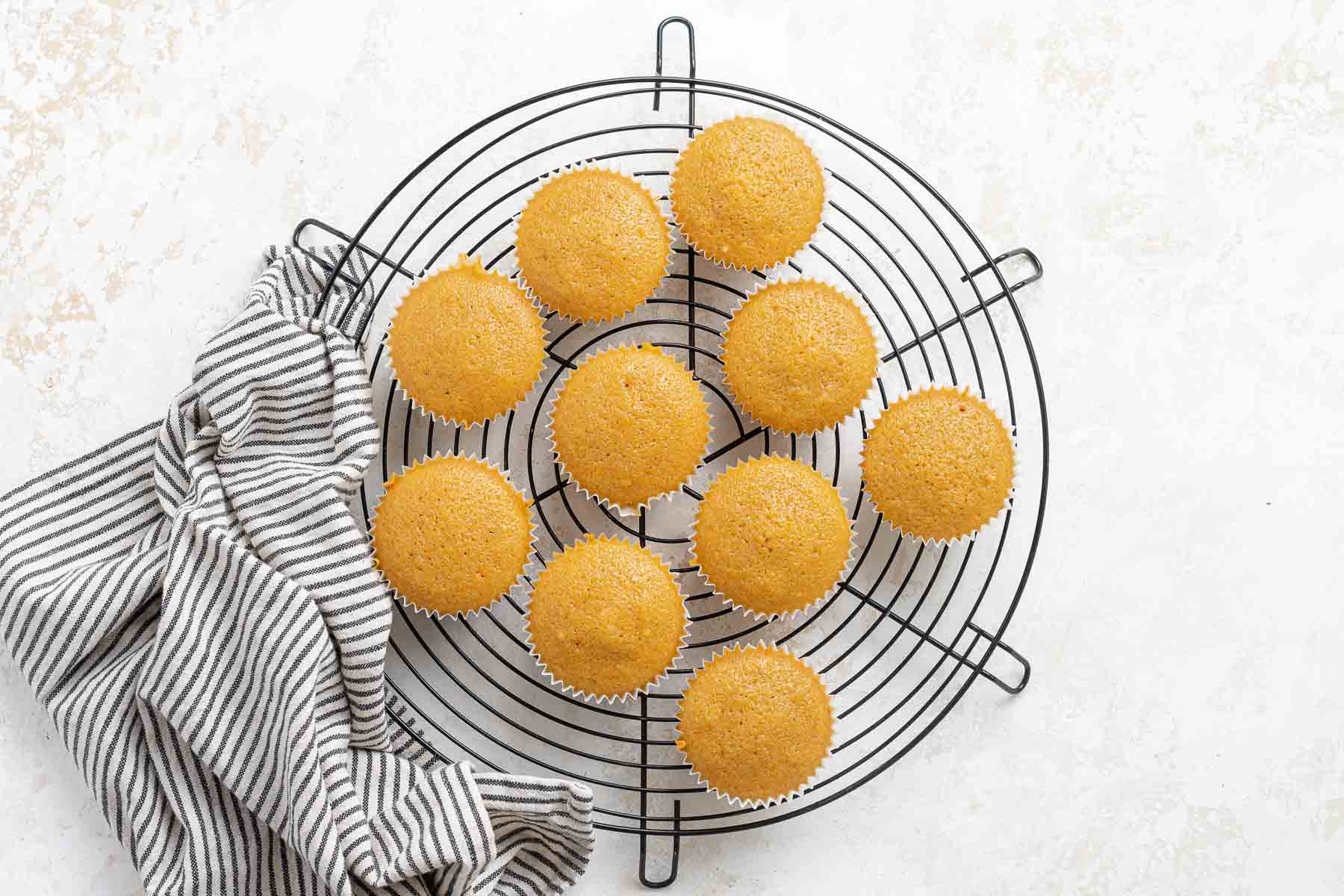 8. Make the frosting: beat together the softened butter, powdered sugar, 2 tablespoons of the maple syrup and salt using an electric mixer. If the mixture seems too stiff, drizzle in an extra tablespoon of maple syrup until it’s soft and fluffy. 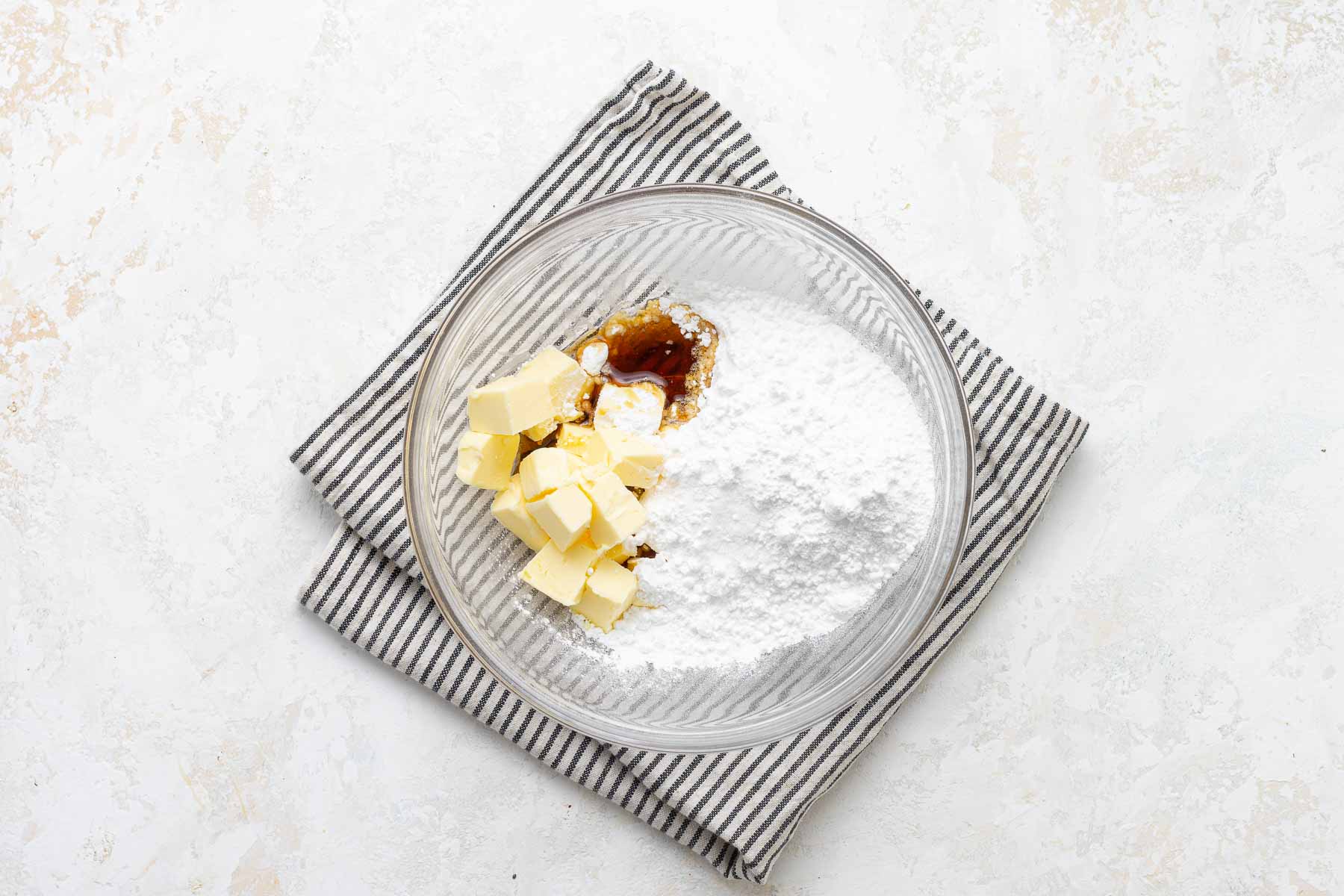 10. Scrape the buttercream into a piping bag fitted with a round tip. Decorate the cupcakes with the buttercream by making one large dollop, follwed by another smaller dollop, right on top. Decorate each cupcake with a piece of candied bacon, and serve. 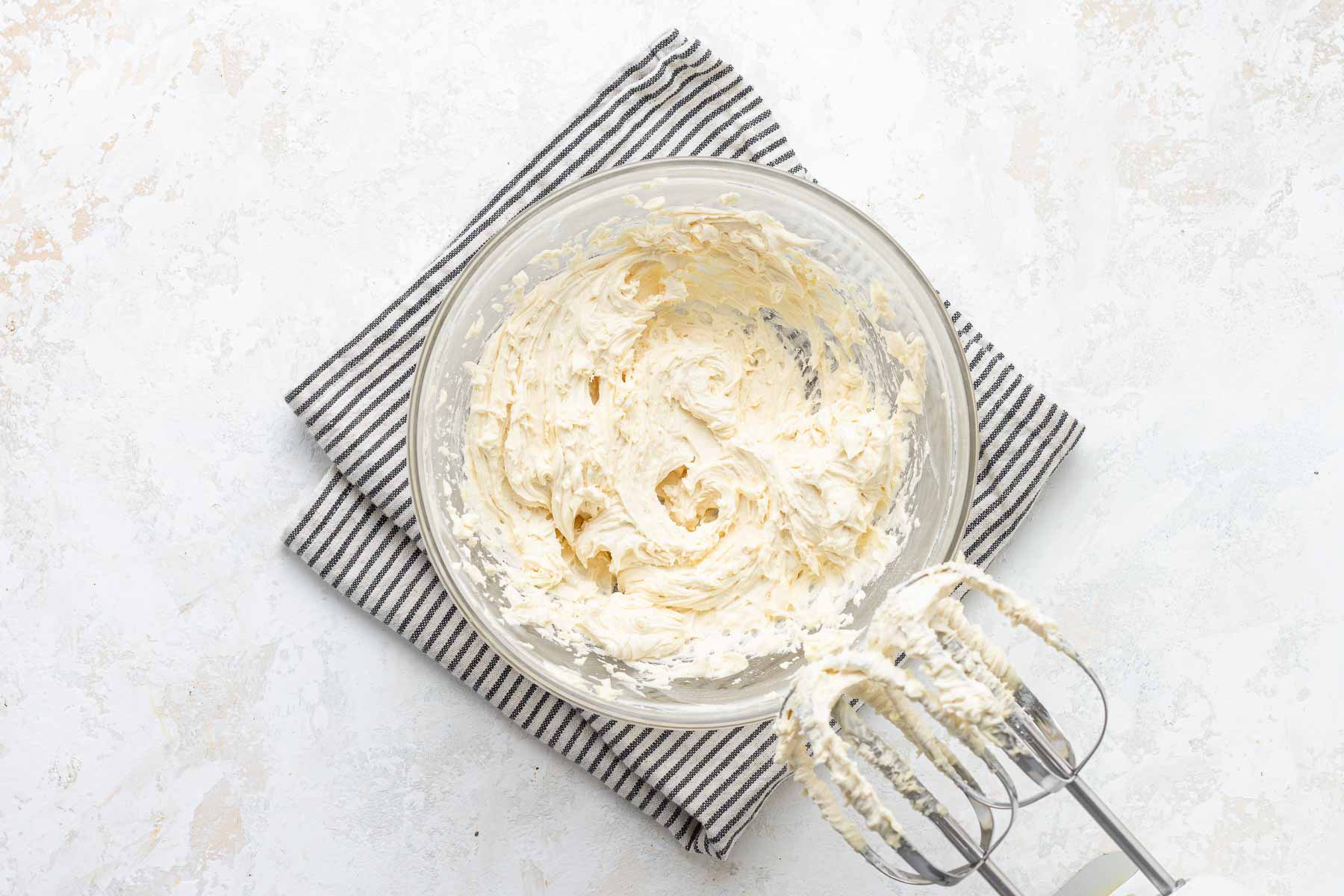 sliced bacon: Just 5 slices of bacon, thick-cut is always best. We're placing a half slice on each cupcake, so 5 pieces makes enough cupcake garnishes for 10 cupcakes.
unsalted butter: Part of the butter (3 tablespoons) doesn't need to be softened because we will be melting it for the cupcakes. The other part (7 tablespoons) should be softened for the maple buttercream after the cupcakes are baked.
maple syrup: Both grade A or grade B maple syrup will work here. Personally, I prefer the grade B because it's harvested later in the maple tapping season, and the flavors are more complex. The grade A maple syrup is slightly thinner and is simply sweet. Use whatever you have, but make sure it's real maple syrup, not pancake syrup or an imitation of maple syrup.