This recipe for small batch vanilla cupcakes is going to be the best Valentine's Day dessert for two! This recipe makes 4 fluffy, soft vanilla cupcakes. It's great to make with kids, and the perfect portion for two people to enjoy. Don't sleep on the vanilla buttercream frosting on top!

In 11 years of running this small batch dessert recipes website, I have never shared a small batch vanilla cupcakes recipe. Isn't that crazy? Maybe it's because my head is in the clouds with my lemon cupcakes or my chocolate and blackberry cupcakes. Or, maybe it's because I have been appeasing the chocolate lovers so much here on this site, that I completely neglected vanilla.

Whatever the reason, the wait is now over. Truthfully, I've been making my small batch coconut cupcakes and leaving out the coconut to make my own little vanilla version for years. In an instant, I will choose a vanilla dessert over a chocolate one. My love for an authentic rich, vanilla cupcake recipe is deep.

These vanilla cupcakes come together in just one bowl, and they're made with pantry ingredients that I'm sure you already have. You can add sprinkles to the batter, mini chocolate chips, or even scoop out the center using a piping time to fill with any type of filling your heart desires.

This recipe can be endlessly adapted and made your own! If you're looking for my small batch chocolate cupcakes, I have those, too. This recipe is written in metric and U.S. cups and spoons so that you have guaranteed success.

While most cupcake recipes contain milk, this recipe does not. I find that when I leave out the milk, the top of the cupcakes get the slightest sugar crisp crust, and they're insanely delicious. Muffins should have super soft tops, but cupcakes should have a sugar crust--trust me on this!

In case you don't want to make vanilla buttercream, you can try instead: 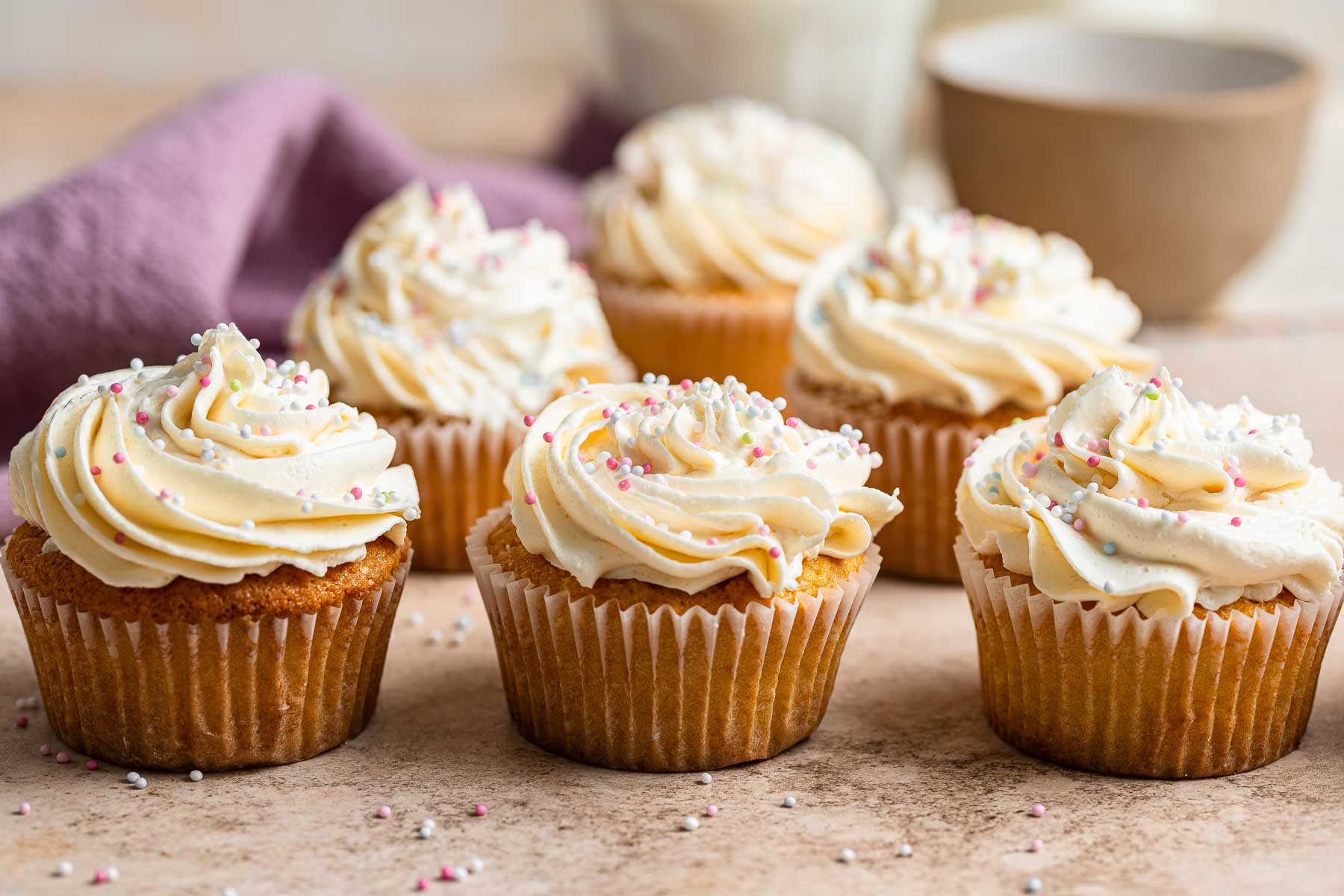 Can you make these small batch vanilla cupcakes with chocolate frosting?

I hear you and I see you, chocolate lovers! Make this cupcake recipe, and then use the chocolate buttercream recipe from my Football Cupcakes.

Can I get this small batch vanilla cupcakes to yield 6?

Gosh, I'm sorry I developed this recipe to make 4 cupcakes! Why don't you double it to make 8, and then eat 2 before anyone knows you baked? Or, you can stash them (unfrosted) in the freezer. You're doing great! yes, the photo above has 6 cupcakes, but that's because I doubled the recipe for photography.

For the vanilla frosting:

Oil: Any flavor-less oil, like safflower, canola, or avocado oils all work. You can use melted butter, too, but the cupcakes will firm up if refrigerated when made with butter.
Egg: One whole large egg.
Heavy Cream: This is to lighten and make the vanilla buttercream super fluffy. You can use milk in its place, if you don't have it.

If you like this, be sure to check out my entire collection of Small Batch Cupcakes here.