Vegan pumpkin cheesecake bars (small-batch) that are entirely no-bake and made with cashews and coconut. 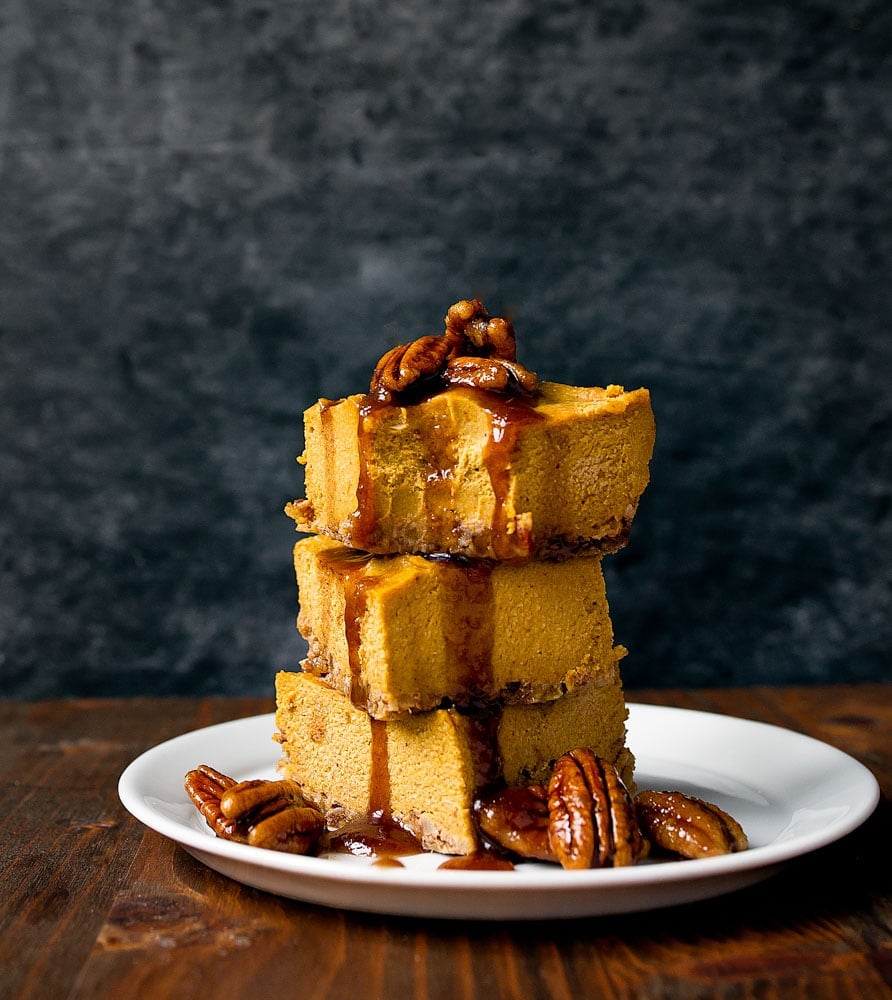 Why vegan pumpkin cheesecake bars? I mean, I don't really know. My kid just discovered cashews the other day and she is freaking obsessed. She was asking for a snack, and so I introduced her to trail mix. We went through the pantry to find things to toss in a bowl. (If you didn't know, a 2-year old's favorite thing to do is stir things in a bowl).

We found the biggest bowl in the kitchen, and tossed in freeze-dried blueberries, pretzels, raisins, coconut flakes, and chocolate chips (yes, really). Since I'm always thinking about protein for my little vegetarian, I went through my freezer to find a nut that might work for her. I found some raw cashews, and toasted them in a dry skillet with some pink salt. I crossed my fingers as she took her first bite. She loved them! I'm so elated that she likes nuts in their whole form! (I mean, girlfriend can take down some peanut and almond butter, but I was hoping to expand her nut horizons).

For 3 days straight, she asked for cashews at snack time. I left the bag on the counter one morning and started to think about how I could incorporate them into a dessert for her.

Couple this with a nagging complaint for pumpkin pie from Camille. Last Thanksgiving, I made a pumpkin pie (as I'm sure you did, too, but was yours a orange-spiced pumpkin pie with coconut?). I also bought a can of squirt whipped cream, which I almost never do, but when you're making an entire Thanksgiving for Two from scratch, you take some help, right? After a bit of wine (or maybe it was the turkey), my judgement slipped and we thought it would be funny to teach Camille that squirting canned whipped cream directly into your mouth is one of life's simple pleasures.

She giggled wildly. Oh gosh, did she ever giggle. And begged for more more more.

It's been months since November, and would you believe that she still asks for pumpkin pie on occasion? I'm 99% convinced it's the whipped cream that she's really asking for. I haven't bought a can of whipped cream since then, but I did finally cave and buy her some pumpkin. I mean, it's after August 1st, right? 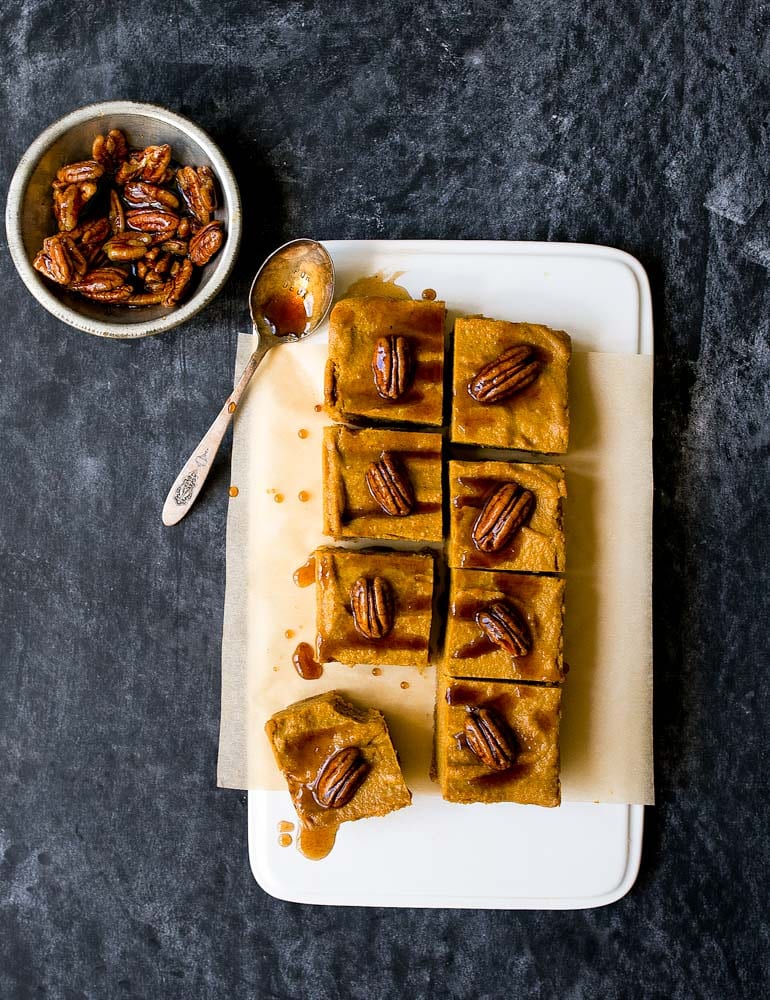 You might already know this, but you can soak cashews in hot milk and blend them up into something that resembles cream. It's kinda wild. I remember my roommate in grad school doing it one night, and I was like 'what is this sorcery? Gimme more.'

So, the vegan pumpkin cheesecake bars (no bake) recipe was born. These cheesecake bars are entirely no-bake, and since pumpkin is a vegetable, I want you to enjoy them for breakfast.

The crust is the only thing that might trip you up. I wanted to keep these almost raw (and worthy of a healthy breakfast), so I used dates and pecans, pulsed in the food processor with a touch of warm water. But, like, that doesn't really make an authentic cheesecake crust. So, don't expect that. Expect a cool, creamy and rich pumpkin cheesecake that doesn't require a trip to the oven. Expect to be okay with the fact that it's only August and you're already enjoying pumpkin.

The maple-syrup doused pecans on top are entirely optional. The recipe comes from my melting sweet potatoes (which if you haven't made those yet, get yourself a couple pounds of sweet potatoes and prepare to give yourself fully to the love that exists within a yam. My father-in-law detests sweet potatoes, but gave these a shot a few years ago and has been eating them ever since. They're magical).

So, let's wrap up: almost raw vegan pumpkin cheesecake bars. With a maple pecan sauce on top. For you, your vegan friend, your kid who loves cashews, or anyone that scoffs at pumpkin before the first day of Fall.

For the pumpkin cheesecake:

For the maple pecans on top: